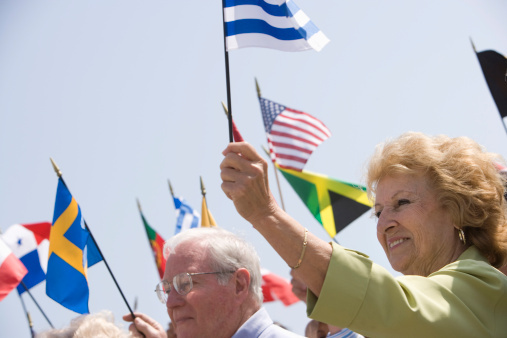 The Saints knew that the Lord had told them to be "subject to kings, presidents, rulers, and magistrates, in obeying, honoring, and sustaining the law." That commandment, revealed then, is true now of our members in every nation. We are to be law-abiding, worthy citizens.

We believe in being subject to kings, presidents, rulers, and magistrates, in obeying, honoring, and sustaining the law (Articles of Faith 1:12).

Read the following statement to your family:

"We urge Church members to register to vote, to study the issues and candidates carefully and prayerfully and then vote for those they believe will most nearly carry out their ideas of good government. Latter-day Saints are under special obligation to seek out and then uphold leaders who will act with integrity and are 'wise,' 'good,' and 'honest' (see Doctrine and Covenants 98:10)." (Gordon B. Hinckley, Thomas S. Monson, and James E. Faust, Priesthood Bulletin, 30 August 2002.)

Have a family member express in his or her own words what the First Presidency wants us to do about political elections. How might following this counsel bless us as a people? As a family, read Alma 2:1-7. Ask:

Invite your family to mark footnote 7a in their scriptures; then read Mosiah 29:25-27.

Discuss why it is important that members of your family make sure their voices are heard.

Choose one or more of the following activity ideas.

Give each person paper and markers or crayons. Have them make a paper hat and flag. Have a family parade.

Gather neighbors or friends and have a neighborhood parade. Decorate bikes, strollers, wagons, and wheelbarrows with crepe paper, balloons, and streamers. Wear hats and have some traditional patriotic music accompany you as you march up and down the street.

Lie on blankets outside as a family and look up at the stars in the sky. Have each person express a wish for the country and for the family as they "wish upon a star."