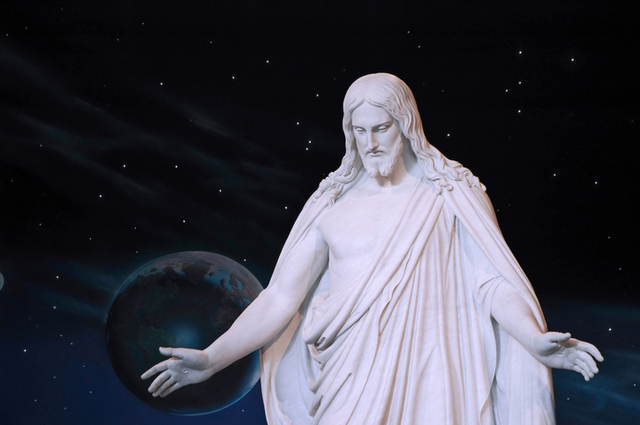 For more information on this topic read "Gaining a Testimony of God the Father; His Son, Jesus Christ; and the Holy Ghost," by Robert D. Hales, Ensign, May 2008, 29-32.

I testify that our Savior lives. He is the Only Begotten of the Father, and He will come again on this earth to reign. . . . He is the literal Son of God, who rose from the dead on the third day, bringing the reality of resurrection to all who will come to earth (Robert D. Hales, "Gaining a Testimony of God the Father; His Son, Jesus Christ; and the Holy Ghost," Ensign, May 2008, 29-32).

Behold my Beloved Son, in whom I am well pleased, in whom I have glorified my name--hear ye him (3 Nephi 11:7).

Turn off the lights in your home. Focus a spotlight or flashlight on a figurine or picture of the Savior. Have the father read 3 Nephi 11:5-7. Ask family members to ponder what it might have felt like to be there. Ask:

Invite the parents in your family to share what pleases them about each of their children. Ask each family member to read 3 Nephi 11:8 silently as they think of Jesus. Have them write in their journals their feelings toward and their testimony of the Savior (Dennis H. Leavitt and Richard O. Christensen, Scripture Study for Latter-day Saint Families: The Book of Mormon, [Salt Lake City: Deseret Book, 2004], p. 72).

One evening while I was visiting Grandpa Snow in his room in the Salt Lake Temple, I remained until the doorkeepers had gone and the night-watchmen had not yet come in, so grandpa said he would take me to the main front entrance and let me out that way. He got his bunch of keys from his dresser.

After we left his room, and while we were still in the large corridor leading into the celestial room, I was walking several steps ahead of grandpa when he stopped and said: "Wait a moment, Allie, I want to tell you something. It was right here that the Lord Jesus Christ appeared to me at the time of the death of President Woodruff. He instructed me to go right ahead and reorganize the First Presidency of the Church at once and not wait as had been done after the death of the previous presidents, and that I was to succeed President Woodruff." Then grandpa came a step nearer and held out his left hand and said: "He stood right here, about three feet above the floor. It looked as though he stood on a plate of solid gold."

Grandpa told me what a glorious personage the Savior is and described his hands, feet, countenance and beautiful white robes, all of which were of such a glory of whiteness and brightness that he could hardly gaze upon him. Then he came another step nearer and put his right hand on my head and said: "Now granddaughter, I want you to remember that this is the testimony of your grandfather, that he told you with his own lips that he actually saw the Savior, here in the temple, and talked with him face to face" (Leon R. Hartshorn, Classic Stories from the Lives of Our Prophets, [Salt Lake City, Deseret Book, 1971]).

Divide the family into pairs, with older and younger members paired together. Give each pair a pencil and a piece of paper. Explain to them that their job is to guess the answers given by teenagers to the following question: Name something associated with the birth of Jesus.

Have each team number their paper from 1 to 6 and try to guess and write down the answers the team members think were given by the teenagers. The answer they feel was given by the largest number of teenagers should be first, and so on—for example, the answer given by the fewest teenagers would be the answer number 6.

Read out the correct responses, and have each team correct its paper. A team receives ten points for a correct response written in the correct place. For example, a team would receive ten points if their number 1 answer matches the number 1 answer below. Teams receive five points for each response that matches a response given by the teenagers but is listed in a different order. These are the six most common responses given by teenagers.