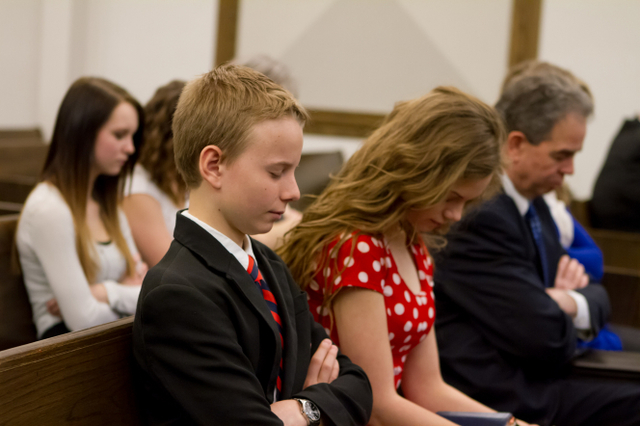 Procedure: Place a piece of thread on the front of your shirt prior to your lesson. It should be a color that will easily stand out on your clothing. Begin by having a brief discussion on reverence. Use the following questions to assist: In what ways can we show reverence? How does a reverent/irreverent atmosphere affect us? At an appropriate point, stop and ask if anyone noticed the thread. Find out if it bothered them. You will find a good portion of the class will have been so distracted by the thread that they paid little attention to your lesson. Help them understand that if something as little as a thread can distract us, how much more distracting is talking, tapping our foot, or any other form of inappropriate behavior or appearance? Our lack of reverence can distract ourselves and others from feeling the spirit (Beth Lefgren and Jennifer Jackson, Building Blocks for Better Lessons, [Salt Lake City: Bookcraft, 1998], p. 56).

Stories: When I first joined the Church, there was a man in our congregation who began each of his prayers with dignified praise. He did it by beginning all of his prayers with the first two phrases of the Lord's prayer, "Our Father which art in heaven, hallowed be thy name." He would then pause for a moment, and in the silence of that pause, I invariably felt a deep sense of reverence. His prayers then proceeded in the usual fashion, giving thanks and asking for blessings. Using the first two lines of the Lord's prayer or something similar such as "Dear Heavenly Father, praise be unto thee" to begin our prayers brings an immediate sense of just who we are addressing and puts us in a worshipful and receptive frame of mind for the rest of the prayer (Joan B. MacDonald, Holiness of Everyday Life, [Salt Lake City: Deseret Book, 19958], p. 131.).  [My father] knew the name of every tree, shrub, and wildflower—not just the common name but the Latin name and the botanical family. When we traveled as a family, he kept a record of any trees or plants he did not recognize, and when he got home (if he could not learn the answer by asking people on the way) he researched until he identified each one. On every drive, at least once, my father would talk about the land. "Have you ever seen anything more beautiful?" he would ask. He would stop the car and wave his hand at the vista as though it were a great pageant and he was the impresario. A brilliant sunset would bring him to silence. The car would roll to a halt, and my father would gaze at the dying sun staining the air with the colors or peonies and hollyhocks and nightshade—and he would stand transfixed by the beauty. He savored such moments as he would a symphony, and his reverence of that glory was transmitted to his children (Jaroldeen Edwards, Celebration! Ten Principles of More Joyous Living, [Salt Lake City: Deseret Book, 1995], p. 122-23.).

Activity: Give each person a piece of paper and pencil and at the given signal jots down five items which are found in the home that reminds him of peace. Everyone then takes turns explaining why each item listed reminds him of peace. Help family members understand that feeling of peace is a reverent feeling (Alma Heaton, The LDS Game Book, [Salt Lake City: Bookcraft, 1968], p. 58).