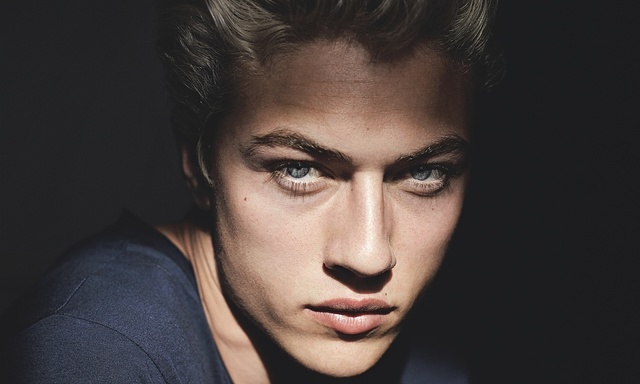 From bizarrely dressed bloggers to Botoxed editors, there’s no place for people-watching quite like the entrance to a fashion show. But the models who walk in the shows are usually pretty anonymous: they slink from one job to the next with their backpacks on, unnoticed.

At last month’s menswear shows, something changed. Outside Versace in Milan, 50 girls in denim cut-offs lined the narrow streets. At Bottega Veneta, a cluster of teens stood by the entrance, craning their necks. At Etro, the excitement peaked as more than 200 teenagers colonised the road, brandishing iPhones and shouting: “Lucky!”

The object of the girls’ affection is Lucky Blue Smith, a 6ft 3in American with blond Mr Whippy hair and unreal, swimming pool blue eyes. On Instagram (@luckybsmith) he comes across as the fantasy boyfriend, clowning with friends, cuddling puppies, peering sleepy-eyed from crisp white bed sheets. At 17, Smith has 1.2 million followers, which doesn’t put him in the same league as social media giants like Kim Kardashian (37.6m followers) or Justin Bieber (31.6m) – but still, it’s a coup for an emerging male model. (The world’s highest-earning male models, Sean O’Pry and David Gandy, have 389,000 and 358,000 Instagram followers respectively.)

It helps that Smith is happy to spend hours with his self-styled Lucky Charms, signing autographs and giving them hugs. Often, the fans get together on Twitter to work out where he will be. Nina, 16, has tracked him down to the Balmain show in Paris. “I like him because he is beautiful,” she explains. “He’s always on Instagram, so he connects with his fans. I prefer models to pop stars. I don’t really like the music.” Gabrielle Benhemon, 14, has met Smith before and shares her trophy: a smiling selfie he took with her iPhone. Later, on the phone from Los Angeles, his American agent Mimi Yapor explains the strategy: “He’s doing things the old-school way, like Elvis Presley. He wants to be a lot more accessible than the typical Hollywood star. His fans have given him this success, so he is kind of giving back.”