Tucked away in a less-traveled area of Canyonlands National Park, there's an arch few people have seen since it was discovered six decades ago.

An 80-pound plaque fixed to the sandstone near the arch's base reads: "No. 131, The George Albert Smith Arch. To This Great Leader, Scouter, Friend of Youth, and President of The Church of Jesus Christ of Latter-day Saints. This Arch is Affectionately Dedicated April 6, 1957. Utah Pioneer Trails and Landmarks Association."

Erik Wright has known about the George Albert Smith Arch for most of his life.

Growing up, Wright often thumbed through a small spiral-bound book in the family cedar chest featuring black-and-white photos of a 1958 trip his father took with other Boy Scouts to the hidden arch. With their green uniforms and yellow scarves, the adventure in the southern Utah landscape was reminiscent of the opening scenes of 1989 film, Indiana Jones and the Last Crusade.

"I'd see this really cool trip these Scouts went on," Wright said. "I always thought there was a George Albert Smith Arch."

The problem today is nobody seems to know the arch named after the eighth president of the church even exists.

After some diligent searching, Wright and other family members helped his 75-year-old father, Steve Wright, fulfill a lifelong goal to return to the arch for the first time in more than 60 years last September.

Now father and son Wright want people to know about the arch, generate support for it to keep its name, and remember those who found it. They also hope to connect with some of the original Scouts who trekked to the arch in the late 1950s.

"This has been a part of our family forever," Steve Wright said. "I think it deserves to keep the name and be recognized as being there."

The story begins around January 1957 when Harlan Bement, then the Utah State director of aeronautics, was flying over the area and spotted the arch while charting emergency landing strips, according to a March 1957 Church News article. 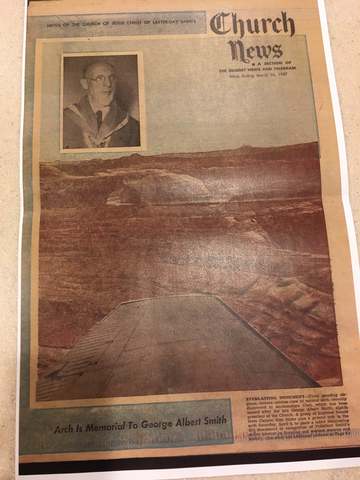 A few months later, Bement and others — including President Joseph Fielding Smith, then president of the Quorum of the Twelve Apostles — flew over the arch for an "aerial inspection." Afterward, President Smith announced the arch had been named after the late church president, George Albert Smith, in honor of his contributions to Scouting, the article said.

In April of that same year, a group of 16 Explorer Scouts from the Canyon Rim Latter-day Saint Stake and others trekked in and placed the plaque, which is still there today.

The following year, another expedition, including Steve Wright and Boys' Life writer named Tom MacPherson, hiked to the arch. A third group followed in 1959. Each of these trips was documented with photos as well as newspaper and magazine articles.

When the Wrights prepared to return to the arch last year, they had to do their homework. There were no GPS coordinates or a trail to the arch, and nobody they asked seemed to be aware of it. Somehow, the Wrights found it anyway.

"We had a good guess of its location by using Google maps, pictures, descriptions of the location in a 1958 Boys' Life magazine, and the second expedition log that my father has had in his possession for the last 60 years," Erik Wright said. "From the Peekaboo Campground, it's about a mile and a half to the base of the arch, a relatively easy hike."

But if you want to climb up to the arch, it's much more difficult. The Wrights recommend you bring climbing equipment.

Rediscovering the George Albert Smith Arch, which they say spans 131 feet in height and 112 feet in width, was well worth it, the Wrights said.

"It's a beautiful and significant arch. You could probably fit three Delicate Arches (in Arches National Park) inside it," Erik Wright said. "Upon finding this arch, we were amazed that the original plaque was still there but even more astonished by the beauty of this arch. And yet no one seems to know about it." 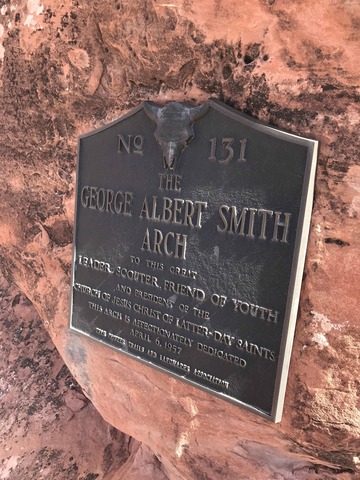 Peekay Briggs, an archivist at Canyonlands National Park, said the park has known about the arch since at least 1975. Canyonlands, including the Needles area where the arch is located, was established in 1964.

"We have documentation, photographs, and maps of where the arch is," Briggs said. "The park has known about the arch and plaque for a while."

Since their trip to the arch, Erik Wright has been in contact with the Utah Division of State History, the state historian and editor of Utah Historical Quarterly, the Sons of Utah Pioneers, the U.S. Geological Society's National Naming Board, and the Natural Arch and Bridges Society in an effort to bring attention and official recognition to the George Albert Smith Arch.

Erik Wright has submitted an online petition to the national naming board and is waiting for the process to run its course. In the meantime, he hopes generating some public interest will help the cause, he said.

L. Stewart Radmall is the director of monuments for the Sons of Utah Pioneers and responsible for markers created by the Utah Pioneer Trails and Landmark Association. Until Erik Wright came along, information about marker No. 131 was limited. Not only was the location unclear, the number was duplicated with another plaque in Iowa, Radmall said.

Now that they know the location, they want to learn more, he said.

"Our thinking about this arch is that we would like to know more about it," Radmall said. "We would like to have current pictures of the plaque so we could determine its condition, pictures of the arch, and detailed directions for finding it by someone interested enough to make the journey. It would be interesting to know the story of the people who caused it to be so designated."

The Wrights have talked about returning to the arch in September. Scouts who hiked to the arch in the late 1950s are welcome to reach out to Steve Wright via email navyjag75@gmail.com.

"Of course, age makes a trip like this very difficult," Steve Wright said. "We would like to somehow get the word out to hopefully let more of those original Scouts know about this."

Mormon Life AdventureAdventure,Mormon Life
Comments and feedback can be sent to feedback@ldsliving.com