4 Ways to Become a Better Father (from the Life of David O. McKay)

Speaking of the importance of one-on-one relationships in the family, Dr. Stephen R. Covey pointed out that “these one-on-ones are where most of the real work of the family is done. This is where there is the deepest nurturing of heart and soul. This is where the most significant sharing, the most profound teaching, the deepest bonding takes place” (Covey, Seven Habits of Highly Effective Families, 152). David learned from his educational career that a parent must have a relationship with his or her children if he or she wants to teach or influence them. The future prophet also understood how important it is to have a significant relationship with each child individually. Often, these bonds were revealed through many of the letters that David wrote to his children, especially as they left for college, went on missions, and got married.

For example, in a letter he wrote to Emma Ray regarding their daughter Lou Jean’s upcoming marriage, he related: “I have just finished a letter to Lou Jean. Tears began to blur my eyes, so I had to bring it to an abrupt close. As I began writing, the full realization of the fact that the first one of our darlings to leave us to make a home for herself flooded my soul to overflowing—I confess that this first break in our lovely, charming family group, gives me a feeling in my heart akin to a pang” (22 November 1927, David O. McKay Family Papers, 1897–1954, MS 21606, box 1, folder 1, CHL).

In another letter from Tucson, Arizona, in 1925, David wrote to Emma Ray, “Thus far, at least we have had no reason to be ashamed of any of our Treasures. From David L. to ‘Bobbie,’ they are all Jewels of the finest grade. Thanks to their perfect little Mother!” (20 May 1925, David O. McKay Family Papers, 1897–1954, MS 21606, box 1, folder 1, CHL). He highlighted the word “treasures” in the letter—a term of endearment from a father who deeply loved his children.

On a trip to southern Arizona, David advised Emma Ray, “Keep the boys busy, and in your company as much as possible, especially Lawrence. He needs more of our companionship. I wish he were with me on this trip. He would enjoy it and profit by it, and I should not be so lonesome” (8 December 1910, David O. McKay Family Papers, 1897–1954, MS 21606, box 1, folder 1, CHL). Indeed, David was connected to his children emotionally, and it pained his heart to be gone from them as often as he was . . . .

It is not enough, however, for successful fathers to be simply emotionally linked to their children. They must also be spiritually connected. Strong fathers can bond with their families through family rituals and practices such as family prayer, family scripture study, father-child interviews, and worshipping together. Furthermore, the Holy Ghost can teach men what their children need and when they need it. Lawrence shared the following experience to illustrate this point:

"[My father] may have saved a life by his sensitivity to the Spirit on another occasion. I was hauling a load of beet pulp from west Ogden over the viaduct when Father, who was having a rare moment’s leisure to read at home, suddenly closed the book and stood up.

'Where are you going?' Mother called as he hurried down the hall.

'To save Lawrence’s life,' he called back over his shoulder.

He got into his automobile and met me at the top of the viaduct, just as I was about to start the descent. He reminded me that I was driving a team of four horses abreast (I didn’t need a reminder of that!), that they were pulling four tons of beet pulp, and that the wagon had no brakes. While I held the reins, he got out of the car to block a wheel by chaining a spoke to the body of the wagon. Unfortunately, we were holding up traffic, and a car honked behind me. I moved the team to get out of the way, but we had started the descent. The team could not stop. By the time we reached the bottom, the horses were racing out of control on the left side of the road. We hit a car that emerged from behind the candy factory, smashing the motor but sparing the driver. One of the horses slipped and fell down. I seized the momentary check to leap down and sit on his head, keeping him from getting up. We were saved.

If Father had not stopped us and if that car had not come out at that moment, we would have careened onto busy Washington Avenue, Ogden’s Main Street, and probably knocked over pedestrians. My feelings of gratitude can only be imagined” (McKay, My Father, David O. McKay, 94).

Strong fathers are not only connected with their children, but they are connected to God. They seek for the Spirit in their lives, and that Spirit will lead them to do well. In this example, David may have saved his son’s life because he followed the promptings of the Spirit. Similarly, a strong father is also the spiritual leader in his home. He does not shy away from that responsibility; instead, he welcomes the opportunity to bless, serve, and lead his family in righteousness.

From the 1973 pamphlet Father, Consider Your Ways, we read:

Fatherhood is leadership, the most important kind of leadership. It has always been so; it always will be so. Father, with the assistance and counsel and encouragement of your eternal companion, you preside in the home. It is not a matter of whether you are most worthy or best qualified, but it is a matter of law and appointment. You preside at the meal table, at family prayer. You preside at family home evening; and as guided by the Spirit of the Lord, you see that your children are taught correct principles. It is your place to give direction relating to all of family life. You give father’s blessings. You take an active part in establishing family rules and discipline. As a leader in your home you plan and sacrifice to achieve the blessing of a unified and happy family. To do all of this requires that you live a family-centered life (“Father, Consider Your Ways,” Ensign, June 2002, 12–15).

David O. McKay was this kind of leader in his home.

Lead image from No Other Success: The Parenting Practices of David O. McKay

No Other Success: The Parenting Practices of David O. McKay by Mark D. Ogletree 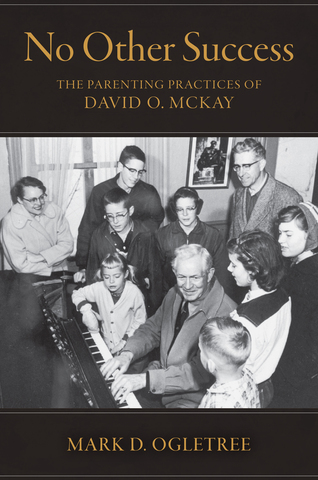 "No other success can compensate for failure in the home" is a statement made famous by President David O. McKay, who taught Church members the importance of focusing on the family. He embraced a new type of fatherhood in which men were more nurturing and involved in their children's lives. He seemed to be ahead of his time in his parenting style and practices. This book takes an unprecedented and in-depth look at President McKay's parenting and family life in his own home and invites readers to learn from his best practices. There are no other books available that take a contemporary parenting theory and apply it backward into history—in this case, taking a closer look at a modern-day prophet who advocated a prominent emphasis on families.
Buy now