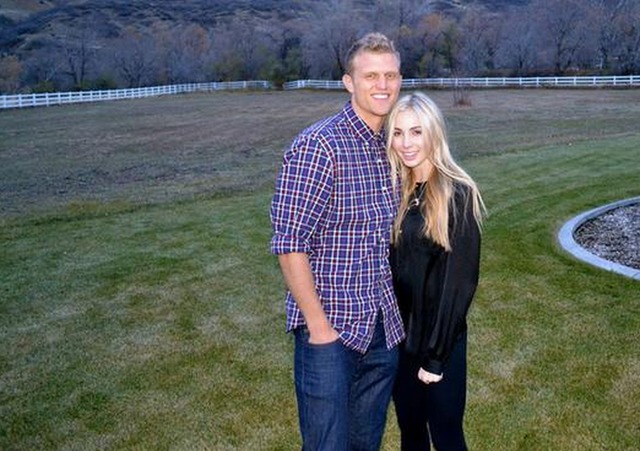 Shea Martinez was not impressed.

One day in February 2014, Martinez and other members of the BYU women’s track and field team were working out in the weight room when a teammate called her over to speak with a basketball player named Kyle Collinsworth.

The 6-foot-6 guard was sporting a mullet hairdo and wearing a cutoff hoodie, shorts and clunky black snow boots. He grinned as he asked her to “rate his outfit.”

“I looked at him and said, ‘Probably a 3,’” Martinez said. “Then I turned around and walked away, thinking, ‘I’m the biggest brat. Why did I say that?'”

But the two would meet again, and somewhere along the way, a friendlier relationship developed. Last month, Martinez and Collinsworth were married in the Salt Lake LDS Temple.

The basketball star and track standout are not the first student-athlete couple to marry at BYU. Some scholarship athletes who are balancing academics and the rigors of college athletics say they often have little time left over for a social life. At BYU, some end up dating and sometimes marrying those they see the most — other student-athletes at the Student Athlete Building.

“The SAB is a little dating community,” Raymond said.