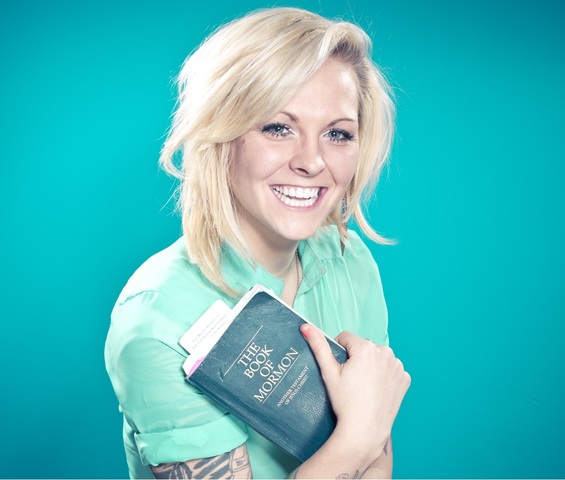 Finding Joy in the Gospel: Converts Share Their Stories

Al Fox wasn’t looking for religion. In fact, when the missionaries tracted in to her while she was living in New York, she told them she would let them teach her only if they brought her a steak dinner, sure they wouldn’t follow through and she wouldn’t have to see them again.

But Fox didn’t mind too much, because there was “something about them that I wanted them to come back. I didn’t know why, but I just loved how I felt around them,” she says. That didn’t mean she wanted to hear about the gospel, though. “Every day I saw them, I did everything I could to do anything except talk about the Church, and I thought I was doing fairly well.”

But gradually, she began to open up little by little, and she started reading the scriptures and praying—hoping more to prove the Church was wrong than it was right—but the change in her heart became greater.

Early one morning she awoke and couldn’t go back to sleep, and she didn’t know why. At four a.m., she decided to call the elders who were teaching her, not knowing what to say and not even thinking they would answer. When they did, she shouted, “I want to get baptized!” She was so shocked by her sudden admission that she immediately hung up the phone. They called her back, and despite her many fears and lack of knowledge, Fox decided to move forward. “I knew that when I said it, I felt it, and that was what I needed to do.”

So Fox got baptized, about a month after she first started meeting with the missionaries. “I was just filled with this excitement and this happiness that I couldn’t even put into words . . . and I wanted to yell to all of New York that happiness is real, that it exists, and that they can have it. I was so excited that I told everyone. I made a promise that how I felt that day when I got confirmed and I got baptized, I didn’t want it to ever go away, because I recognize that it only came from the gospel, and I am going to do everything I can to keep that with me.”

After joining the Church, though, Fox lost every friend she had and was even forced to choose between the Church and her family. But because of her tattoos, she had a hard time trying to fit in with the LDS community and making friends there. Despite her loneliness, though, she didn’t lose hope. “What it came down to was that knowledge and that feeling that I had when I got baptized, recognizing that that happiness can always be there if you turn to the gospel.”

Soon she found her own way to share that happiness she had found in the gospel—writing blog posts and making videos online to share her story and inspirational messages of her testimony, which soon spread wider than she had ever expected. She also began traveling all over Utah, giving firesides at least twice a week. Now, her inbox is always full of emails from people around the country—and the world—sharing how they have been touched by her message.

“The happiness that I have is real. It’s real, and I recognize that everyone doesn’t have and feel this. And I want everyone to know that they can,” she explains. “Happiness is the gospel—it comes from there and it’s real, and I’m grateful for that.”

At age 22, Mariama Kallon was hearing rumors of something dark in her country. “There are rebels,” the villagers in Sierra Leone would cry as they fled from their homes toward the cities. And as they carried their bundles of belongings, they also cried for what they left behind: “My daughter is killed; my child is killed; my family is killed.”

For years, Kallon lived in constant fear of the rebels without ever coming into contact with them, fleeing from one place to the next to avoid them. When she once again heard that the rebels were working their way toward where she was living, Kallon decided to go somewhere completely out of the way—her hometown. She hadn’t seen her parents in years. “I thought it would be safe for me. I didn’t know the Lord was taking me there to see—to know what happened to them.”

After arriving, she and her sister were trying to find food to cook for the family that day when they heard the alarm again: “The rebels are coming!” They didn’t have time to go back for their parents, but they heard the screams, the gunshots, the crying. They knew they would never see their parents again.

Kallon and her sister escaped with a group of other women but had to travel for several days and nights to get to the larger cities where they could be safe. One morning, they awoke surrounded by the rebels. “That very moment was the time in my life that I gave up,” Kallon says. The men lined the women up, raped them, then began chopping off their limbs.

Kallon watched as they chopped off her sister’s legs, and she knew she would be next. But she had this feeling in her heart: “‘Talk to Him. It’s not done yet; He’s not done with you.’ . . . and I said this little prayer in my heart. I said, ‘God, I know You are there. There is something You can do to stop this. You can.’” As soon as she finished her prayer, they began hearing the shouts of their rescuers coming, and immediately the rebels fled. “At that moment I knew: this God has something.”

Kallon went, and found exactly what was promised. “I was happy,” she says. “My heart was open.” Learning the doctrine of eternal families was the greatest thing she gained. Even though she was the only one of her family left living, she found hope in the truth she had been taught. “The greater joy is knowing through this gospel that I will see them again.”

After Kallon had been a member for about a year, she decided she wanted to serve a mission to be able to share all the things she had learned with others, and she was called to serve in the Salt Lake City Temple Square mission. She has lived in Utah ever since, sharing the hope and courage she found in the gospel with others.

“There are still hard times, there are still things I struggle with, but the thing that keeps me going, the thing that I’m holding onto most, is that hope that I have in my Heavenly Father and His son, my Savior. I know that as I turn to them, they are always there for me because they’ve always been there, and . . . they will always be there.”

No pastor, priest, or minister chooses his or her vocation,” says Roger Keller. “It chooses them, and this was my experience.”

Keller has spent his life trying to do exactly what God told him to do. At a young age, it became clear to him that no matter which direction he turned—whether it was the sciences or music or elsewhere—the Lord had something else in mind for him.

Having had spiritual experiences early in his life as a member of the Presbyterian Church, Keller continued to follow those experiences
wherever he could. So it made perfect sense that he would be attracted to the LDS Church when he was first introduced to it at age 21.

“I found Christian people who were living out their faith, taking care of each other, and all serving through their callings,” he says. “This was not a ‘sit in the pew church.’” Impressed, he joined the Church, but he continued to seek ways to serve the Lord as much as possible and in whatever capacity possible. When he didn’t receive a calling in the LDS Church, he went elsewhere and from then on continued to serve in other religious capacities among the Methodists and Presbyterians.

“I served Jesus and brought people to Him through the preaching ministry, the teaching ministry, the pastoral ministry, youth ministry, music ministry, and the sacraments [ordinances] of the churches in which I served,” Keller says. “Teaching world religions taught me that the Lord Jesus was active with all of God’s children, no matter what their faith traditions might be. Our Heavenly Father knows each of His children so well that He knows where they need to be to grow the most. He gives us all scriptures to be followed [2 Nephi 29:11-12], and if we follow the paths He has given us, they will lead to Him finally through the fullness of the gospel.”

Eventually, though, Keller’s work brought him back in contact with Mormons. Years later, while serving as the senior pastor of the First Presbyterian Church of Mesa, Arizona, Keller was continuing his work on interfaith understanding by writing a book to explain Latter-day Saint thought to those who were not LDS. The project took him to BYU for a week, and while driving back to Arizona, “I had a powerful spiritual experience,” Keller says. “The essence of it being, ‘You found it [the LDS Church] twenty years ago; what are you going to do with it this time around?’”

Keller didn’t know the answer then, but he and his wife tried to both individually understand what would be best for their family. “With each of us searching for where the Lord wanted us next, we arrived at the conclusion on the same day in 1986 that He wanted us in The Church of Jesus Christ of Latter-day Saints. . . . It is to this fullness that all religions ultimately lead, because God is active in all of them. We are Latter-day Saints because we have continued to follow the divine call of the Lord Jesus. This is where He has led us, and we can imagine being nowhere else.”

Read the rest of the article and the stories of two other converts in the March/April issue of LDS Living, available for sale.