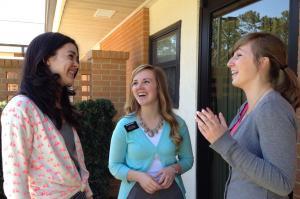 Six months ago, three 19-year-old women all had the same realization at the same moment, in different parts of the country.

Last October, the Church of Jesus Christ of Latter-day Saints announced in a worldwide broadcast that the age for becoming a missionary was going to change. Traditionally, Mormon men leave for two-year missions at 19, and women can serve for 18 months at age 21. That age is now 18 and 19, respectively. As it has always been for church members, a mission is seen as an obligation for men but an option for women. As a result of the age change, the number of missionaries worldwide has grown from 58,000 a year ago to about 85,000 now. The number of Mormon missionaries assigned to Flagler County has increased from two to four for the first time since 1990, thanks to more women deciding to serve.

Read the rest of this story at www.palmcoastobserver.com