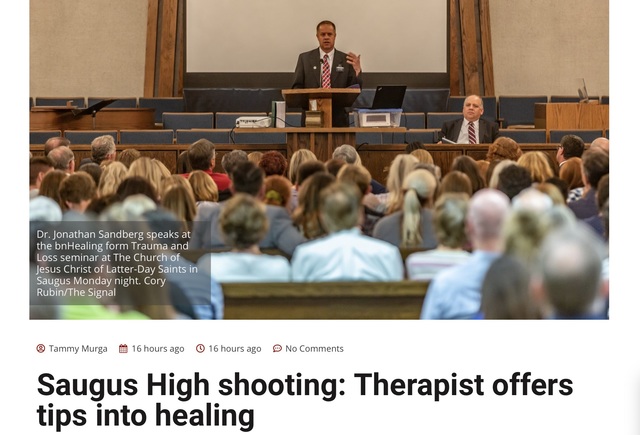 Dr. Jonathan Sandberg, a therapist and member of The Church of Jesus Christ of Latter-day Saints, offered some counsel of healing to those affected by the unfortunate shooting that took place at Saugus High School in Santa Clarita, Calif. on Monday, emphasizing that it is possible to move on from such tragic events. The Santa Clarita Valley Signal reported on the meeting.

Sandberg, who has worked as the marriage and family therapy program director at the universities of Syracuse and Brigham Young during his career, has had many opportunities to give advice and tips on how to overcome challenges to many people dealing with a wide variety of experiences. Although a tragic shooting is an entirely different animal to tackle, Sandberg is adamant that hope is at the end of the tunnel-regardless of the situation.

Just a week after the shooting, Sandberg incorporated gospel principles as he spoke to more than 150 individuals at a church meetinghouse in Santa Clarita, Calif., some of whom were local students directly affected by the shooting that left three of their classmates dead while injuring three others.

Among other advice that was given by the Latter-day Saint therapist, Sandberg offered three ways on how people can heal during this tragic time in their lives. The three steps included relying on each other, seeking help, and connecting with your higher power.

One of the main themes that correlated with the three insights is human connection and interaction. When bad things happen, Sandberg noted that we need real communication because we can't do it on our own.

You can read the full article and see more quotes from Dr. Sandberg in his address here.

Mormon Life Shooting TherapistShooting,Therapist,Mormon Life
Comments and feedback can be sent to feedback@ldsliving.com