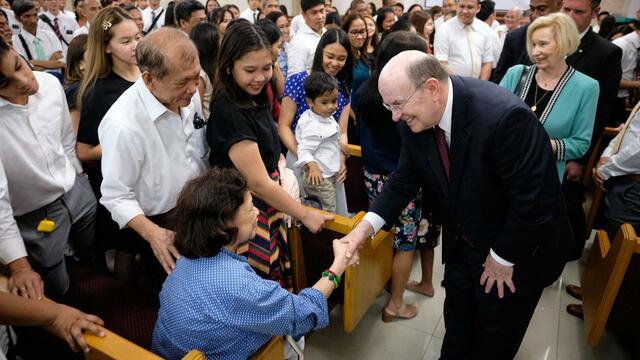 For the first time in 43 years, the Taal Volcano in the Philippines has erupted, sending ash, steam, and rocks nine miles into the sky.

Elder Quentin L. Cook of the Quorum of Twelve Apostles, who is in the Philippines with his wife, Mary, on a ministry and outreach visit, met on Monday with interfaith leaders and discussed the effects of the eruption.

“We’re concerned about everybody that’s affected and we hope that we can contribute to anything that’s necessary to bless all faiths,” Elder Cook said, according to Church Newsroom Philippines. “They have our prayers and our faith.”

The volcano is located 35 miles south of Manila, Philippines. Meetinghouses of The Church of Jesus Christ of Latter-day Saints in Lipa, Tanauan, Balayan, and Agoncillio are being used to shelter members and friends as a precautionary measure, according to Deseret News.

Missionaries have been reported safe and have been relocated to safe areas or instructed to remain in their homes.

Elder Cook was originally scheduled to participate in a donation event from the Church’s Light the World humanitarian campaign, but the event has been postponed in view of the emergency.

At a devotional on Sunday night prior to the escalation of the volcano’s threat, Elder Cook praised the members for the faith they show during times of hardship.

“I know that there are a lot of trials and hardships. The Filipinos have always faced those in such a glorious way,” Elder Cook said, according to Church Newsroom Philippines. “I was here not too long after Mount Pinatubo [1991] had blown up and almost a million people had to leave their homes. But there is something about Filipinos that even when bad things happen, they rally, and they lift their spirits, and they smile, and they go forward.”

READ THE REST OF THE STORY AT DESERET NEWS