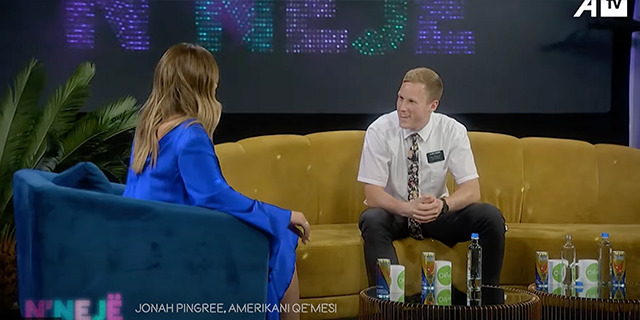 For the second time in less than a month, an American missionary appeared on local television in eastern Europe—this time in Kosovo—and spoke fluently in the country’s native language, resulting in an amazing and life-changing experience for him and smiles and gratitude from the country’s native residents.

► You may also like: 2 missionaries appeared on TV in the country Georgia—now they have more people interested in the gospel than they can keep up with

Elder Jonah Pingree, a native of Utah, dressed in a familiar white shirt, tie, and missionary name badge for his appearance on ATV, a television station in Kosovo. He spoke for nearly 15 minutes in Albanian with the show’s host about his experiences as an American living in Kosovo, the challenges of learning the Albanian language, and some of his favorite local food dishes.

Elder Pingree’s companion, Elder Lindis Marra, is a native Albanian and watched the interview from off-camera. “Elder Pingree’s interview was excellent,” Adriatic South Mission President Paul Burdon told Church News. “He represented the Church very well and spoke fluently in Albanian. His friendly and happy personality came across well. I am sure that viewers could not help being impressed by him and that this will have reflected favorably on the Church.”

As of the time of this article’s publication, the video has over 25,000 views on YouTube. Many of the comments are very complimentary of Elder Pingree’s language skills, willingness to sacrifice for two years for his church, and service to the people of Kosovo. Elder Pingree also told Church News, “I hope it also helps people understand what missionaries do and learn more about the Church.”