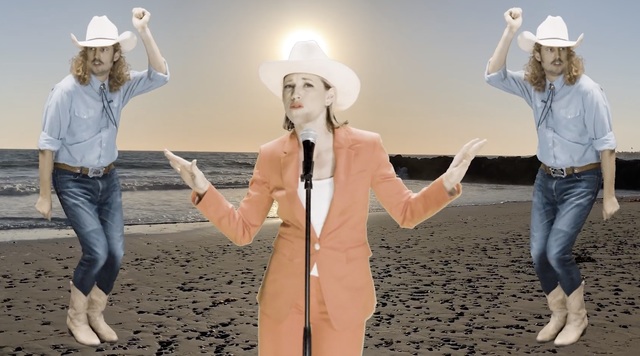 Brooke White is best known for her appearance on American Idol season 7. Jon Heder is best known for his starring role in Napolean Dynamite. But what do the two have in common? They’re both members of The Church of Jesus Christ of Latter-day Saints. And now they’re also sharing the stage in the same comical music video, with Heder acting as every member of White’s band, including a cowbell player.

Throughout the video, written for White’s song “Back Pocket,” Heder sports a mullet and showcases some Napoleon-esque dance moves in front of a green screen—something White wanted to do to pay homage to Shania Twain’s “Man! I Feel Like A Woman” video.

"I started thinking about who could do it,” White told Billboard. “In my mind, it would be awesome to have Jack Black or someone like that. Then I saw a little clip of Napoleon Dynamite and was like, 'Omigosh, Jon Heder! He'd be perfect!'"

Read more about how the video came to be on Billboard.