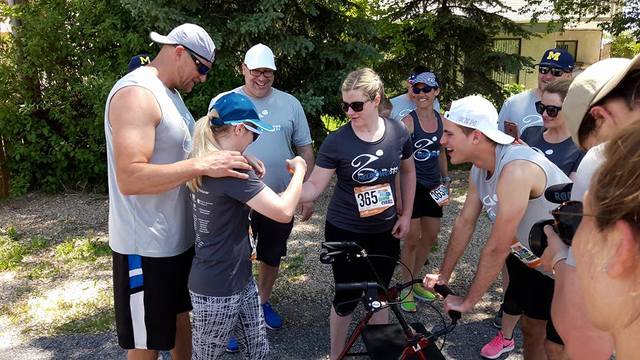 On Sept. 5, 2014, Kendal Levine was parked 15 feet off of the side of the road on her mission in Canberra, Australia, to take a picture of a double rainbow when she was hit by a 4,000-pound car traveling 40 mph.

According to Kendal's GoFundMe page, the driver had fallen asleep at the wheel, and she was thrown about 30 feet on impact before the car drove over her, trapping Kendal.

The quick-thinking of bystander Brendan Fearn probably helped save her life, as he ran into his nearby house to grab a car jack and roll Levine out from under the car, according to brisbanetimes.com.

Though Levine didn't suffer any broken bones or damage to internal organs, she was placed in a medically induced coma for three weeks and lost 100 percent of her muscle tone, according to KSL.

"The neurologist told us all she would ever be is a girl in bed. He never expected her to get any better,” Kendal’s mother, Melody Levine, told KSL.

But on Saturday, Kendal proved doctors and skeptics wrong by walking one mile in the Ragnar Relay Series.

With the aid of a walker, her therapist, and a few supporters, Kendal completed her portion in the race, a miraculous feat considering a little less than three years ago, no one was certain she would be able to move by herself.

"Kendal did it!" Kendal's mother wrote on Facebook. "It hurt, she's exhausted. Her therapist, Matt Hansen, was awesome as well as her entourage of supporters. Mission accomplished!"

After doctors told the Levines their daughter would not be able to do so much as leave her bed, they were able to move her to the University of Utah Hospital where they entered her in a rehabilitation program.

From there, Kendal progressed until her inspiring race this weekend, keeping her missionary spirit the entire time.

"Through this trial, I've been able share my story and help people out," Kendal told KUTV, "and that's what missionaries do."