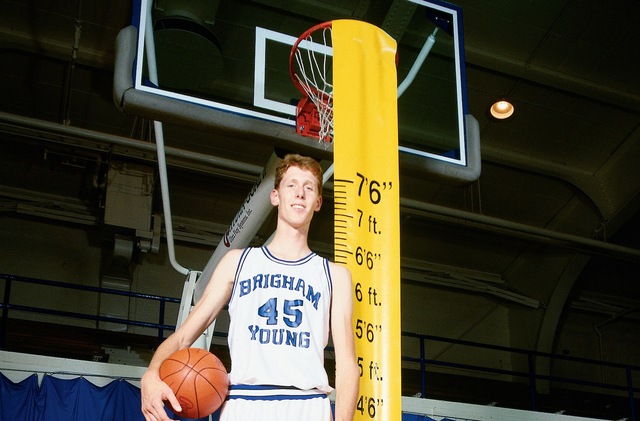 A statement released Wednesday through the NBA’s Dallas Mavericks made public news of an accident that took place on January 20th in St. George, Utah, that left former BYU and NBA basketball player Shawn Bradley paralyzed. The statement, issued by the Mavericks as a result of Bradley’s spending the majority of his career playing for Dallas, says that the 7-foot-6 Bradley was riding his bicycle just a block away from his home when he was struck from behind by a car.

“The accident caused a traumatic spinal cord injury that left him paralyzed,” the statement reads. “After undergoing neck fusion surgery, Bradley has spent the last eight weeks hospitalized and undergoing rehabilitation. . . . His very strong sense of faith is being tested as he participates in grueling physical therapy and learns how to cope with the challenges of paraplegia.”

According to the statement, Bradley is in good spirits and hopes to use his experience to “bring greater public awareness to the importance of bicycle safety.”

Bradley, who famously referenced his full-time Latter-day Saint mission to Australia in the film Space Jam, played in the NBA for 12 seasons. Doctors say that “his road to recovery will be both long and arduous, perhaps an even more difficult physical challenge than playing professional basketball.”

The Dallas Mavericks have issued a press release on behalf of former Maverick Shawn Bradley as well as statements from Mark Cuban and Donnie Nelson. pic.twitter.com/F9fCtlZ1zJ— Mavs PR (@MavsPR) March 17, 2021