Graeme Purcell made his first big splash on stage at 12 years old—when he landed a role in the professional musical production Oliver. At that young age, he performed all over Australia as Dipper, an orphan boy, and "one of Fagin's gang," according to macarthuradvertiser.com.au.

Purcell's life continued to gravitate toward the spotlight as he went on to perform on "So You Think You Can Dance Australia," where he made it into the top six.  "Growing up, I've always been a singer more than a dancer," Purcell said on the show. "I actually only took up dancing to improve my performance skills, but I guess I am a dancer now."

Despite the interruption it would make to his career, Purcell served a mission in Wellington, New Zealand. Upon returning home, Purcell returned once again to the spotlight, this time landing the role of Simba as an understudy in the Australia cast of the Broadway playThe Lion King as it toured around Australia. On nights when he didn't play the lead role, he played several characters and made up part of the chorus.

"It feels like I’m performing the Plan of Salvation," Purcell told Mission Geek. "'The Circle of Life' sends the message to Christians or otherwise that something makes everything grow and continue. I know this is leading people towards God, even if they don’t know it. This is the story of a man being reminded of his calling as king. I picture Mufasa as God, Simba as us, and Rafiki as the Spirit. I love the messages in The Lion King, I know this is where I’m meant to be.” 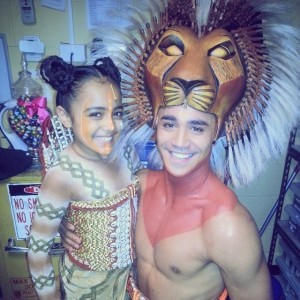 But living the gospel in the entertainment industry hasn't been easy for Purcell. “Fundamentally my industry goes against the culture of Mormonism," he told Mission Geek. "I regularly miss YSA activities, firesides, conventions, even some Sunday meetings. It’s not a nine to five job. It could easily change your commitment to the gospel.”

Because of the challenges that come with performing, Purcell has made it a priority to keep his faith an active part of his life. “I try to attend lunchtime institute, find lessons online, and teach with the missionaries multiple times a week,” he told Mission Geek. He even keeps a picture of the First Presidency in his dressing room to remind him who he is and everything he stands for. Then he shares the advice, "Build a solid foundation, set your standards, go on a mission, be willing to sacrifice, and know you are always on The Lord’s errand."