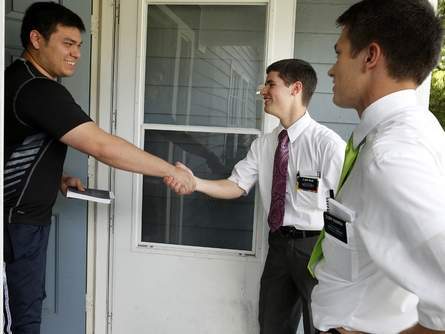 After two knocks and no answer, Elder Paul Goodrich and Elder Cameron Wilde — both clad in white button-downs, dress pants and nametags — stepped off a stranger's doorstep and walked toward the house across the street.

Noticing a woman sitting on a porch nearby, Goodrich and his fellow Mormon missionary headed over to say hello.

When they asked her if she'd heard of the Church of Jesus Christ of Latter-day Saints, she said she had and didn't have any ill will toward Mormons. "It's a neutral thing for me," she told them.

The woman, an Episcopalian with short, dark hair, said she didn't have much time to talk. She was just having a cigarette before heading back inside to her sick husband, who has stage four liver cancer.

The missionaries asked his name. "His name's Jay," she said. "He's a good man."

They offered to pray with her for him.

Read the rest of this story at gainesville.com