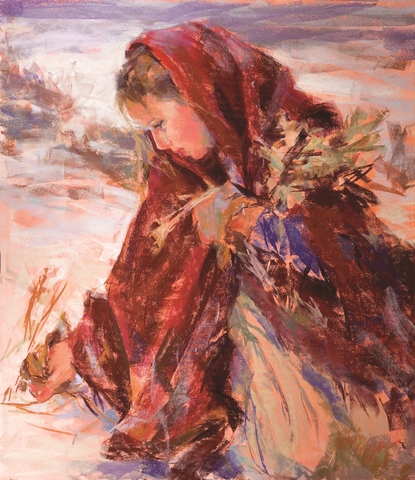 Gallery: Paintings and Stories of the Pioneers

We've all heard stories of faith and heroism from the early Saints as they crossed the plains, but this book takes our understanding of those pioneers to a whole new level, allowing us to get intimately acquainted with several of the individuals and families who traveled with the Willie handcart company through photos, journal excerpts, inspiring stories, and biographical details. Throughout the book, the stories of these faithful are brought to life through the gorgeous and plentiful paintings of Julie Rogers.

Before James G. Willie helped the Saints cross the plains, he first helped others emigrate to the United States, after being released from his mission in England in 1856. Like many missionaries who were returning home, he was asked to assist the converts who were emigrating from Europe so they could gather to Zion. His first assignment came from his mission president, Franklin D. Richards, who appointed him to preside over the 764 Saints who were sailing to America on the Thornton. By the time the ship departed from Liverpool on May 4, 1856, James Willie had been away from his wife and three young children for nearly four years.

James was diligent in caring for the Saints on the ship, who had many needs. “I believe there has never before been a company with so many old and young, halt, blind, and lame, from so many nations, [that] crossed the sea,” wrote Anna Tait of Scotland. The company journal reports that early in the voyage, when many were too seasick to leave their beds, “Presidents Willie and Atwood visited among the sick, administering [comfort].” Archibald McPhail also said that James was “very kind in looking after the Saints that are sick.”

Most of the Saints aboard the Thornton later became members of the Willie handcart company.

Susannah Snow joined the Church at age 18 and was the only member of her family to do so. At age 25, she traveled west—across the sea and across the plains—with the Willie handcart company. Of the trials they experienced, she wrote: “We had to live on short rations and it became very cold and a number of our elderly people died. . . . Traveling as we were with scant clothing and lack of sufficient food, we suffered greatly from the severe cold and snow.”

Susannah recalled that the people bore these sufferings with remarkable faith: “We waded through the cold streams many times, but we murmured not, for our faith in God and our testimony of his work was supreme. And in the blizzards and falling snow we sat under our handcarts and sang, ‘Come, Come, Ye Saints.’”

“During a very cold spell, . . . my mother traveled fifteen miles with little Alex on her back, as he couldn’t walk in the snow” –Betsey Smith, on her mother, Margery Smith

“It hurt me to see my children go hungry. I watched as they cut the loose rawhide from the cart wheels, roasted off the hair, and chewed the hide. There came a time when there seemed to be no food at all. . . . Night was coming and there was no food for the evening meal. I asked God’s help as I always did. I got on my knees, remembering two hard sea biscuits that were still in my trunk. They had been left over from the sea voyage. They were not large and were so hard they couldn’t be broken. Surely that was not enough to feed 8 people, but 5 loaves and 2 fishes were not enough to feed 5,000 people either, but through a miracle, Jesus had done it. So, with God’s help, nothing is impossible.

“I found the biscuits and put them in a dutch oven and covered them with water and asked for God’s blessing. Then I put the lid on the pan and set it on the coals. When I took off the lid a little later, I found the pan filled with food. I kneeled with my family and thanked God for his goodness. That night my family had sufficient food.”

Eleven-year-old Bodil Malene Mortensen used the last bit of strength in her frozen fingers to gather pieces of sagebrush protruding from the ever-deepening drifts of snow. How she must have longed for the warmth that would come by adding her fuel to a campfire. But her life was lost in the struggle. She died that night beside the fire of the she had helped fuel.

Of her, President Gordon B. Hinckley said, “[Bodil] reached her cart with the brush in her arm. There she died. . . . Starvation and bitter cold drained from her emaciated body the life she had fought for. . . . We stand as recipients of their great effort. I hope we are thankful. . . . I can never forget Bodil Mortensen.”

October 19, 1856, the Willie company ran out of flour, but they were also found by the first rescuers from Salt Lake City. These four men rode up to the famished people with the glad news that provision wagons would be coming soon.

Julia Hill writes of the moment one of them saw her sister, Emily: “When [Joseph] saw [Emily’s] pitiful condition, she reported that he burst into tears. He told her that it was because she looked ‘starved.’ He then quietly gave her a small onion from his pocket and told her to eat it. Instead, she saved it. She saw a man lying on the ground near death by a fire. She felt so badly for him that she gave him the onion. He later credited her act of kindness with saving his life.”

On October 23 they crossed Rocky Ridge, traveling nearly 16 miles in a blizzard, and arrived at Rock Creek Hollow late at night. They were cold, damp, and exhausted, but Archibald McPhail still had duties to perform. Besides attending to the welfare of his family, he found that one of the women in his group was missing.

It was a cold, lonely walk as Archibald returned to seek the lost one. He eventually found her freezing, fearful, and without hope. She had reached a creek that she was afraid to cross because the ice might break and she would fall in. She reasoned that she was dying anyway and did not want to die with wet clothing frozen to her body.

Archibald called for her to come across the ice to him, but no amount of coaxing would change her mind. He finally went to her, gathered her up, and started back across the creek. Their combined weight broke the ice. Archibald was soaked in the frigid water, but the rescued woman was safe and dry.

When the Willie handcart company finally arrived, 8-year-old William Willie was so excited to see his father, Captain Willie, that he walked to the mouth of Emigration Canyon to meet him.

Learn more about the faithful Saints of the Willie Handcart company in Follow Me to Zion.