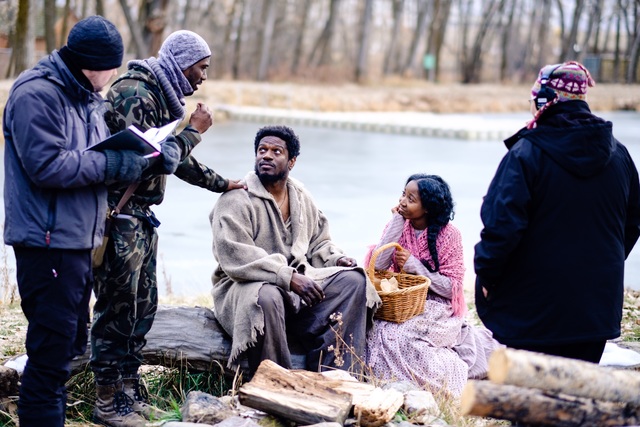 Mauli Bonner sat down on the set of his upcoming film, wrought with emotion. With tears in his eyes, he spoke to his crew.

“To be able to tell these stories,” he said in a video about the project, “it’s just that they deserve it. Everybody. We deserve to know.”

The stories Bonner was referring to were those focusing on black members in the history of The Church of Jesus Christ of Latter-day Saints and, in particular, one pioneer by the name of Green Flake. The film was being created in an effort to commemorate Flake's life. It is his story that Bonner felt compelled to tell the world.

It was in June 2018 when Bonner, alongside many of his family members, was invited to perform a medley of Primary songs at "Be One — A Celebration of the Revelation on the Priesthood" put on by the church. It was during this event that Bonner said he felt a desire to learn more.

“The spirit was so strong at the 'Be One' event,” Bonner said in a phone interview. “It was a spirit I had never had before. Hope, love, friendship — all the positive emotions you could feel were felt there. I was given a desire to know more about black history in the church and to share what I know.”

After that day, Bonner said he began reading everything he could, and came across the story of Flake, a Southern slave who was baptized into the Church along with his masters. Further study led Bonner to learn that Flake was one of Joseph Smith's bodyguards and that Flake was part of the first pioneer company led by Brigham Young in 1847, and also drove the first wagon into Emigration Canyon (see "In My Father’s House Are Many Mansions: Green Flake’s Legacy of Faith," by Jonathan A. Stapley and Amy Thiriot, published Feb. 19, 2014, on history.lds.org, and "Heroes and Heroines: Green Flake — Black Pioneer," by Jane McBride Choate, Liahona, June 1989).

Bonner, who has worked in the music industry for the past 15 years, writing songs and directing vocals for artists like Ariana Grande, Katy Perry, Fergie and Ke$ha, and winning a Grammy Award along the way for his work on Gladys Knight's "Be One" album, put his professional career in Los Angeles on hold as he engulfed himself in the study of Flake.

“Reading quickly became writing,” Bonner said. “This process consumed me. I was so eager to wake up the next morning, and after just one month I had written a screenplay and had songs in the works.”

Bonner said there were several reasons he felt Flake's story needed to be told.

“There are so many of these stories that we don’t know about,” he said. “If they don’t get shared, then they get lost in history. We need to support the lives these people lived. They were pushing through so many physically and spiritually challenging things, and had so many reasons to quit and even leave the church, but they didn’t. And with so many reasons people are finding these days to leave the church, we need these types of pillars to look to as examples.”

Bonner acknowledged that slavery was a dark time in history, and a very difficult time to look at. He said that in avoiding it, however, we don’t get to learn things we need to.

“This time period was dark for so many African Americans, but it is part of history,” Bonner said. “I think it is fair to call something what it is, and this was a terrible time, and slavery was a terrible thing. What I want to do is shine a positive light on the time period in our church’s history. There will be those who are uncomfortable with this story, but I want them to know that this story is not changing history, it is just adding to it. It is part of history that we need to know.”

As an artist who has spent many years catering to the younger generation, Bonner said that it was this generation that was also a driving force in this project. He also recognized that it is a difficult time to keep faith when there is so much out there to detract from it.

“I work in the pop music industry mainly catering to the youth and millennials,” Bonner said. “I know that they are smart, and will go searching for answers wherever they can find them. I don’t want the adversary to use these stories to draw the youth away. The youth need to know that there will be things that they disagree with, but they also need to be prepared to meet those challenges already informed with truth. I want this to be a resource for them to learn more, to gain a stronger testimony of the gospel and to draw closer to Christ.”

With the screenplay finished and many songs near completion, Bonner took the next step, contacting people in the film industry to see if there was any interest. He called Alex Boyé, David Osmond, members of Gentri family and several of his family members including his brother Yahosh Bonner, among others — all of whom were on board. In the film, Boyé plays a slave named Jacob who was sent on the pioneer trek, Osmond plays Porter Rockwell and Yahosh Bonner plays the title role of Green Flake.

“There are people that have lived remarkable lives and have had to endure some hard things so that I could be here,” Yahosh Bonner wrote in a text message. “The stories of people of color like Green Flake need to be told. His contributions to the settlement of Utah and to The Church of Jesus Christ of Latter-day Saints are such that the world should know his name and know that it was his testimony of the gospel of Jesus Christ strengthened him. ... He was a hero that people who look like me can identify with and be uplifted knowing that someone like them overcame so much, gave so much and kept believing through the toughest times in his life. I am truly humbled to represent him in this film.”

Boyé also shared his thoughts on the importance of sharing the story, stating via email, “Alongside the ones we are familiar with, there are so many pioneer stories that are yet to be told. With the Church being recognized more and more as a world church, and not just a Utah, or even an American church, stories like that of Green Flake need to be shared, along with many other cultural stories that can help enhance and add to the fabric of our faith.”

Mauli Bonner and his crew have already finished filming the first half of the movie, and are working toward completing it in the coming months. A Kickstarter campaign has been underway for the past several weeks to help fund the movie. Regardless of the ability to raise funds, however, Bonner said that the film will be made.

“We will complete the film regardless,” Bonner said. “In the beginning, I just had a cast, but somehow the Lord pulled it together, and soon we had a set, costumes and a camera crew. It doesn’t matter to me how big or how small this film is. All that matters is that the story of Green Flake is shared.”

For updated information on the progress of the film, see the“Green Flake Movie” Facebook page at facebook.com/GreenFlakeMovie/.