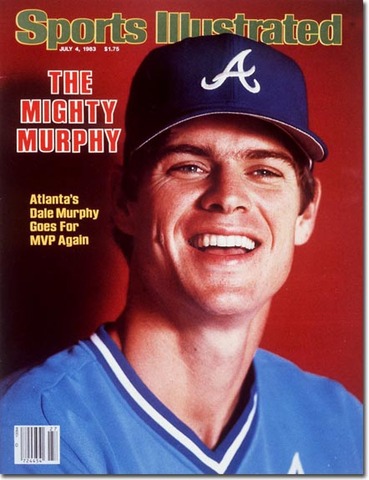 “My brother Taylor and I put together the petition,” said Chad Murphy, Dale Murphy’s oldest son. “My dad isn’t very vocal about himself, so we thought we should say something. It turns out it’s caught on with a lot of folks because this year there are a lot of players on the ballot who used steroids or are suspected of it. And there’s a lot of debate in the sports world about whether people who essentially cheated should be elected.”

Chad wrote a letter to the Hall of Fame voters, who are sports writers belonging to the Baseball Writers Association of America (BBWAA). The letter read in part:

“I’d like to begin by reiterating the voting criteria, as per the Hall of Fame’s website:
5. Voting: Voting shall be based upon the player’s record, playing ability, integrity, sportsmanship, character, and contributions to the team(s) on which the player played.”

Chad explained, “What we’re trying to say is if this criteria is a reason to keep people out, it should also be a reason to let people in. It shouldn’t be a ‘performance at all costs’ mentality. That’s always been my dad’s message.”

“[He] had a reputation for clean living. Had it through his entire career, as straight an arrow as you will come across in professional sports (or any other line of work). Never a whiff of controversy on the field or off. Not before, during or after his playing days. . . . His career began in a baseball era tainted by cocaine scandals and amphetamines in the clubhouse, and ended just before the era tainted by widespread steroid use. But Murphy? His character, his reputation were beyond reproach, and remain so to this day. . . . If integrity and character are seriously taken into consideration when 10-year BBWAA members fill out their ballots for the National Baseball Hall of Fame, then Dale Murphy belongs in the HOF.”

And as sports writer Mike Benzie sums it up, “Dale Murphy still has so many fans rooting for one of the nicest guys in all of sports. He doesn’t need the Hall as much as the Hall needs him.”

• Sports Illustrated’s “Sportsmen of the Year” Award, 1987 (represented baseball as the “Athlete Who Cares the Most,” along with U.S. gold-medalist Judi Brown King, Kenyan gold-medalist Kip Keino, and others)

• Lou Gehrig Award, 1985 (given to the player who most exemplifies the character of Lou Gehrig, both on and off the field)

• Roberto Clemente Man of the Year Award, 1988 (given to the player who “best exemplifies the game of baseball, sportsmanship, community involvement and the individual’s contribution to his team”)

• Inducted into the World Sports Humanitarian Hall of Fame, 1995 (induction class with Roberto Clemente and Julius Erving. One of only 8 baseball players inducted in the Hall’s history)

• Inducted into the Georgia Sports Hall of Fame, 1997

• Inducted into the Oregon Sports Hall of Fame, 1997

• Inducted into the Braves Hall of Fame, 2000 (joining Phil Niekro and Hank Aaron, among others)

• Founder of the I Won’t Cheat Foundation in 2005, whose mission is to encourage character development among youth