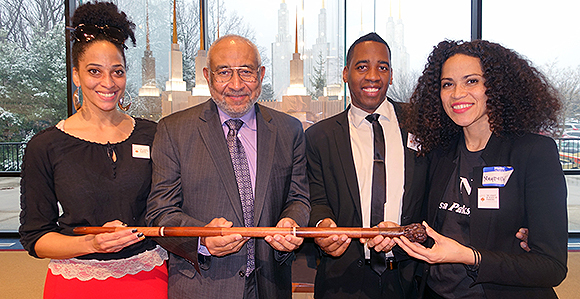 This year marks the 40th anniversary of the revelation on the priesthood in June 1978, which allowed all worthy black male Church members’ to have the priesthood. As we celebrate this event, let us learn more about our black brothers and sisters around the world.

“I learned things here I wish I had known 33 years ago when I joined the LDS Church. They wouldn’t have changed my decision to be baptized—because the gospel is true—but they would have helped me.”

Gloria Smith’s comments echoed the sentiments of many who attended a historic two-day conference titled “The Legacy of Black LDS Pioneers” at the Washington D.C. Temple Visitors’ Center on February 17 and 18. As a black Latter-day Saint in the McLean 2nd Ward of the McLean Virginia Stake, Smith felt the day helped her realize she is not alone, she has a voice, and she has the opportunity to help correct misunderstandings about the place of black members in Church history and doctrine.

Nearly 800 Church members and friends from many parts of the U.S. attended the conference that offered educational, emotional, and spiritual support for everyone, but especially black members in the LDS community. On Saturday, it featured speakers and discussion groups on black history and contemporary black issues. Some in the group also attended a temple session. Many participants attended Church services on Sunday in either the Anacostia Ward, Suitland Maryland Stake, or the Washington D.C. 3rd Ward, Washington D.C. Stake, and they later gathered for a “Why I Believe” devotional at the visitors’ center.