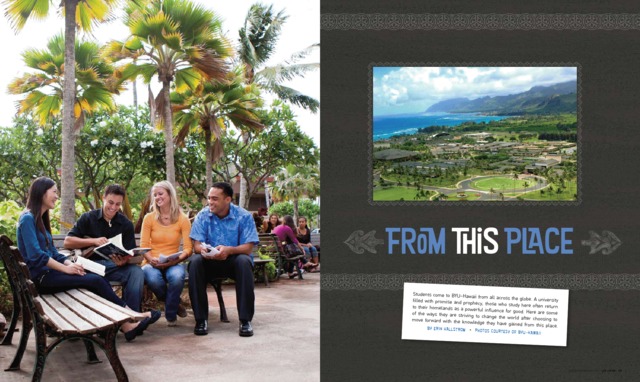 How BYU-Hawaii Students are Changing the World

*Editor's note: This is an excerpt from "From This Place." Read the full article in the Jan/Feb 2011 issue of LDS Living magazine.

At 12 years old, Salisha Allard didn’t know how to read. In April, she will graduate with a bachelor’s degree in English from BYU–Hawaii.

As a child, she says, “I hated everyone; I hated people.” Currently, Allard is the vice president of service in BYU–Hawaii’s student organization.

If you met Allard today, the first thing you’d notice is her smile. It’s big—the kind of smile that lights up a room. She is happy and friendly with an easy laugh—a complete contrast to the trials and events she has faced in her life. But Allard’s beaming existence hasn’t completely sunk in. When she thinks of herself as an educated, well-spoken, and faith-filled woman, she can’t help but wonder, “Is that really Salisha?” It is.

Salisha Allard's decision to come to BYU–Hawaii is among the most poignant. When she was 9 years old, her mother died and she was sent to live with her father in her home country of Grenada.

While her father loved her, he struggled financially and Salisha was typically left to fend for herself.

“Scorned" is the word Allard uses to describe how she felt—she was picked on by schoolmates and dismissed by most adults as dirty and a disturbance. The worst part? She believed it. She thought she was “a nothing, a nobody.” Tragically, her father died when she was 15, officially leaving Allard an orphan.

The change in Allard’s life began with one woman. This kind neighbor took her in, taught her to read, fed her, and clothed her. She bought Allard her first pair of shoes and paid for her to attend high school. This woman was also the means that led Allard to the gospel, although she was not a member herself. Her daughter started attending the local LDS meetings and asked Allard to come along one Sunday. It didn’t take Allard long to feel the Spirit, and she asked to be baptized that first Sunday.

It took some persistence and patience before she could become a member of the Church, but her persistence paid off. Once a member, Allard loved the Young Women program. There she learned about “divine nature”—a concept she hadn’t felt or heard of before. “I never felt important, like I am somebody,” she says. “I never knew that.”

Allard recalls a day when a leader invited Allard to her house and they sat on her bed, ate popcorn, and watched a movie. To this day, that simple act evokes sincere emotion.

While driving in the car one day, Allard’s Young Women leader asked Allard if she wanted to go to BYU. The answer was an energetic yes—even though she had no means and no idea of how to make such an inconceivable goal happen. But her Young Women leader did. She helped Allard fill out an application and find a sponsor to pay half of her tuition. Shortly after that, Allard arrived in Hawaii. And now she can’t believe her life. “I am so grateful that I am somebody . . . I just never knew I was a person,” she says.

Allard is grateful every day—every second, in fact. Because of this, she has to serve people. She doesn’t see it as an obligation. It’s just part of who she is. “Service is the most important aspect of my life right now,” she says. “It just takes one little thing to completely change a life.”

Allard’s story is unique, but on the campus of BYU–Hawaii, being unique isn’t, well, unique. With less than 3,000 students enrolled—who represent 75 countries—there is as much diversity of circumstance as there is culture. Everyone has a story leading to their enrollment—some are dramatic, others are personal. But regardless of the road (or boat or plane) that led these students to this small school in the Pacific, it’s clear they are here for a uniquely wonderful purpose.

Raised in the Church by returned missionary converts, Felix Callejas came home to El Salvador after serving his mission in Guatemala, anxiously awaiting his next step in life. Knowing he wanted to seek higher education, he applied to all four Church schools and was frustrated to learn none had space for him.

Callejas thought there must be a reason the next step of his life was being postponed, so he turned inward to receive an answer. He strongly felt he was needed at home to teach his grandmother the gospel and baptize her.

The Monday after his grandmother was baptized, Callejas received his acceptance to BYU–Hawaii. Coincidence? Felix feels otherwise. “The Lord brought me here,” he says.

“One man said the world needs men who cannot be bought or sold, men who will scorn to violate truth, genuine gold. That is what this school is going to produce.”

You hear the word prophecy constantly when visiting or reading about BYU–Hawaii—and for good reason. President David O. McKay’s speech at the groundbreaking for the school was filled with specific statements declaring a distinctive mission and prophesying of its vast influence. His words are repeated and remembered by all associated with the university. What’s more, his prophetic statements are being fulfilled by every student who attends.

While not a member, Boo YooN Choi of South Korea always knew about the Church. Her aunt, a convert, brought her to Church occasionally and made sure she knew its precepts. In her junior year of high school, Choi started thinking ahead to after graduation. Seeing an opportunity, her aunt mentioned a Church school in Hawaii and encouraged her to think about attending. Interested in languages, Choi knew Hawaii would be a great opportunity to grow professionally, but the idea of living in another country was intimidating. During her senior year of high school, Boo Yoon decided to be baptized. It was at this point she prayed for guidance and finally felt comfortable with the decision to attend BYU–Hawaii.

odBaYar BadaMjav (Ogi) was the second person in his family to join the Church. Two years later, his mother and other siblings followed him into the waters of baptism, and a year after that, he left on a mission to his home country of Mongolia.

Badamjav loved his mission. Normally quiet and soft-spoken, his words get stronger and brim with emotion when he talks about those two years. It was Badamjav’s mission president who suggested he consider school at BYU–Hawaii.

“From this school, I’ll tell you, will go men and women whose influence will be felt for good towards the establishment of peace internationally.” —David O. Mckay

When asked to define BYU–Hawaii mission, Hippolite Wright says easily, “To build leaders who will be an influence for good in the world.” This mission is clear to everyone—students, teachers, administration—and influences class work, extracurricular programs, and even Church worship. Recently, a consultant visited the school and after observing the environment declared she had never visited a campus with such single-minded focus on its mission.

“We all feel very passionate and committed to the mission,” she says.

Current BYU–Hawaii President Steven C. Wheelright has said, “Our real charge as a university is not to prepare them for the world we grew up in but for the world they’re going to be in and that they’re going to have to help lead. . . . It is about the total experience, and how well these young men and women are prepared.”

With so many students attending from under-developed countries, this is not only an educational experience, but for some a first exposure to worshipping in a full ecclesiastical unit. While students are learning the skills to support their families in class, they are also learning to serve from each other and through Church—and are preparing to become future Relief Society presidents and bishops in the process.

BYU–Hawaii feels the urgency. The world needs leaders. Leaders who are honest and filled with integrity. Leaders who seek truth and are motivated to be a positive force for good. Leaders who are seasoned and prepared to build the kingdom of God in whatever corner of the world they live. President McKay prophesied the school would produce leaders, “not only on this island but everywhere.”

Among its graduates are successful teachers, doctors, lawyers, and business leaders. Many are bishops, Relief Society presidents, stake presidents, area authorities, and even general authorities: Elder Yoon Hwan Choi of the First Quorum of the Seventy graduated from BYU–Hawaii in 1988 and returned to his home country of South Korea, first working in information systems and then accepting a full-time job for the Church as the regional manager for temporal affairs. In 2009, Elder Choi was called to the First Quorum of the Seventy.

Every year the university honors former students who embody the mission of the school and the characteristics spoken of by President McKay with the Genuine Gold award. An alum and Genuine Gold recipient herself, Dr. Hippolite Wright says, “There is one guarantee, [attending BYU–Hawaii] will impact a student’s life. There’s no getting around that. You can’t get away from it. If you come to BYU–Hawaii, your life will be changed.”

Salisha Allard looks forward to her graduation in April with special anticipation: after she finishes, she will meet her sponsor for the first time—an anonymous donor who has paid half of her tuition during her entire college career. She knows this sacrifice completely altered the course of her life, and she can’t wait to officially say thank you. Allard bursts with energy and happiness when talking about the love and gratitude she feels for her life.

“It is just so wonderful,” she says. “It is a real blessing—a life I have never lived before. I am grateful that people love me and grateful to know about Heavenly Father. He has blessed me in so many ways. I am always astounded.”

After graduation, Allard will go home and see family while regrouping before her next move. First up will be a master’s degree. Someday she wants to be a professor at a university in Grenada. She loves grammar and English literature, but she may also study social work. Ultimately, what Allard cares most about is to be prepared to pursue her dream of running an orphanage in Grenada.

Allard knows the difference one person can make in a life, and she longs to be an instrument of change in other children’s lives. “I want to give children love. I want to give [them] food and motivation to be somebody—to let them feel what it’s like to be somebody,” she says. “Because they are somebody.”

Byu HawaiiByu Hawaii,
Comments and feedback can be sent to feedback@ldsliving.com