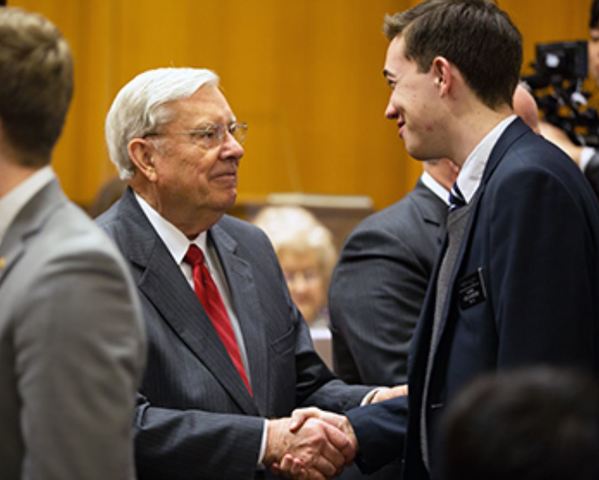 I have often taught that one of the ways you can be involved in sharing the gospel is to write down a date in the next two or three months that you want to have someone prepared to be taught by the missionaries. Then ask your Father in Heaven for guidance and help. Ask Him to bless you to be alert and prepared.

Let me share with you a couple of experiences members have had in doing this. Sometime after I talked about this concept in general conference, I received from a woman a letter that was quite startling in content. It said, “Dear Brother Ballard. I hate to tell you this but you are a false prophet. I did what you told us to do, and we had no success. Therefore you should not be teaching the people to do this.” She really got after me. It was not a gentle letter.

Well, I read it, and I have learned when I receive a letter like that not to answer it for a couple of days so I can think it through a little better. The thought came to me: “I am not going to answer the letter in writing; I am going to call her on the telephone and talk to her.” So I tracked her down and got her on the phone. I said, “This is Elder Ballard.” And she said, “Who?” I said, “This is Elder Ballard of the Quorum of the Twelve Apostles. I am calling you about your letter.” There was dead silence for a moment. I said, “I am calling to apologize to you. I am terribly sorry that you have had such unfortunate circumstances in attempting to do missionary work by setting a date. I am asking you if you will forgive me.”

She said, “Oh, Brother Ballard, you didn’t need to call me. I just wanted to bring to your attention that it didn’t work.”

I said, “Will you forgive me?”

I said, “Would you also be kind enough to answer one question?” She responded that she would if she could.

“Will you tell me whom you talked to during the time that you were fasting and praying to find somebody for the missionaries to teach?”

I asked, “Are you still there?”

“In other words, what you thought I said was all you had to do was pray and fast and then in some miraculous way you would have someone for the missionaries to teach?”

Calling her by name, I said, “Would you set another date, only this time will you talk to the people in the grocery store, at the service station, in the beauty parlor? Everywhere you go, will you open your mouth and let the Lord help you be successful with this effort?” She was a good sport and said she would.

It was less than a month later that I received another letter telling me that the missionaries were teaching a family in their home that she had met at the grocery store.

I taught that concept in a stake conference, and everybody was excited. They were going to do it. Then, about six months later, I got a letter from the wonderful stake president in whose home I had stayed in that area. Here is what his letter said:

“Dear Elder Ballard, your words have been haunting me for six months. I have known I should set a date with my family, but we hadn’t done it. Then we finally did. A month ago we set a date. When we did that we started to pray. The first fast Sunday, we fasted with that as our purpose. I want to tell you what happened.”

This stake president was an attorney. The very week that they set a date as a family, a young couple came to his law office. They had been referred to him as one who would treat them well and be honest and fair with them in helping them finalize their divorce.

The letter continued: “I looked at that couple and said something I never ever dreamed I would ever say to a potential client: ‘You don’t need a divorce. What you need is the gospel of Jesus Christ. Now, what I would like you to do is let me teach you about the restoration of the gospel of Jesus Christ. If when we conclude you have not resolved to stay together and make your marriage a success, then I will handle your divorce and not charge you a penny.’”

He and his family had been on their knees praying for guidance, and the Spirit prompted him about what to say to the couple.

Well, after the missionaries taught them the gospel, they were baptized. They found the greatest thing in their life the day they walked into the stake president’s law office.

Learn more great gospel insights and messages from Elder Ballard in Yesterday, Today, and Forever, available at Deseret Book stores and on deseretbook.com.