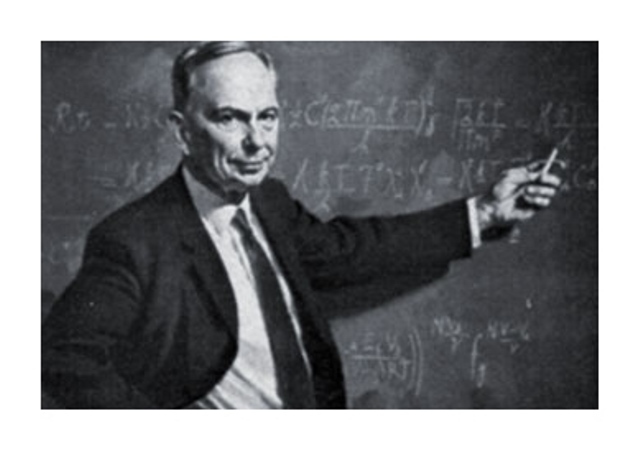 Professor Henry Eyring of Princeton University asked a fellow scientist if he would like to collaborate on a chemical kinetics research project. The scientist refused, believing “they would never live long enough to finish the problem.” Henry countered, “That’s true if we don’t learn anything while we are working on the problem.”

When asked how the world began, Henry answered, “I believe whichever way it turns out actually to have been.” His open attitude in the pursuit of truth led him to discoveries that caused the scientific community to sit up and take notice. But to Henry, no truth was more satisfying than his discovery of a pleasing harmony between religion and science.

Henry attended and graduated from high school in Pima, Arizona with a $500 scholarship awarded for excellence in academic performance. In 1923 Henry received his bachelor’s degree in mining engineering from the University of Arizona. In 1924 he earned a master’s degree in metallurgical engineering and in 1927 a Ph.D. in chemistry from the University of California at Berkeley.

While employed as a researcher and lab instructor at the University of Wisconsin, Henry met Mildred Bennion, a University of Utah professor. They were married on August 24, 1928, in the Chicago Mission home and later sealed in the Salt Lake Temple. Mildred encouraged Henry in his pursuit of scientific truths. Together they traveled to Berlin, Germany, so Henry could research at the Haber Institute. When they returned to the United States, Henry accepted a professorship at Princeton University. As a professor, he encouraged struggling students by simplifying complex concepts. “The world knocks them down,” said Henry. “I try to build them up.”

Although Henry was admired and respected by his students, it was his scientific discoveries that propelled him to the forefront of academia. He received a prestigious prize from the American Association for the Advancement of Science. In 1933 the New York Times reported that Henry had applied truths of quantum mechanics to chemistry, finding that the principles of mechanics also held true in other branches of science. In 1946 Henry left Princeton to become dean of the Chemistry Department at the University of Utah.

Anticipating Henry’s move, Church authorities invited him to serve on the General Sunday School Board and to chair the Gospel Doctrine Committee. In these capacities, Henry associated with Church leaders who often remarked about his unusual ability to blend science and religion. “If an idea is wrong, it will fail,” Henry told the brethren. “If it is right, nothing can stop it.” Henry once told President Joseph Fielding Smith that he recognized that “the church is committed to the truth whatever its source.” Henry was a strong proponent of the concept that there was no person too insignificant to learn the truths that he knew; there was no one too small to be dismissed as incapable of contributing to the cause of finding truth.

►You may also like: 3 Mormon Scientists Explain Why Religion & Science Aren't Really at Odds

Henry made a marked difference through his unwavering Church service. In 1976 he was awarded the prestigious Berzelius Medal, an honor that pleased him greatly because the award was given “only once every 50 years.” He was nominated for a Nobel Prize and awarded the coveted Wolf Prize in chemistry for his “imaginative applications to chemical and physical processes.” Henry wrote more than six hundred published articles on topics ranging from chemistry to religion, and the scientific papers he was writing before his death were published posthumously.

In their book, Men of Character, Lloyd D. Newell, Susan Easton Black, and Mary Jane Woodger provide a glimpse into the lives of 100 influential LDS men. From the lives of Alex Boyé and Mack Wilberg to the histories of Orson Hyde and Lorenzo Snow, these stories teach powerful messages about life, love, and the determination to do one's best.

Read more about Henry Eyring and other significant men in this dispensation in Men of Character: Profiles of 100 Prominent LDS Men, available at Deseret Book Stores and deseretbook.com.