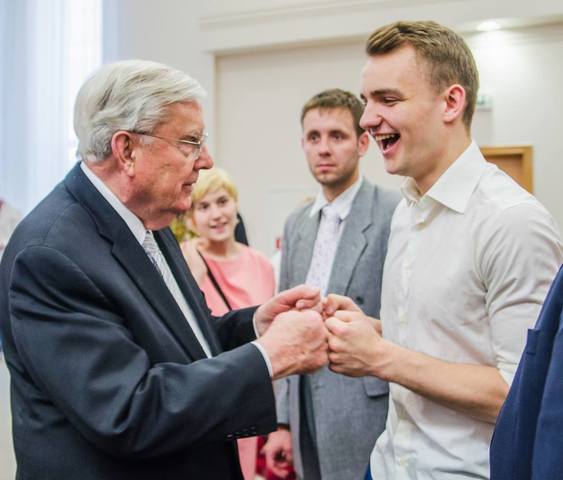 byM. Russell Ballard, adapted from "When Thou Art Converted: Continuing Our Search for Happiness" | Aug. 11, 2018

Some years ago there was a rather serious tragedy in our ward. A great woman, the wife of our former bishop and a woman beloved and respected in our ward family, contracted cancer of the worst kind. This was a vivacious, effervescent woman who lifted and inspired everyone she met. As the disease became worse, I gave her blessings. Other General Authorities gave her blessings. One of the blessings I gave was in the presence of her seventeen-year-old son. Another blessing was given to her when her son was eighteen. Our Heavenly Father, though, had something else in mind for her, and she was taken home to Him.

A few days after the funeral service, I visited the father. I put my arm around him and asked, "What can I do to help?"

His response was direct and heartfelt: "Help my son to understand."

Oh, how those words penetrated my mind. "What does he need to understand?" I asked.

"Why God would allow his dear mother to suffer the way she did," he said. "Russ, my son and my wife were the very best of friends. You have never seen a mother and son as close as they were. He loved her deeply. He prayed for her. He heard all the blessings that were given. He had faith that she would be healed—or, at the very least, would not have to suffer. Yet she suffered and died. He doesn't understand why."

For days I tried to get in touch with this young man. I called his home about twenty times without success. I finally wrote him a letter and invited him to have lunch with me at the Church Administration Building. I prayed that his heart would be touched to feel my love and concern. One Tuesday I returned to the office from a conference assignment, and my secretary informed me that my young neighbor and I had a lunch appointment for the following day.

He arrived the next day exactly on time. We went down to the General Authority lunchroom. As we sat there, eating and chatting, six Apostles came in for lunch. Now, I must tell you that I've eaten lunch there many times, and I've rarely seen six of the Twelve there at the same time. One by one, all six came over to the table where we were sitting to greet us.

Elder Monson (this was before he was called to the First Presidency) stopped at our table. This tall, powerful Apostle reached over and ruffled my young friend's hair just a bit and said, "Are you getting this young man ready for a mission, Russ?" At the time this young man was not prepared to hear about serving a mission. Two of the other members of the Twelve greeted us in a similar way. I could see my neighbor squirm a little each time.

After lunch, we went up to my office. For ninety minutes I tried to answer some of the questions that had been troubling him since his mother's death. It isn't easy to explain to a boy who adored his mother why priesthood blessings didn't heal her. He couldn't understand. He was struggling inwardly. I don't know that what I said did much good, but we had a nice visit together. As we walked out of my office to go toward the elevator, we saw that Elder L. Tom Perry's office door was open. We could see him sitting behind his desk. I knocked on his door and asked, "May I introduce you to a friend of mine?"

"Elder Perry," I said. "This is my neighbor. He lost his mother just recently. She died of cancer, and he's having a hard time understanding spiritually why his mother had to die the way she did."

Then Elder Perry—and I'll love him all the days of my life for what he did—wrapped his hands around my friend's hand and looked him right in the eye (this took some doing, because Elder Perry is about six- feet, four-inches tall). He said, "My boy, I understand exactly how you feel. I lost my wife two years ago with the same disease. Now, son, you must keep the eternal perspective." And then he taught him, as beautifully as I have ever heard, the eternal nature of man in a matter of a few minutes. It was a remarkable sermon, simply and powerfully stated, and I could see it had an effect on my neighbor.

We left and walked down the hallway. By this time we had met seven of the Apostles. As we turned the corner, out walked Elder David B. Haight, the eighth Apostle we had met. I've gone several days at a time without seeing that many Apostles around Church headquarters, and here we were seeing them within a matter of an hour or two. Elder Haight came up, put his arm around this young man, and asked, "Getting ready to go on a mission?" By this time my friend had no idea how to respond. He just gulped. Hard.

We got on the elevator and went down to the basement to walk to the parking lot. In the elevator I took hold of his arm and said to him, "Your mother knows you are here, and your mother is a good friend of the Lord's. It is because of her that you are having this experience. We all love you, son. Try to keep the eternal perspective."

As we stepped off the elevator, we saw President Kimball walk through the back doors of the Church Administration Building. I was holding onto my friend's arm, and I felt a physical jolt hit him when he saw the prophet. It was as though somebody had touched him with a live electrical wire. We stood there a minute silently. Finally, he looked at me and asked, "Brother Ballard, does President Kimball ever see somebody like me?"

We went back into the Church Administration Building and called Arthur Haycock, who was President Kimball's secretary. I explained to him the situation and asked if the prophet would have a minute to see us. Brother Haycock invited us to come right up. As busy as President Kimball was, he was going to take the time for a boy who was struggling.

We walked into his office. President Kimball got up from his desk and walked around to greet us. He took hold of my neighbor's hands and looked deeply into his eyes—and into his heart.

Can you imagine having the prophet of the Lord answer your question that personally and that directly? It was an extraordinary moment for my young friend—and for me.

President Kimball invited my neighbor to sit and talk with him. They talked about "Tragedy or Destiny?" a great sermon President Kimball had delivered when he was an Apostle. It was given at the time of a terrible airplane accident in which nearly fifty members of the Mormon Tabernacle Choir were killed. All around the Church people were asking why the Lord would allow such a thing to happen. President Kimball tried to answer why in this great sermon, which was published in pamphlet form. Now, he produced a copy of that pamphlet and wrote on the inside cover: "To [my friend], Affectionately, Spencer W. Kimball," and handed it to him.

Then he taught us a great lesson I will never forget. He said, "My boy, I've had some difficult times in my life. I didn't like the idea of having my vocal cords operated on. I didn't want that to happen. I didn't like the idea of being opened up when I was in my late seventies to have my heart worked on. But let me tell you something. Through my suffering, I have come to know God." Then President Kimball took hold of my friend, drew him close, and gave him a hug. Then he gave me a hug.

My friend and I turned to leave. Just as we were walking out the door, President Kimball called after us, "When you return from your mission, young man, you will understand more of what I am saying."

Fifteen minutes later we were standing in the parking lot, reflecting on the experience we had just shared.

"Did you hear what the President said to you?" I asked. "Did you really hear?"

"But did you hear what he said about a mission?" I pressed. "He said, 'When you return from your mission, you will understand.'

"Of course, President Kimball has asked every worthy young man to go on a mission," I continued. "But you have been called specifically, so I think you have a lot to do. Instead of going back to work today, I think you need to go home so you can privately ponder and pray during the rest of the afternoon about what has happened."

That is just what he did. Another neighbor told me that she took dinner over to the family, and when my friend came to the door she could see that he was emotionally drained.

"What in the world has happened?" she asked.

"Oh, come in," he said. "The most wonderful thing happened to me today. I've learned for myself that my mother is all right and that the one who is sick is me."

Just a few months later, I had the great pleasure of standing before a gathering of the First Presidency, the Quorum of the Twelve Apostles and other General Authorities in the Salt Lake Temple and announcing that our young friend had, that very morning, entered the Missionary Training Center en route to his mission. President Kimball looked at me, and we shared a smile. By following the counsel of a living prophet, my young friend's faith was strengthened, once again becoming an anchor in his life.

Our latter-day prophets have warned us of our sobering obligation to prepare for "the great and dreadful day of the Lord" (D&C 2:1). There is still much to be done. It is a day of urgency in the Lord's work. Our prophet is picking up the pace. We must be prepared to keep up with him, stride for lengthened stride.

As we strive to lengthen our stride, I cannot emphasize enough the importance of following the prophet and the Apostles. In today's world, where twenty-four hours a day the media's talking heads spew forth conflicting opinions, where men and women jockey for everything from your money to your vote, there is one clear, unpolluted, unbiased voice that you can always count on. And that is the voice of the living prophet and the Apostles. Their only motive is "the everlasting welfare of your souls" (2 Nephi 2:30).

Think of it! Think about the value of having a source of information you can always count on, that will always have your eternal interests at heart, and that will always provide inspired truth. That's a phenomenal gift and guide, a wonderful strong link we can rely on. 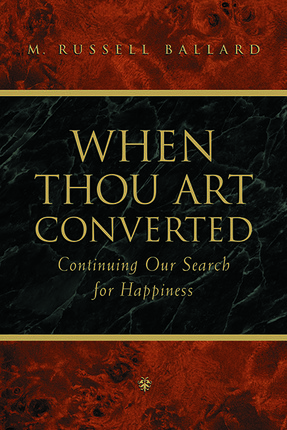 “Being a Christian, being spiritually born of God, is not a Sunday-only thing,” writes President M. Russell Ballard of the Quorum of the Twelve Apostles. “Nor is it limited to our service and associations in The Church of Jesus Christ of Latter-day Saints.”

InWhen Thou Art Converted, President Ballard shows us that we manifest our belief in Christ and our acceptance of Him as our Savior by the way we live our lives. The most important way we “stand as witnesses of God at all times, and in all things, and in all places” is in the daily choices we make.