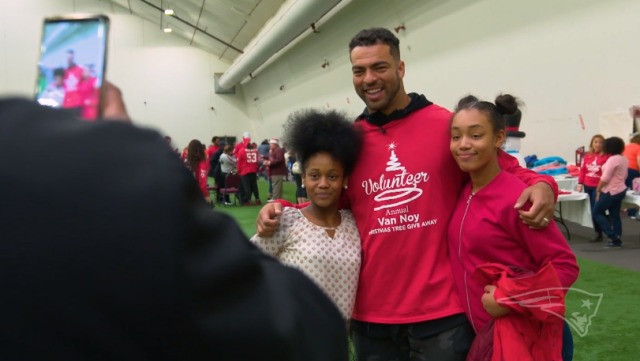 "I was blessed with a second chance when I was younger! It’s moments like these that make me so grateful to be where I am today," second-time Super Bowl champion Kyle Van Noy posted on game day. "Don’t give up on your dreams and remember the man upstairs is always with, even when its the darkest times."

I was blessed with a 2nd chance when I was younger! It’s moments like these that make me so grateful to be where I am today! Don’t give up on your dreams and remember the man upstairs is always with even when its the darkest times... One last ride with my dawgs for it all this season! LFG!!! #Everythingwegot #patsnation #775Kid #peanutbutterandjealous #proudmoment #SuperBowl #champ #passion

Kyle Van Noy knows just how important getting a second chance can be.

The New England Patriots middle linebacker has made the most of his second chances by overcoming one obstacle after another on his journey to the NFL. And it is paying off—Van Noy made his third straight appearance in the Super Bowl this Sunday against the Los Angeles Rams.

But the road to get there wasn’t always a smooth one—it was paved with second chances.

"No one is perfect," Van Noy said, according to CBS. "I don't like it when people have the perception that Mormons are perfect or they have that thing that all of them are holy-type people. We're like everybody else. We just believe in something different."

Second Chances on the Gridiron

Growing up in Reno, Nevada, the star athlete knew he wanted to end up at Brigham Young University and verbally committed to the Cougars.

“I didn’t want to go to a school where I knew I’d face challenges and temptations,” Van Noy told Jeff Benedict, for the Deseret News. “I knew I needed an environment like BYU.”

However, Van Noy was arrested for a DUI a few days before he was set to sign an official letter of intent, putting his future with the Cougars in jeopardy. He called the BYU head coach at the time, Bronco Mendenhall, to discuss his options. BYU decided that Van Noy would sit out a year before joining the Cougars. Van Noy was determined to honor his commitment to BYU, despite the many phone calls from coaches all around the country telling him he could play immediately at their school, and he agreed to sit out the 2009 season. 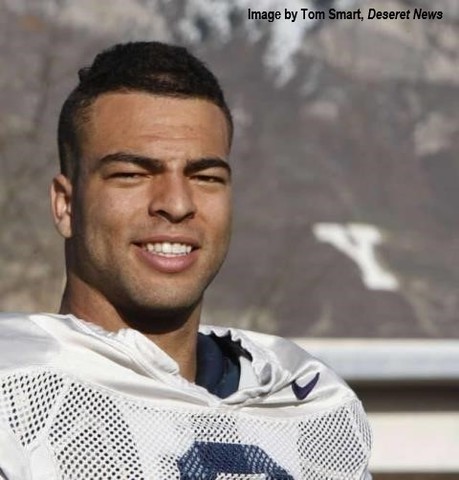 His legal troubles weren't over. Just two weeks after signing with BYU, Van Noy ran into legal issues again. Because Van Noy was a minor, no one at BYU knew of the second indiscretion until the teen reported it to BYU himself. The then-17-year-old flew to Utah specifically to meet with Mendenhall face to face. Even though no charges were filed, Van Noy told his new coach of his minor run-in with the law, fearing it would cost him the scholarship he had accepted only weeks before. Mendenhall told him not to worry about it and gave him a hug.

Van Noy took advantage of the second chance Mendenhall and BYU gave him and quickly became a standout on the team. He would go on to a prolific career for the Cougars, known for his game-changing big plays, and become one of the best linebackers in BYU history.

Drafted by the Detroit Lions in the second round in 2014, Van Noy made little impact his first two seasons in the NFL and was essentially considered a draft bust. After being traded to New England for next to nothing in October 2016, Van Noy’s resilience showed itself once again. 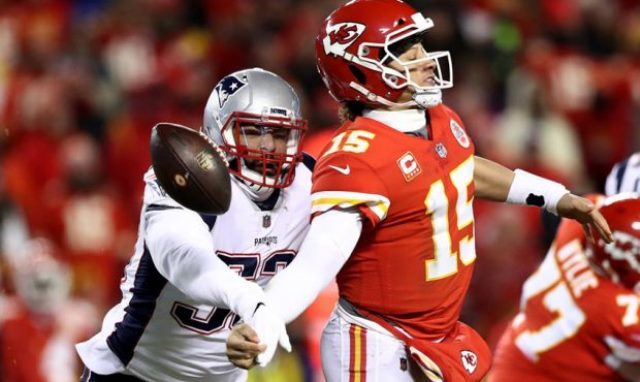 Patrick Mahomes of the Kansas City Chiefs fumbles the ball after he is hit by Kyle Van Noy of the New England Patriots in the AFC Championship Game on January 20, 2019. Image by Ronald Martinez, Getty Images

Van Noy capitalized on this new opportunity with his second NFL team and he flourished in legendary coach Bill Belichick’s system. Van Noy has only gotten better each season, earning a starting role at the beginning of the 2017 season and leading the team in tackles this year. In the AFC Championship game on January 20, 2019, he had arguably the best game of his NFL career—his game-high 10 tackles, career-high two sacks, and a forced fumble helped his team secure a trip to yet another Super Bowl.

Kyle Van Noy’s ultimate second chance, however, came very early in life, when he was given up for adoption. 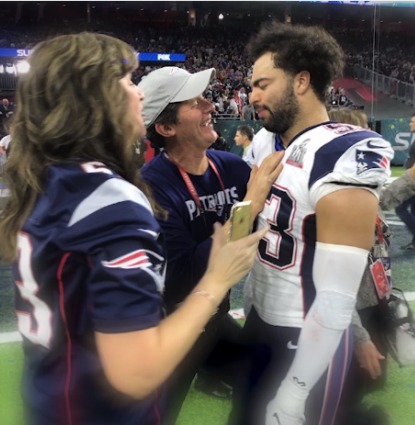 His biological mother wasn’t a member of The Church of Jesus Christ of Latter-day Saints but wanted her son raised in a Latter-day Saint home. She placed the baby with LDS Family Services, and Kyle was soon adopted by Layne and Kelly Van Noy.

Van Noy saw the impact adoption has had on his life and is using that unique, firsthand experience to bless the lives of others. He and his wife, Marissa, have become advocates for adoption and recently made a video addressing the topic.

“I feel like I was just brought into this earth a different way for the parents I was supposed to have," Kyle said in the video. “I am blessed to have the parents that I have. Just a huge blessing. I wouldn’t say ‘lucky,’ but 'blessed.'”

Not only was her husband adopted, but Marissa Van Noy’s father and brother were both adopted as well. 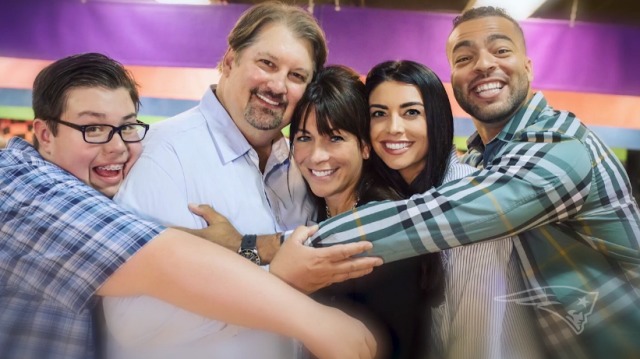 “For Kyle being adopted, He feels blessed going into a family that was so wonderful,” Marissa said in the video. “Our family feels the same way, receiving someone from adoption—it just makes your whole entire family whole. . . . We do advocate now for adoption; it’s a beautiful thing. It’s blessed our lives so much. I’ve seen it bless so many other people’s lives as well.”

The couple formed the Van Noy Valor Foundation in 2014 as a way to help adopted children and those in foster care realize their potential. What started out as a small charity has now expanded to multiple events each year, raising thousands of dollars for children in need.

Last month, Van Noy recruited his New England Patriot teammates for his “Celebrity Waiter” night, an event that enabled the charity to give away 253 Christmas trees, 600 coats, lights, ornaments, and Christmas gifts to foster kids. 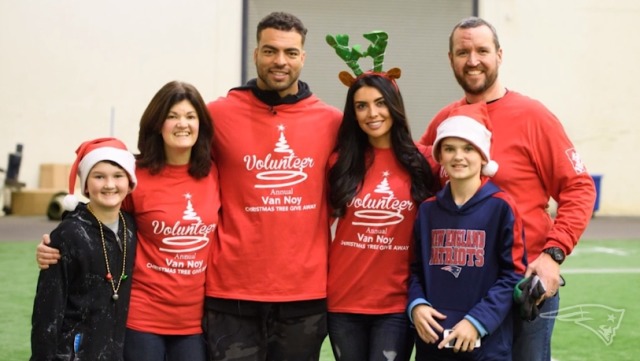 The 27-year-old credits his faith for teaching him the value of serving others.

“Always growing up we tried, with the religion that I am and the faith that I am, [to] always give back,” Kyle Van Noy told the Worcester Telegram.

His parents instilled those values in him from an early age. The Van Noy family would volunteer at the Salvation Army and help families in need every Christmas.

“It didn’t matter how much we had; it was always to give first,” Van Noy said. “We would maybe have a couple presents but give most of the presents to someone else because they needed it more. That’s how I was raised, and that’s who I was around.” 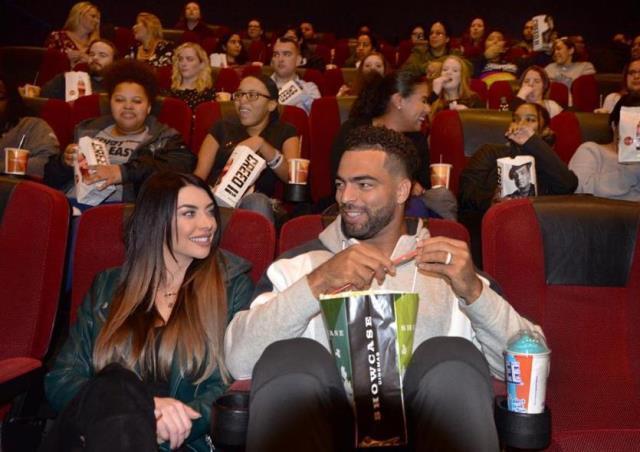 For Van Noy, it’s vital to show adopted and foster kids that second chances can truly make a difference in their lives.

“A lot of them sometimes get put in situations where . . . family situations are messed up,” Van Noy said. “[I tell them] that it’s okay, that it’s your parents' choices—it doesn’t mean that it’s your choices. You can choose to do something. I try to encourage them as best as possible.”

Kyle Van Noy has shown just how impactful making those choices can be and the difference second chances can make—both in his life and in the life of those he chooses to serve.

Lead image and other screenshots from www.patriots.com