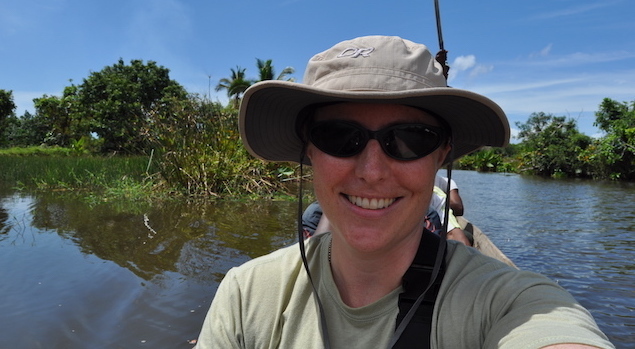 On this week’s episode of This is the Gospel, Elizabeth Elizabeth finds herself with the precarious situation of an infected foot while hiking in the depths of the Madagascar forest. In dire need of heavenly power, an unlikely source of inspiration prompts Elizabeth to realize that she just needs to ask for a miracle.

Read an adapted excerpt from the story below. You can also listen to the full episode here or read a full transcript here.

When I was a kid, I saw the show on the Discovery Channel about Madagascar, and how the forests were all being cut down and that lemurs only live there, and they were all endangered because of all this deforestation.

In 2013, I finally got to go to Madagascar. And I had three things that I wanted to do when I was there. I wanted to see a fossa. The fossa is the largest predator of lemurs in Madagascar, and I read that the best place to see him was Kirindy National Forest Park, so I went there. And then I wanted to do some volunteer work, so I found a place to volunteer for two weeks with nutrition for kids.

And then I wanted to hike in Masoala national park on the Masoala peninsula.

The trail was seven days long. We started on a pirogue, which is a little canoe that you can either paddle or push with a pole.

After we got off the pirogue, we started hiking, and that was the one place where like the trail was kind of wide, and there were villagers, people living there.

So on the first night, we stayed in a hotel which had one room and on my way to the shower, after I had taken off my boots, I noticed that I had this big blister in between my big toe and the bottom of my foot. Really strange place for blister, I've never gotten one there before.

And I wasn't worried about it, I've gotten so many blisters. I've never had a serious problem, it's just been painful.

During the night, my blister kind of filled up with fluid, and so when I started that second day, it almost immediately popped and Claudio, the guide, told me there'd be river crossings, so I was wearing my sandals that second day. There were river crossings, but also the trail was flooded because we were walking between rice paddies, and it was really dirty water because there were cows everywhere and the rivers weren't particularly clean either.

And so the trail was sometimes up to my shin in water and the river crossings were, mid-thigh, so it was a lot of splashing through water that second day. And at the end of the second day, I thought, "I gotta clean this blister as best as I can." I had some hand sanitizer and washed it off with that. I didn't think much of it because it's just a blister.

On the third day, I wore my boots again and I was just hiking along like normal and around the afternoon, my foot started to get pretty sore. But by the end of the day, as we were getting into the village where we're going to spend the night, I was trying really hard not to limp because my foot was so tender just to walk on.

When I got to my room and took my boot and socks off, my foot was red, and it was swollen. I couldn't even see my ankle bone. My little toes were like little red sausages, and my foot was hot to the touch, and it was infected. I didn't know how I was gonna walk the next day because it hurt so bad.

I was just in this little room with these little stick walls and I felt so alone because I was all by myself out there in Madagascar, in the middle of nowhere.

I had my little iPod touch with me. I knew I had conference talks on there. I had one by Elder Holland, and he talks about the apostles and how they must have felt after Jesus was crucified and was resurrected. And then he left, and they say, "Well, what do we do now?" And Peter says, "Well, I guess we just go back to fishing."

And then he paraphrases Jesus saying to them, "Shouldn't being with me for three years, shouldn't it have changed you?" I thought about how I've been changed by going to the temple and making my covenants there.

Just sitting there in that dark room with Elder Holland in that conference talk, it made me realize that I wasn't alone and that I could ask for the power to be healed, I could pray. So I did, I knelt down on the floor outside the mosquito netting, and I said a prayer and I said, "Heavenly Father, I know you can heal my foot. Even if you choose not to, I know you won't leave me here. You haven't abandoned me, something will work out."

I knew that because I try to keep my covenants, I had this power I could ask for to help me. The best part was that I got done with that prayer and I felt peaceful. I wasn't worried about it. I knew something would work out. I didn't feel so alone anymore.

After that prayer, I was able to get to sleep, and I woke up in the morning and my foot was back to normal size. It wasn't hot anymore, and it wasn't red. It was still a little sore, but it was healed. It was miraculous. The other blisters I had didn't bother me for the rest of the hike. I was able to finish the hike. I had a wonderful time.

It was just a fantastic experience, and I am so thankful that I could have that reassurance that I knew that I had that power to draw on and that I wasn't alone, that Heavenly Father wouldn't leave me and that I could ask for his help.