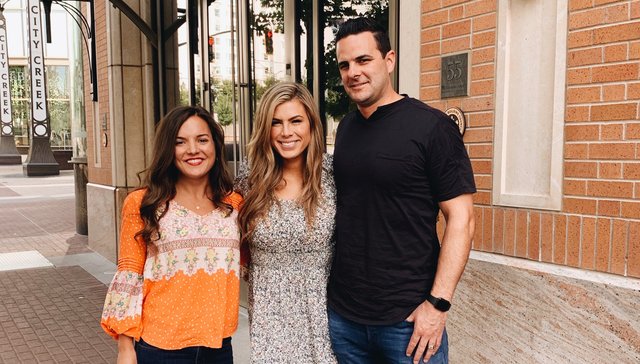 On this week’s episode of All In, Corrine Stokoe, the face behind the popular fashion deals blog Mint Arrow, recalled a conversation she had with her friend Mandi Gubler of popular DIY blog, Vintage Revivals and how that conversation served as a catalyst in she and her husband’s healing from pornography addiction.

Read Corrine and Neil Stokoe’s conversation with All In host, Morgan Jones, in the excerpt below or listen to the entire episode here.

Morgan Jones: At what point did you start to notice a change?

Corrine Stokoe: So Neil finally talked me into going to ARP with him and we went together for I don't know, at least another year or so. Neither of us were doing the steps. I was really angry at first, just super resentful toward everything recovery. I looked at the meetings as like a bunch of addicts that sat around together and like pat each other on the back and are like, "Hey, like, you know what, like, you had a hard week? Me too. It's okay." And I was just like, I'm so over this, like people being like, rah, rah recovery. This is so awesome. So, yeah, we went to the meetings together for probably, I don't know, at least a year or so. And Neil's last big relapse was super hard on me. That was conference weekend, two and a half years ago, in October, and I found out that he'd been lying to me and I became, I was like undone by it. It was really, really upsetting to me. I had thought for several months, he was doing great. And I found out that he wasn't and I called Mandi Gubler, who ended up being my sponsor later, but she was the one that had introduced us to ARP. And I said, I don't know how much longer I can do this. I was just so upset and I didn't want to get divorced. But I just was like, I don't know how many more times I can...I describe it as feeling like somebody hit me with a semi-truck and just laying in the middle of a highway. Like that's how it would feel every time I would find out that I had been lied to. And so she just listened to me for a minute. And then she said, "Are you calling me because you need someone to listen to? Or are you calling me because you want to do something about it?" And I was like, "I will do anything," and she said "Okay, you need to do the steps."

And so I started doing the steps for myself because I needed peace at whatever costs. And magically just like it explains in the book, "Codependent No More," and just like anyone who understands how to overcome codependency, when you start taking care of yourself and you stop taking care of the addict a lot of times they start taking care of their own problems because you're not sitting there trying to you know, manage their addiction, manage their recovery, so I really, I don't know I just kind of told Neil, "I'm done doing this for you so you can do what you want."

Neil Stokoe: And that was a powerful moment for me because I think a lot of the time I think I had gotten to a point where I just kind of got into a weird space. There's the codependency thing, you're kind of doing that dance of back and forth of exchanging you know, "You're hurting me," and "I'm resentful because you're checking up on me" or all this stuff that comes out. And I think finally when that broke, and I was like, first of all, I recognized, I'm like, "Okay, I just, I don't have this at all, all this great knowledge, tens of thousands of dollars that we pay, I've been going to these meetings for years. I'm just not getting it. I really feel like I'm like, I'm just terminally unique. I'm gonna die this way. Like, I know, recovery doesn't work for me. I've been to it, I've tried it, nothing works. I'm just one of those cases that it's just not going to happen." And I kind of was really at a low point after that. And so finally, that's when I was like, "Alright, I will pick up this manual. And I will just answer these questions and I'll study it and then I'll talk to, you know, there's a drug addict in the meeting that I really liked what he said. I was like, "Hey man, can you sponsor me?" So I started talking to him after I'd work a step and he'd kind of talked to me about the concepts and principles and helped me apply it to my life. And so I just I think at that point, I honestly started working the program. And when Corrine came to me and she said, "You know what, you know," and it wasn't vengefully or with resentment, it was just kind of like, "Hey, whatever you do, I will be fine. I will be okay. I've got a connection with Heavenly Father, I'm good. It's all you." I think that moment, it was almost freeing to me and just to be like, "Wow, okay, I can no longer use my wife as something, a reason to act out or like, an excuse to engage my addiction." I'm like, "It's all on me. If I sink or swim, it's all on me." And so at that point, I really was engaging in the program and working the steps and I think I got 100 percent honest with myself and with those around me at that point.