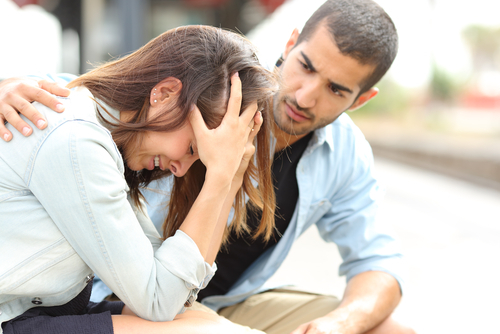 How We've Been Misunderstanding God's Title of "Savior"

byFiona Givens and Terryl Givens, excerpted from "The Christ Who Heals" | Nov. 06, 2017

That we believe about God and Christ—Their nature, Their attributes, Their character—shapes our response to the Heavenly Family and Their designs for us. Arguments about the cosmological location of  Kolob will not advance our salvation. Ascertaining the true depth and extent of God’s love, however, will.

The scriptures we inherited tragically misrepresent a divine nature that Jacob 5, with its mourning, ever-solicitous Gardener, and Moses 7, with Enoch’s account of a weeping God the Father, restores. Our tendency—almost irresistibly urged upon us by our Protestant heritage—is to move from seeing ourselves as wounded to calling our condition blindness, and then removing mercy and aggravating circumstances from the equation altogether and dwelling on our supposed “wickedness.” Elder Dale G. Renlund has urged a vocabulary more consistent with this early Book of Mormon language:

As the Good Shepherd, Jesus Christ views disease in His sheep as a condition that needs treatment, care, and compassion. This shepherd, our Good Shepherd, finds joy in seeing His diseased sheep progress toward healing. The Savior foretold that He would “feed his flock like a shepherd, . . . bind up that which [is] broken, and . . . strengthen that which [is] sick.” Though apostate Israel was depicted as being consumed with sinful “wounds, and bruises, and putrifying sores,” the Savior encouraged, exhorted, and promised healing.

It is true that some Book of Mormon passages reflect a dour appraisal of human character, especially the words of King Benjamin that “the natural man is an enemy to God, . . . and will be, forever and ever, unless he . . . putteth off the natural man.” The expression “natural man” is, of course, Pauline. As Paul employs the term (in 1 Corinthians 2:12–15), it has reference to an acquired worldliness; it is not a statement about human ontology, inherited nature, or innate attributes. In his triple parallelism, the apostle contrasts “the spirit of the world” with the spirit that is “of God”; what “man’s wisdom teacheth” with what “the Holy Ghost teacheth”; and “the natural man” with him “that is spiritual.” The “spirit of the world,” “man’s wisdom,” and the “natural man,” then, all refer to something we pick up as mortal baggage. They are not an attribute of our original nature.

Joseph Smith’s expansive, ennobling innovation was to see our Heavenly Parents’ plan—from the beginning—as being about human elevation rather than remedy, advancement rather than repair, exaltation rather than reclamation. One religious historian describes the entire array of 19th-century “deists and freethinkers, universalists, Stone-Campbell ‘Christians,’ Adventists, Christian Scientists” as a fractious rebellion against the Augustinian heritage, but he notes that only the “Mormons . . .  abandoned predestination’s entire substructure in original sin.”

At the same time, it would be wrong to conclude from the above that the Fall does not represent for Mormons, as for other Christians, a radical alteration of the human predicament. Mormonism does accept the prevalence of sin in the present world, human susceptibility to “natural” tendencies, and the need for spiritual regeneration. As the Book of Mormon declares, “All mankind, yea, men and women, all nations, kindreds, tongues and people, must be born again; yea, born of God, changed from their carnal and fallen [corruptible] state, to a state of righteousness, being redeemed of God, becoming his sons and daughters” (Mosiah 27: 25).

Joseph Smith died 15 years before Darwin’s famous treatise was published but would doubtless have found his version of evolution at least consistent with his understanding of human nature. Not metaphysically transmitted sinfulness but biologically inherited instincts threaten to overwhelm the goodness that originally inheres in the human spirit. “When our spirits took possession of these tabernacles,” preached Brigham Young, “they were as pure as the angels of God, wherefore total depravity cannot be a true doctrine.”

On the other hand, Young acknowledges that “the body is of the earth, . . . and is under the mighty influence of that fallen nature that is of the earth.” The heritage entailed by material, bodily inheritance, not imputed guilt, is the problem. In this context, the mortal condition is not the unfortunate detritus of  the couple Adam’s catastrophic decision but, rather, a consequence of entirely natural processes and biological forces that bequeath upon us a fraught inheritance.

Joseph Smith taught the primal innocence of humans, but he was under no illusions about their susceptibility to the evil in the world and their capacity to sin. He unhesitatingly acknowledged that “in this world mankind are naturally selfish, ambitious, & striving to excel one above another.” In a Church editorial, he complained that “Satan was generally blamed for the evils which we did, but if he was the cause of all our wickedness, men could not be condemned.” Some pain and suffering, in other words, can be laid squarely at our own willful decisions to sin.

At the same time, however, Joseph noted that “what many people call sin was not sin & he did many things to break down superstition.” Neither guilt nor corruption of the will follows upon the Adamic Fall: they do not define us. The human condition is one of vulnerability to temptation, susceptibility to the natural predispositions of a human body, and a soul still untried and untested in the crucible of mortal existence. When Paul wrote of his fear lest we be “overcome of evil,” it was likely the world’s pain and suffering, not our personal proclivities, that were his concern. Succumbing to despair, not wickedness, is the temptation of the tenderhearted. In Mormon thought, humans are neither capable of unaided advancement to godliness nor accurately described as depraved. They are agents made free by Christ’s Atonement, enticed by darkness while yearning for the light.

We do not dispute that in Christ we overcome sin, corruption, and death. We nonetheless believe that the effects of privileging words like reversal over advancement, corruption over woundedness, and sin over pain frame our purpose in life with a defeatist posture while doing injustice to God’s plan, Christ’s nature, and our predicament.

In early America, schoolchildren often learned their letters from a single sheet mounted on a wooden tablet, called a hornbook. Today, a children’s primer might begin with “A is  for apple.” But generations of impressionable children began their journey to literacy with the printed phrase, “In Adam’s fall, we sinned all.” The symbolic import of this historic practice is profound. One could not so much as learn to read, to begin one’s schooling, to become socialized into the Christian world of the educated and cultured, without first mastering the foundational sentence of what was supposedly both religious and academic fact: we are guilty, sinful, and fallen as we take our first breath.

For some of us, our enemies still compass us about with destruction, and the flames of hell continue to trouble our sleep. We may not fear persecutors and oppressors, or devils with pitchforks. However, we feel bruised if not besieged, wounded if not terrorized. Language that spoke to a vulnerable, beleaguered nation, or to terrified congregations imagining Dante’s demons and the furious flames of a Jonathan Edwards, still haunts many of us today.

The history of salvation theology writ large is the story of our desperate attempts to escape the terrors of eternal torment. The advent of the Protestant Reformation could be said to have been set in motion by such fear. “My situation was that, although an impeccable monk, I stood before God as a sinner troubled in conscience, and I had no assurance that my merit would assuage him,” recalls Luther in explaining the genesis of his personal journey that launched a cataclysm.

We believe that most people both inside and outside the Church “are trying to do right,” as Brigham Young said. “I am in the midst of Saints, or at least of those who profess to be Saints; and if they are not Saints, I think they are trying to become so with all their might.” Yet, we are weighed down. Few of us may feel on the precipice of  damnation, but we all feel wounded and weary. Is there a language that can speak more meaningfully—yet truthfully—to our predicament?

Translators have difficult choices to make. The term most frequently rendered in the King James Bible as save is the Greek word sodzo. And he who saves is the soter, based on that same word. But when Luke used the identical term sodzo, it was to describe Jesus’ act of curing the blind man of his affliction (Luke 18). Mark used sodzo when Jesus made the girl whole from the plague (Mark 5). And Matthew  employed the term sodzo when the hemorrhaging woman, touching the Lord’s hem, was restored to health (Matthew 9). In all these and numerous other cases, the word often translated as save is more aptly rendered heal. Jesus healed the blind, healed the girl of the plague, and healed the woman with the issue of blood. In other words, rather than render the Messiah’s title of soter as Savior, we could with equal linguistic justification call him Jesus Christ, Son of God, Healer of the World.

One virtue of such a substitution is that healing signals the beginning of a glorious journey now unfolding, while saving implies its end. And we are all very much in eternity’s morning. In Joseph’s favorite biblical translation, the word for Savior is das Heiland. Heil is from the verb heilen and means “to heal.” Land denotes a geographical location. Das Heiland could, therefore, be translated correctly as “place of healing.” In other words, our place of healing is Christ. Julian of Norwich emphasized this even more emphatically when she wrote: “The blessed woundes of oure Saviour be opyn and enjoye to hele us.”

Anthony Zimmerman adds yet another dimension to the word sodzo. He notes that the Latin word salvans (our soter in Greek), which Irenaeus “uses to designate Christ’s role, does not have the narrow meaning of a Savior who merely pays a ransom to rescue sinners. The word Savior means to Irenaeus, and to the Greek Fathers typically, the more inclusive role of Sanctifier. . . . [Christ] is more than a repairman who reconditions a damaged product. He is an architect who builds the structure originally according to God’s primal plan, and then reconditions it even more magnificently after Adam’s temporary crash.”

For the saintly Gregory of Nazianzus, “the reconciliation of God and man began to take place at the moment of the incarnation itself.” In the flesh Christ “united to himself a complete and entire human nature, thereby healing it and ennobling it. It is the mind, not the body, that leads us into sin. So it is the human mind that is most in need of being healed and restored.” 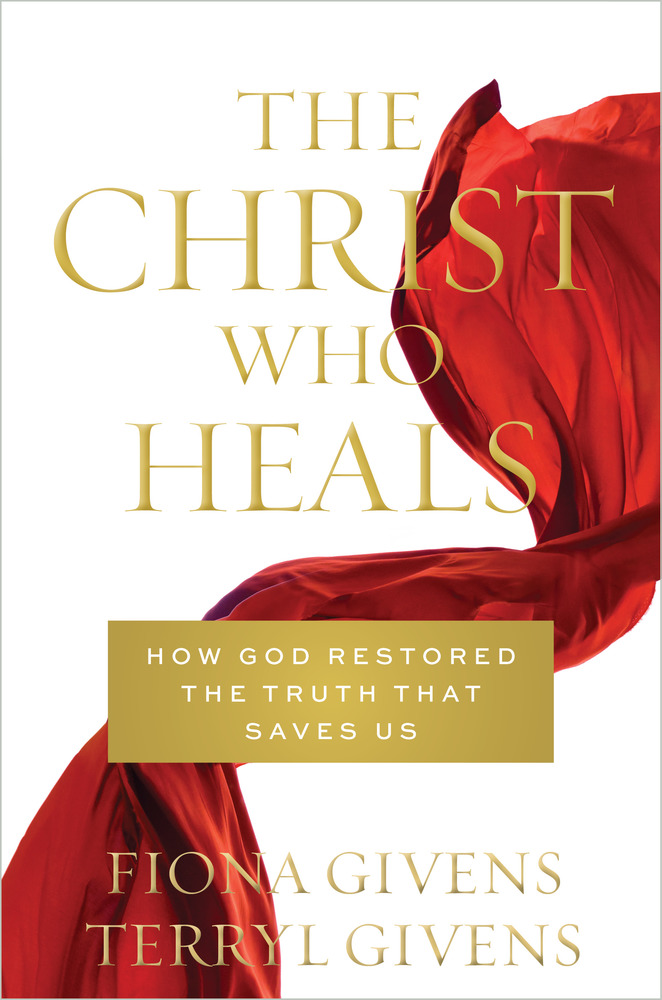 In The Christ Who Heals, Fiona and Terryl Givens explain how in a world increasingly prone to doubt, a foundation in Christ is the only sure basis of a durable discipleship. And for Latter-day Saints, the Jesus Christ revealed through the Prophet Joseph Smith is, in some very significant ways, a different kind of Christ than the Jesus of modern Christianity. The Christ of the restored gospel collaborated with Heavenly Parents for our salvation even before the foundation of the world, "does not anything" save it be for our benefit (2 Nephi 26:24), and is determined to patiently guide and nurture every one of God's children into an eternal heavenly family. Most significantly, this Christ does not rescue us from a condition of original sin or depravity. Rather, He is primarily a healer of the wounds incident to a long-planned sojourn, one intended to immerse us in the trials, pains, and soul-stretching of this mortal schoolroom. He is not only the most remarkable being in the history of religious thought; He is, in fact, The Christ Who Heals.