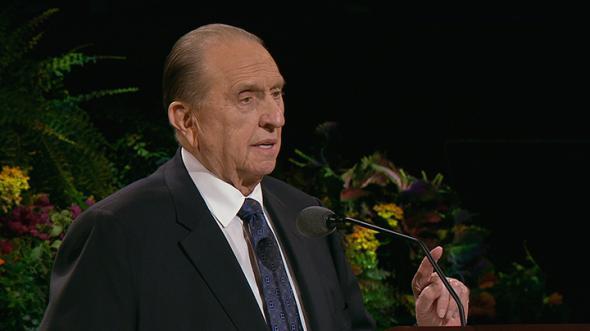 The following is an excerpt from A Prophet's Voice: Messages from Thomas S. Monson.

On sunlit days during the noon hour, the streets of Salt Lake City abound with men and women who for a moment leave the confines of the tall office buildings and engage in that universal delight called window-shopping. On occasion I, too, am a participant.

One Wednesday I paused before the elegant show window of a prestigious furniture store. That which caught and held my attention was not the beautifully designed sofa nor the comfortable-appearing chair which stood at its side. Neither was it the beautiful chandelier positioned overhead. Rather, my eyes rested upon a small sign which had been placed at the bottom right-hand corner of the window. Its message was brief: “FINISHERS WANTED.” The store had need of those persons who possessed the talent and the skill to make ready for final sale the expensive furniture which the firm manufactured and sold. “Finishers wanted.” The words remained with me as I returned to the pressing activities of the day.

In life, as in business, there has always been a need for those persons who could be called finishers. Their ranks are few, their opportunities many, their contributions great.

From the very beginning, to the present time, a fundamental question remains to be answered by each who runs the race of life. Shall I falter, or shall I finish? On the answer await the blessings of joy and happiness here in mortality and eternal life in the world to come.

We are not left without guidance to make this momentous decision. The Holy Bible contains those accounts, even those lessons which, if carefully learned, will serve us well and be as a beacon light to guide our thoughts and influence our actions. As we read, we sympathize with those who falter. We honor those who finish.

The Apostle Paul likened life to a great race when he declared: “Know ye not that they which run in a race run all, but one receiveth the prize? So run, that ye may obtain.”

And before the words of Paul fell upon the ears of his listeners, the counsel of the preacher, even the son of David, king in Jerusalem, cautioned: “The race is not to the swift, nor the battle to the strong.”

Could the son of David have been referring to his own father? Judged by any standards, the greatest king Israel ever had was David. Anointed by Samuel, he was honored by the Lord.

In the first flush of his incredible triumphs, David rode the crest of popularity. In adoration the people exclaimed: “Behold, we are thy bone and thy flesh.” Power he won. Peace he lost.

It happened late one afternoon when David was walking upon the roof of the king’s house that he saw from the roof a woman bathing, and the woman was very beautiful. “And David sent and enquired after the woman. And one said, Is not this Bath-sheba, . . . the wife of Uriah the Hittite?” So “David sent messengers, and took her.” The gross sin of adultery was followed by yet another: “Set ye Uriah in the forefront of the hottest battle, and retire ye from him, that he may be smitten, and die.” Lust and power had triumphed.

David’s rebuke came from the Lord God of Israel: “Thou hast killed Uriah the Hittite with the sword, and hast taken his wife to be thy wife. . . . Now therefore the sword shall never depart from thine house.” David commenced well the race, then faltered and failed to finish his course.

Lest we lull ourselves into thinking that only the gross sins of life cause us to falter, consider the experience of the rich young man who came running to the Savior and asked the question: “Good Master, what good thing shall I do, that I may have eternal life?” Jesus answered him: “If thou wilt enter into life, keep the commandments. He saith unto him, Which?” To Jesus’ enumeration of the commandments, “The young man saith . . . , All these things have I kept from my youth up: what lack I yet? Jesus said unto him, If thou wilt be perfect, go and sell that thou hast, and give to the poor . . . and come and follow me. But when the young man heard that saying, he went away sorrowful: for he had great possessions.” He preferred the comforts of earth to the treasures of heaven. He would not purchase the things of eternity by abandoning those of time. He faltered. He failed to finish.

So it was with Judas Iscariot. He commenced his ministry as an apostle of the Lord. He ended it a traitor. For 30 paltry pieces of silver, he sold his soul. At last, realizing the enormity of his sin, Judas, to his patrons and tempters of his crime, shrieked: “I have sinned in that I have betrayed the innocent blood.” Remorse had led to despair, despair to madness, and madness to suicide. He had succeeded in betraying the Christ. He had failed to finish the apostolic ministry to which he had been divinely called.

Lust for power, greed of gold, and disdain for honor have ever appeared as faces of failure in the panorama of life. Captivated by their artificial attraction, many noble souls have stumbled and fallen, thus losing the crown of victory reserved for the finisher of life’s great race.

May we turn from the lives of those who faltered and consider for a moment some who finished and won the prize.

Following the earthly ministry of the Lord, there were many who, rather than deny their testimony of Him, would forfeit their lives. Such was Paul the Apostle. The impulse of his father to send him to Jerusalem opened the door to Paul’s destiny. He would pass through it and help to shape a new world.

Gifted in his capacity to stir, move, and manage groups of men, Paul was a peerless example of one who nobly made the transition from sinner to saint. Though disappointment, heartache, and trial were to beset him, yet Paul, at the conclusion of his ministry, could say: “I have fought a good fight, I have finished my course, I have kept the faith.” Paul was a finisher.

He admonished us to “lay aside . . . sin” and to “run with patience the race . . . looking [for an example] unto Jesus the author and finisher of our faith.”

Though Jesus was tempted by the evil one, yet He resisted. Though He was hated, yet He loved. Though He was betrayed, yet He triumphed. Not in a cloud of glory or chariot of fire was Jesus to depart mortality, but with arms outstretched in agony upon the cruel cross. The magnitude of His mission is depicted in the simplicity of His words. To His Father He prayed, “The hour is come. . . . I have glorified thee on the earth: I have finished the work which thou gavest me to do.” “Into thy hands I commend my spirit.” Mortality ended. Eternity began.

Frequently His help comes silently—on occasion with dramatic impact. Such was my experience of some years ago when, as a mission president, I was afforded the privilege to guide the activities of precious young men and women, even missionaries whom He had called. Some had problems, others required motivation; but one came to me in utter despair. He had made his decision to leave the mission field when but at the halfway mark. His bags were packed, his return ticket purchased. He came by to bid me farewell. We talked; we listened; we prayed. There remained hidden the actual reason for his decision to quit.

As we arose from our knees in the quiet of my office, the missionary began to weep almost uncontrollably. Flexing the muscle in his strong right arm, he blurted out, “This is my problem. All through school my muscle power qualified me for honors in football and track, but my mental power was neglected. President Monson, I’m ashamed of my school record. It reveals that ‘with effort’ I have the capacity to read at but the level of the fourth grade. I can’t even read the Book of Mormon. How then can I understand its contents and teach others its truths?”

The silence of the room was broken by my young nine-year-old son, who, without knocking, opened the door and, with surprise, apologetically said, “Excuse me. I just wanted to put this book back on the shelf.”

He handed me the book. Its title: A Child’s Story of the Book of Mormon, by Dr. Deta P. Neeley. I turned to the foreword and read these words: “This book has been written with a scientifically controlled vocabulary to the level of the fourth grade.” A sincere prayer from an honest heart had been dramatically answered.

My missionary accepted the challenge to read the book. Half laughing, half crying, he declared: “It will be good to read something I can understand.” Clouds of despair were dispelled by the sunshine of hope. He completed an honorable mission. He became a finisher.

In our chosen fields, the obstacles confronting us may be mountainous in their appearance—even impassable in their challenge to our abilities. Press onward we must, for we understand full well that attacking is not solving. Complaining is not thinking. Ridiculing is not reasoning. Accountability is not for the intention but for the deed. No man is proud simply of what he intends to do. Let us not be deceived. Like the mice who voted to place a warning bell around the neck of the cat, we may mistakenly feel that the problem has been taken care of simply because we have discussed it. To put it another way, machines are not creative or imaginative, nor even responsible. They are simply tools, and tools do not work and serve mankind until skilled hands take them up. Because our tools are growing in complexity and in potential usefulness, we must grow in order to use them both profitably and wisely. Let us not be frightened. Rather, let us be challenged. Only the human mind has the capacity for creativity, imagination, insight, vision, and responsibility. Let us use these capacities to run well our race and to be finishers.

Today I think I shall once more walk by that furniture store in our city and again gaze at the small sign in the large show window, that I may indelibly impress upon my mind the true meaning of its words: “FINISHERS WANTED.”

I pray humbly that each one of us may be a finisher in the race of life and thus qualify for that precious prize: eternal life with our Heavenly Father in the celestial kingdom.

President Monson finds lessons in all kinds of everyday experiences, and he is known and loved for sharing those lessons in a way that reaches the hearts of his listeners. This landmark collection of his greatest messages will be a treasured addition to any gospel library.