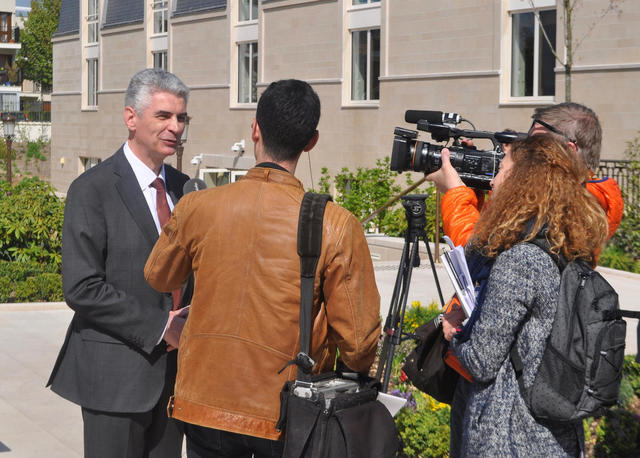 How a Bishop, a Mayor, and a CFO/Publicist Helped Make the Paris LDS Temple a Reality

What do a bishop, a mayor, and a CFO/Publicist all have in common? Each helped make the Paris France Temple a reality, here's how.

In the two decades from the first public mention of a possible LDS Church temple in France to this weekend’s dedication of the Paris France Temple, countless numbers of people on two continents have been involved in the property, planning, design and construction processes.

Among all contributors, three men from France — a bishop, a mayor and a CFO/publicist — played key roles in paving the way for what will become the 156th operating temple of The Church of Jesus Christ of Latter-day Saints.

The three are Bishop Gérald Caussé, the LDS Church’s first France native to be called as a general authority and who currently serves as the church’s presiding bishop; Philippe Brillault, mayor of Le Chesnay, the Paris suburb where the temple is located; and Dominique Calmels, a chief financial officer for a global management consulting and professional services corporation and national director for LDS Public Affairs in France for the past 17 years.

And all three are quick to wave off any such attention.

“There have been hundreds of thousands of people who have been involved in that process. None of us can say ‘I did it,’ because …," said Bishop Caussé, gesturing with a heavenward glance, "… we all know who did it.”

A temple in France was first publicly discussed in June 1998, when then-LDS Church President Gordon B. Hinckley met with some 2,400 church members in Paris. “The time has come when you deserve to have a temple among you,” he said, “and we’ll look for a place to build one.”

Bishop Caussé remembers that day. He also remembers traveling as a youth with his parents to the closest LDS temple for French Mormons, first to Zollikofen, Switzerland, and later to Frankfurt. And he remembers dreaming as a young boy about when France might have its own temple.