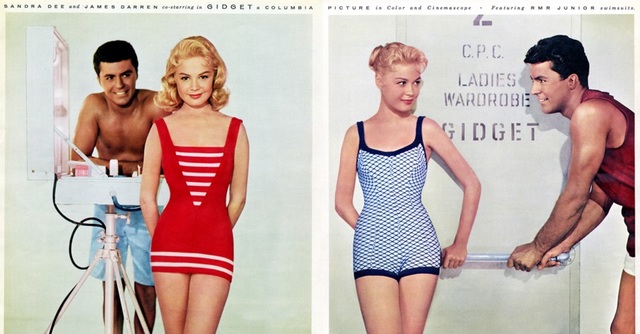 Rose Marie Reid's never compromised her beliefs as she rose to renown in the fashion world. Called “the most prominent Latter-day Saint woman of her generation," she stuck to her standards, no matter what.

For a half-century, the two-piece swimsuit curiously named after a Pacific atoll has been a profitable standard in women’s fashion.

For Latter-day Saint designer Rose Marie Reid, the bikini was a career buster.

In the early 1960s Sister Reid was one of the United States’ most successful businesswomen. Her swimsuit lines defined the burgeoning market, gleaning millions in profits. Hollywood A-listers Rita Hayworth, Marilyn Monroe and others modeled her designs. Her swimsuits — showcased in the sand-and-surf flick “Gidget” — allowed women worldwide to enjoy a bit of the “California Way of Life.”

Sister Reid insisted a swimsuit can be both stylish and modest. When the bikini became a trend she held firm to her beliefs.

Lead image from BYU Library of a 1959 two-page advertisement for Gidget and the Rose Marie Reid’s Juniors swimsuit line.