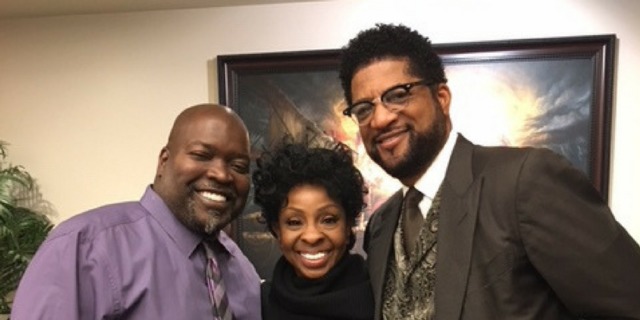 If there were two things Daryl was adamant about, they were the fact that he wouldn’t become a Mormon and that all religions should be respected. “He was very defensive about the Church,” Rachel said. “If anybody would say anything negative about Mormon people or about the religion, he would get very upset.”

One January day in 2014, Daryl and his wife rode past the Gilbert Arizona Temple on their motorcycles. The temple was open for public tours before it’s dedication, and several protestors stood outside wearing temple garments.

“It really bothered me,” Daryl said. “I wanted to jump off of my bike.” They continued riding home, but Daryl couldn’t let it go.

“We went to the store and got a big poster board and I wrote ‘Idiot’ on it and an arrow pointing. I had [Rachel] drop me off at the corner.” 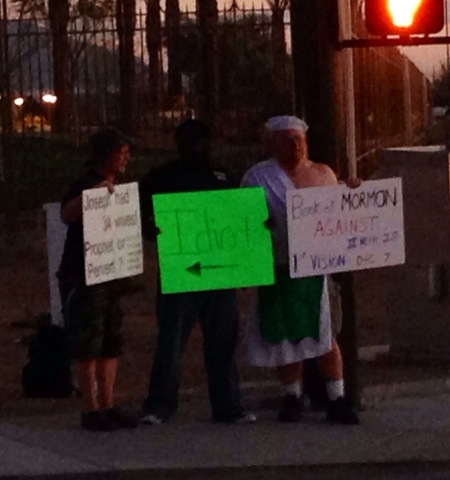 Daryl Planks holding the sign that says “Idiot” in a crowd of protestors at the Gilbert Arizona Temple open house in 2014.

The protestors on the other side of the street saw Daryl and his sign and crossed over to him. “You’re not Mormon,” one man said to him.

“How do you know that?” Daryl asked.

“Because they don’t have the guts to stand out here and do this,” the man said.

“Well, you’re right. I’m not a Mormon,” Daryl admitted. “But I have nothing better to do than stand out here.”

Daryl said that it seemed as if every member of Rachel’s ward drove past the temple that night. He got a lot of honks and waves and even pictures taken by the press.

“It was just so disrespectful, you know. Regardless of your beliefs, you should never disrespect or belittle someone else’s beliefs,” Daryl said.

When Rachel found out that Gladys Knight was coming to town, she immediately secured tickets.

The concert/fireside was six weeks out. Little did Rachel know the next weeks would send her into two surgeries just three weeks apart, the second of which was 48 hours before the concert.

“I was not in any shape to be going anywhere,” Rachel said. She felt strongly, however, that she should still go and that they needed the best seats possible. They got in line about three hours before the concert started, waiting in the hot 100-degree sun.

“She was having a hard time,” Daryl remembers. “I just kept saying, ‘Hey, let’s just go,’ and she wouldn’t.”

“I couldn’t let it go,” Rachel said, with tears. “I just felt so strongly that we had to be there.”

As soon as the concert started, Rachel looked over to see tears streaming down her husband’s face as Gladys Knight sang. “Like I said, I like gospel music. It just does something to me,” Daryl said. He was also amazed to see members of the choir and audience who looked like me.”

Gladys Knight reminded him of his mother, who had passed away several years prior. “When she got up there and started speaking, it was as if my mother was kind of chastising me,” Daryl said.

But it was William McDowell, Gladys Knight’s husband, who changed Daryl’s life.

“He just started having a conversation about his life growing up and his experiences with the Church. Like me, his concern was that there was no one there that looked like him,” Daryl said. “He said we can’t look at it as a race thing. When you look to the left and to the right, that person’s not white. They’re not black. They’re not brown. That’s your brother. That’s your sister. We’re all children of God.”

William McDowell’s speech resonated with Daryl. After the concert, he told Rachel, “I want to investigate the Church.”

Rachel’s eyes lit up. “Are you serious?”