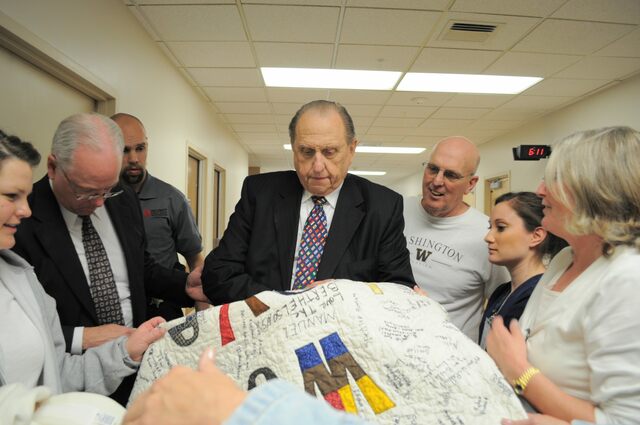 President Thomas S. Monson left behind a legacy of serving and ministering to "the one.” He frequently spoke of the joy that comes from knowing you have been “on the Lord’s errand.”

"The sweetest experience I know in life is to feel a prompting and act upon it and later find out that it was the fulfillment of someone’s prayer or someone’s need," he said in a video produced about his life. "And I always want the Lord to know that if He needs an errand run, Tom Monson will run that errand for Him."

Throughout his life, President Monson shared some of his experiences with service in hopes of inspiring us to feel that joy as well. We remember the story of him finding his friend, who was confined to a wheelchair, sitting by the deep end of the swimming pool on the verge of taking his own life. When the man looked up to see President Monson there in his moment of need, it reminded him of God’s love for him. We also recall his visit with his boyhood Sunday School teacher years later as Brother Brems, his beloved teacher, lay on his death bed. President Monson traced the letters of his name into the palm of his old friend’s hand—T-O-M-M-Y M-O-N-S-O-N. President Monson shared the Spirit he felt as he visited with Brother Brems one last time and gave him a priesthood blessing.

But no doubt there are many other stories from President Monson’s life of dedicated service we haven’t heard. On this week’s episode of All In, Jalyn Shaw shared her husband’s faith in praying for a visit from President Monson after contracting a rare illness and how that prayer was miraculously answered by the prophet.

Listen to the podcast episode with Acey Shaw here or read a full transcript of the interview here.

Morgan Jones: I heard that President Monson came to visit you when [Acey] was in the hospital. Can you tell me a little bit about that? 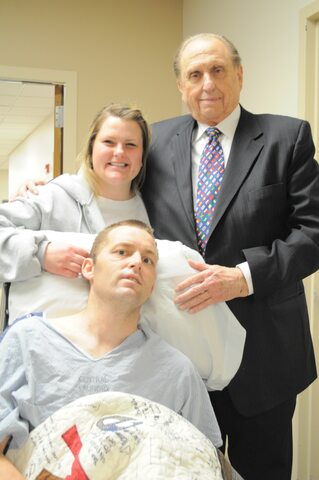 Then I was talking to my dad, and I was telling him about it. And I said, "I don't want him to lose his faith." Okay—I didn't want him to lose his faith. I didn't think about where I was lacking faith. So I just didn't want him to lose his faith and be like, "Oh, Heavenly Father's not even listening to my prayers because I've been praying for him and he's not coming." So it was probably two days later that—and we had been in the hospital for about a month to two months at this point—and so we thought, "[Acey] hasn't been out of this room, we need to get him out of his room so he can just see something other than these walls." So it took, like, three or four people to get him in the chair, we put a neck brace on him to hold up his head because he couldn't even hold up his head at the time, and we're just like, "We're just going to take him outside, have some fresh air, bring him back." We're gone 5 to 10 minutes at the most, and we're on our way back to his room, and we turn the corner and there's President Monson. He's looking out the window, talking to this lady, and so I leaned over to Acey, and I'm like, "Acey, guess what! It's President Monson!" And he looked at me like, "Yeah, I knew he was coming."

And so we just waited until he was done talking to the lady, and he came over and talked to us. He was so gracious and kind and he talked to us for a while, and then he's like, "Hey, can I get Acey's information? Because the apostles, we all meet together Thursday at 11, and I would really like for us to pray for him." So I'm like, "Oh my heck. This is perfect. This is our ticket out of here." We were so excited. I gave him [Acey’s] information, and then he went off and was visiting somebody in the ICU at the time. Then I thought, "Oh my heck, nobody's gonna believe this. No one's gonna believe that we saw President Monson." So I ran back to the room, got our camera, and a friend of ours [had] made a quilt for Acey that everyone [had] signed that went to go see him, so I got the quilt and waited for [President Monson] to come back out. So he comes back out, we talked to him for a little bit longer, and he says, "Hey, do you think Acey would mind if I give him a blessing?" And I'm like, "Oh my heck, this is really what we need. Like, he's gonna be—this is our ticket out. This is going to be great."

► You may also like: 14 Photos of President Monson That Will Make You Love Him Even More

We go into this little corridor area where they take the laundry and take it down the elevator, so we all piled in there. You know when you get a blessing and you already know what you want, right? I was like, "I so want to tell him what to bless him for and with." And I'm like, "Oh my heck, he's a prophet of God. He already knows. He knows what Acey needs, so I don't have to say anything." The whole time I'm like, "Oh, he's totally going to just heal him. I just know what. So he starts to give a blessing, and I'm just hanging on to every word that he says. And the words that I wanted him to say never came. I wanted him to say, "Rise and walk." I wanted him to say, "You're healed." But those words never came. He did bless him with endurance, and patience, and love. But to me, that was just a huge testimony builder where I lacked faith, and Acey never did. He never did lack any faith. But I was just grateful that Heavenly Father, to know He does hear and answer our prayers, even when they seem so impossible that [you think the answer we desire] can't happen, He finds a way to either make it happen or help us through that whole trial.