How did Joseph Smith know Emma was ‘the right person’? Richard Turley and Jennifer Reeder discuss

As far as historians know, Emma Smith never kept a journal. While this can be challenging in some respects, that doesn’t keep historians from knowing a lot about the Prophet’s wife.

In a recent conversation hosted by the John A. Widtsoe Foundation, Richard E. Turley Jr., a member of the foundation’s board and the former managing director of the Church History Department, and Jennifer Reeder, author of the new Emma Smith biography First, discuss the Prophet’s wife. Although their conversation covered a wide range of topics, one part of the conversation regarding how Joseph decided to marry Emma is particularly fascinating.

Watch the entire conversation here or read the excerpt below.

Note: This excerpt has been edited for clarity.

Richard E. Turley Jr.: Now let’s get into something a little more particular. In many cultures around the world where I’ve visited, there’s a high price attached to formal marriage. For example, in some areas of the world where people tend to organize at least informally in tribes, there is often a bride price—a price that has to be paid by the couple before the couple can formally marry. In the United States, couples will delay marriage for an extended period of time to save enough money to have a fancy reception. Let’s talk about Joseph and Emma. How did they decide to tie the knot and at what point did they do that?

Jennifer Reeder: I love the story behind this. I think you’re asking an interesting question about global wedding traditions. I can’t necessarily speak to those because I’m focused on Emma and the 19th century, but I think we can perhaps in our discussion take away some comparisons. So first of all, Moroni had told Joseph in their annual appointment on the [H]ill [Cumorah] that he needed to bring the right person with him. And the first time he met with Moroni, Joseph’s immediate thought was that right person was his older brother Alvin Smith. However, that year, just a few months later, Alvin became sick and died. And so, he . . . continued to meet with Moroni and in 1826, Moroni said, “You have one more chance. You need to bring the right person,” and Joseph didn’t know who that right person was. He had met Emma Hale in 1825 when he went down to the Harmony area to work, and he had boarded on their farm and was impressed with her intelligence and her sincere belief in his experience. So he looked in his seer stone, which was one way that he received revelation, and he saw Emma Hale and he knew that she was the right one—the right one not only to help him procure the plates but the right one to be a companion to him in his life.

And he tells his mother, “I’ve been so lonely since Alvin died, and I really think I’m going to get married and I’m going to marry Emma Hale.” Now, that presented some challenges. Emma’s parents—her mother [Elizabeth Hale] probably more so than her father [Isaac Hale]—[were] very Methodist. And they were concerned about their daughter and concerned about her livelihood and the way that she would be able to have her own family. Many of their children had already married and had stayed close by in Harmony. And many of [their] daughters often married men who weren’t entirely educated or wealthy, so it wasn’t a matter of Joseph’s lack of education or lack of wealth that troubled them. It was the fact that he was claiming to have religious visions and to have the gold plates that they knew existed but that they weren’t allowed to see.

And so when Joseph went to Isaac Hale to request his daughter’s hand, Isaac said, “No, you can’t.” Now, it was tradition at that time that when young women got married that they were married in their father’s home, but he wouldn’t allow that, obviously, he wouldn’t approve of the marriage so. . . . Emma met Joseph in New York and she didn’t leave her house planning on getting married, but she ended up getting married there by Squire Tarbell and they went immediately from there up to Joseph’s family’s home. So they lived there for a few months, and then Emma wrote her father and asked him if he would send her property. Now, this is a time of coverture, which in the United States we don’t practice today, but it was that a woman was covered either by her father or by her husband and she didn’t really own property or anything. And Emma is kind of on the cusp of this change, so she writes her father for permission to get possessions and bring them to Manchester, New York, where she’s residing with Joseph and his family. And her father agrees and sends them up with one of her brothers, but then when the persecution comes to Manchester/Palmyra, Joseph and Emma decide to move back to Harmony. They were there for a couple of years, but there was still a strange relationship with Isaac and when they did, in fact, leave Harmony in the fall of 1830, Emma never saw her parents again and this was very troubling to her. When the news that her father had passed away came by her nephew . . . she was so upset and so sad, and she immediately, for the first time, wrote to her mother and told all about the children that had been born and lost, and the places that they’d lived and invited her mother to come to Illinois. There was great farmland there and some of [Emma’s] siblings did come. Her mother wasn’t in good enough health.

Also, when Emma learned about baptisms for the dead, she was baptized for both her father and her mother, and some friends and relatives. So her family was always really important to her, and I think it is significant that she did in fact leave them to go with Joseph. In fact, that’s one of the verses in Section 25, is that she would “go with [Joseph] at the time of his going” (Doctrine and Covenants 25:6). And she did that. She was committed to him. 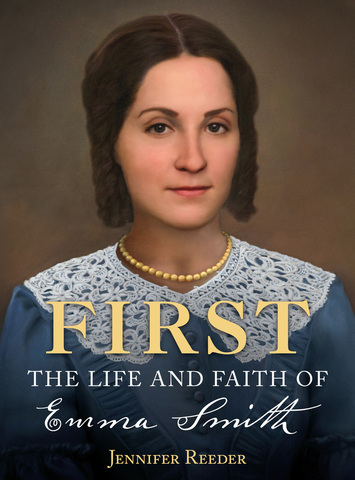 Drawing upon letters written by Emma to Joseph and to many others, along with minutes from Relief Society meetings and other artifacts, this book sketches a more complete portrait of this elect lady. It allows each of us to become personally acquainted with Emma as we learn more about her essential work as a leader, a wife, and a mother in the early days of the Church. First: The Life and Faith of Emma Smith is available now at Deseret Book stores and on deseretbook.com.