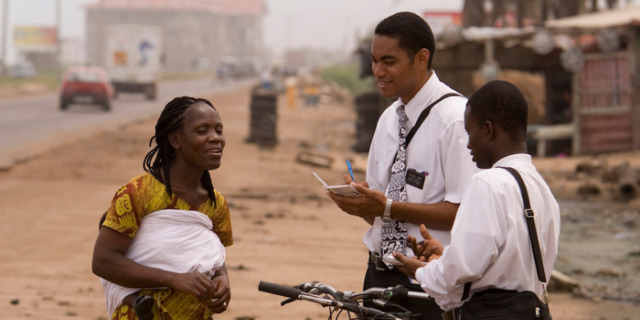 How does serving a mission affect attitudes on global development? What one economist found

Lee Crawfurd was watching The Book of Mormon musical when something clicked—the full-time missionary program of The Church of Jesus Christ of Latter-day Saints could be considered a “natural experiment.” Crawfurd is not a member of the Church. He is an economist who seeks to understand why some people are more interested in helping people in poor countries than others. Crawfurd, who has worked with a few members of the Church who served missions, recognized while watching the play that, unlike many international volunteers who choose where they will go, prospective missionaries face uncertainty. They could learn Swahili to serve in Africa or Portuguese to serve in Portugal or preach the gospel in their own language or own country. Prospective missionaries only know one thing for certain: they will go and do (see 1 Nephi 3:7).

Because of this uncertainty, Crawfurd, senior research associate at the Center for Global Development, considers missionary assignments to be somewhat random. That led him to start asking questions like, “If you spent two years in Africa, are you more likely to think that the American government should give more aid to Africa 10 or 20 years later, whenever, since you’ve served your mission?” By surveying returned missionaries, he realized questions like these could actually be answered.

► You may also like: Elder Sitati shares what Christmas is like in Kenya & how that has helped the Church grow

Why the Study Matters

As a development economist, Crawfurd has found himself all over the world—sometimes without electricity and hot water, sometimes humbled that making a difference often happens slowly, and sometimes shocked behind his computer.

“I’m a data guy,” he says. “I spend all my day looking at spreadsheets and numbers. Sometimes it really takes you aback when you think about the people behind the numbers. It’s like, ‘Wow. Half of the population in this dataset went hungry last week,’ or whatever it is.”

His desire to make a difference dates as far back as a safari trip he took with his mom to Kenya, Tanzania, and Uganda as a 10-year-old. He recalls, “You’re surrounded by children asking you for money or asking you for a pen so they can go and do their homework. It just really took me aback.”

Since then and now throughout his career, Crawfurd has had personal experiences with those in need and affirms that “stories are often more persuasive than data and research.” For example, he met one woman who was receiving $15 a month in aid. “She was gushing,” he recalls. “She was like, ‘It’s amazing. My [child] doesn’t come crying because he’s hungry anymore. I can afford a bit of food so my kids aren’t crying of hunger.’”

► You may also like: What volunteer work taught one man about connection despite differences

Recognizing that even small amounts of money from those in developed countries can go so far in developing countries has led Crawfurd to reflect deeply.

“Something that’s really struck me multiple times has been people in Rwanda or Kenya or somewhere, young people looking to me for advice like, ‘How did you make it?’ I kind of just was born in the UK, right? I didn’t really have to try that hard beyond that.”

He continues, “I think the evidence is clear that where you were born is by far the most important factor for your life chances rather than who you are or what you do, or how clever or hardworking you are. The number one factor is what country you were born in. . . . I think that’s really unfair.”

Because of his profession, Crawfurd has had many life experiences around the world that have shaped his passion for global development. But what about someone who isn’t a development economist? How can that person catch a glimpse of why it’s so important to help those in poorer countries? Crawfurd considered that perhaps a life-changing experience—like a full-time mission—in a poor country could change how people think and feel about serving those in need.

► You may also like: The parts of missionary work we usually don’t talk about and why we need to

In the survey, he asked questions like, “On average, how much money do you currently give to charities that operate in poor countries each year (excluding tithing)?” and “Do you agree or disagree that immigration to the US from poor countries is too high?” (It should be noted that Crawfurd’s study focuses on the personal opinions of the returned missionaries, and that The Church of Jesus Christ of Latter-day Saints is politically neutral.)

What the Results Mean

While Crawfurd admits that he does not have a perfect explanation for the results, he recognizes that the questions in the survey were based on his perspective, as a development economist, of what is important for global development.

He acknowledges, “And some people disagree. Some people think aid is harmful for poor countries. And there are some good reasons to think that, but I really think that the balance and the evidence goes the other way, and there’s enough evidence of positive impacts that I think outweighs the risks of negatives. But ultimately, someone could genuinely care more and be more committed to global development and also think there should be less aid.”

“So it’s interesting to kind of question that a bit—to reflect on your own journey,” he says. “And maybe your opinions would still be your opinions regardless of your experience, but maybe they’ve been shifted a bit.”

Crawfurd expresses his gratitude to all who participated in the study and said collecting the data was a positive experience. “I was really amazed that I managed to get as many responses as I did and that the data managed to work out. Very benevolent, pro-social people in the community,” he says.

Choosing to serve others, including those in developing countries, may bring back great memories from missions. But regardless of whether or not you have served a full-time mission in a developing country, there are many ways to uplift and serve those in need. It all begins with the desire of every prospective missionary: a willingness to act upon the Savior’s invitation to go and do.

► You may also like: 52 ways to give simple, bite-sized service