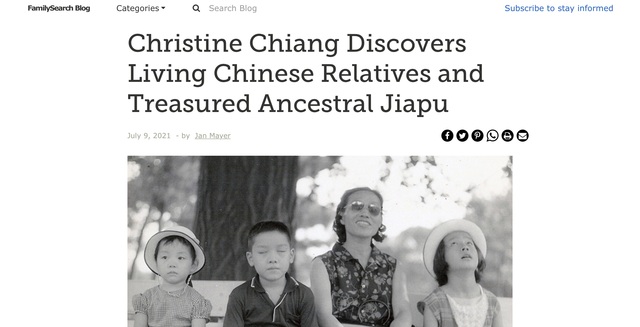 When Christine Chiang took a job with FamilySearch, she had no idea the family history journey that awaited her personally. After being raised in Taiwan to parents who were from mainland China, her parents, sister, and brother were the only relatives she knew personally. As for family history, she could only trace four generations of her family line. But after receiving a call from the police in China notifying her that her brother had died and that she was the only Chinese family member the police were able to locate, she felt inspired to discover her jiapu, the Chinese genealogy book of her clan.

Having very little information and after experiencing a few dead-ends, Chiang’s co-worker and friend, Eric Leach, encouraged her that her efforts would be worth a search and suggested that she create a plan to find her family. But before they could even begin implementing their plan, she received a message on FamilySearch from her great-niece in China. The message opened doors for Chiang.

“Before, I was a loner on my [FamilySearch] team with only 4 generations. There was no way I could find my genealogy. One day I surpassed everyone. I’m the winner with 134 generations!” Chiang told FamilySearch.org. “If it’s not a miracle, I don’t know what it is. I can’t say how much I appreciate what I have. It’s like a dream come true.”