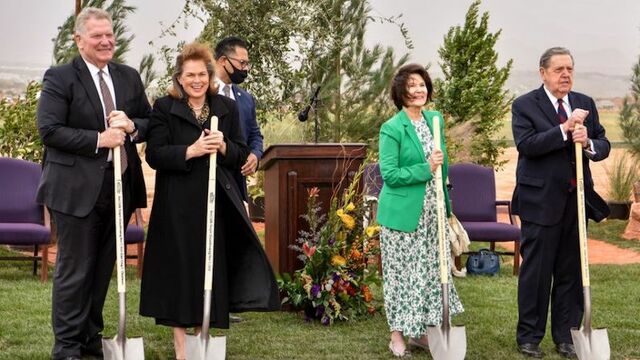 While the pandemic has prevented many Latter-day Saints from attending the temple, it hasn’t kept temple work from moving forward. In the past month alone, five groundbreaking ceremonies have been held. Whether local saints are anticipating the second temple in their city—as with the Red Cliffs Utah Temple—or the third temple in their nation—as with the Salta Argentina Temple—each groundbreaking has been meaningful and unique. Here’s a look at some of the highlights from each one.

“It is one of the great blessings and experiences of my life to have lived for about a third of my life in northwest Arkansas. As I stand here now and think of the faces and the people that I love and the influence that they have had in my life—in Susan's life and in the life of our family—I am filled with deep gratitude and I cannot say the smallest part of what I feel,” the Apostle said, while presiding over the event virtually.

► You may also like: Elder Bednar said 18 temples would start construction in 2020. As of this morning, we know all of them and then some

Sister Bednar also shared her gratitude that a temple would be built in Arkansas.

“I'm grateful that we have a temple coming in northwest Arkansas,” she said. “It thrills my heart. I can't even tell you how grateful I am. I wish that we could all jump for joy and that we could be together to give each other hugs and celebration of this wonderful, wonderful moment.”

The Bentonville Arkansas Temple will be the first temple of The Church of Jesus Christ of Latter-day Saints in the state. Currently, there are over 32,000 Latter-day Saints in Arkansas and nearly 70 congregations. The temple, which will share the site of an existing meetinghouse, was originally announced by President Russell M. Nelson during October 2019 general conference.

Find more about the groundbreaking at Newsroom.

On Saturday, November 7, a groundbreaking for the Red Cliffs Utah Temple was held. Presiding over the groundbreaking was Elder Jeffrey R. Holland, who was joined by his wife, Sister Patricia Holland, and their son Elder Matthew S. Holland as well as Utah Area President Elder Craig C. Christensen and other guests.

Elder and Sister Holland are natives of Southern Utah. Reminiscing on their connection to the area, Elder Holland spoke of how his own ancestor helped build the St. George Utah Temple when the pioneers first settled the area.

"When the St. George Temple was being built some 150 years ago, my great-great-grandfather William Carter was called to strengthen the soil conditions in that soggy, boggy location President Brigham Young had designated,” Elder Holland said.

The Red Cliffs temple is only about a 10-minute drive from that historic pioneer temple, which is currently undergoing renovations and expected to reopen in 2022. According to Deseret News, the First Presidency asked Elder and Sister Holland for suggestions for the temple’s new name.

“Driving through these fields one day, Pat and I talked about what some possible names might be,” Elder Holland said following the groundbreaking. “She looked toward Pine Valley and said, ‘Well, there are sure a lot of red cliffs around here.’ We thought that had kind of a ring to it.”

During the groundbreaking ceremony, Sister Holland shared how her great-grandparents rode about 40 miles in a covered wagon to attend the St. George Utah Temple.

“It’s a happy day because I have the opportunity of being with you, the people I love in the land, our home, that is such a sacred place for all of us. It’s a holy day for me because I do have with me my three children and my husband who have been sealed and will be with me, forever,” she said.

Church News reported that in the dedicatory prayer, Elder Holland acknowledged the sacrifices of the early pioneers who built the St. George temple and said the building is symbolic of the faith and commitment in the area for the past 150 years. He also called the Red Cliffs temple a “sister site.”

The second temple in the city of St. George, the Red Cliffs Utah Temple was announced during October 2018 general conference by President Nelson.

Read more about the groundbreaking ceremony at Deseret News, Church News, and Newsroom.

A groundbreaking was held for the Taylorsville Utah Temple on Saturday, October 31. Elder Gerrit W. Gong presided over the event, accompanied by his wife, Sister Susan Gong. LDS Living writer Jannalee Sandau attended the event and reported about the unique connection the Gongs have to the area:

“‘Sister Gong is a Taylorsville girl,’ Elder Gong shared. In fact, her grandfathers, dating back to 1877, served as bishops in the Taylorsville ward. Later, Sister Gong’s father, Richard Lindsay, was the bishop of the ward when a stake center was built—the stake center that was torn down to make way for the temple. And yet, Elder Gong says, ‘Whether you’re the first generation or the sixth generation, this is still your home . . . and that’s a great thing about this church. We have great diversity, but we have unity in the faith, unity in the House of the Lord.’”

Elder Gong also spoke about the potential the temple has to bless the community.

Celeste Viveros, a young woman who spoke at the event, shared how grateful she is to have a temple built in her city.

“I am grateful to God to live at a time when a temple will be built. Like the Primary hymn’s lyrics, ‘I love to see the temple,’ here, in the city of Salta,” she said.

According to Newsroom, the Salta Argentina Temple will serve 470,000 Latter-day Saints in a country with a population of 40 million people. The temple was announced by President Nelson in April 2018 general conference and will be the third temple in the nation.

Find more about the groundbreaking at Newsroom.

Elder David L. Stapleton, an Area Seventy, gave the dedicatory prayer during the groundbreaking for the Moses Lake Washington Temple, which was held Saturday, October 10.

“Please help us as we not only dedicate this ground but also rededicate our lives to Thee and Thy purposes when this new temple will be completed in all its beauty,” he said. He also invoked “a blessing upon the families of this temple district, that they will raise their children in righteousness and truth, coming frequently to this holy House for divine power and revelation.”

The Moses Lake temple will be a single-story building approximately 20,000 square feet with a center spire and a meetinghouse nearby. The temple was announced by President Nelson during April 2019 general conference.

Learn more about the groundbreaking at Newsroom.