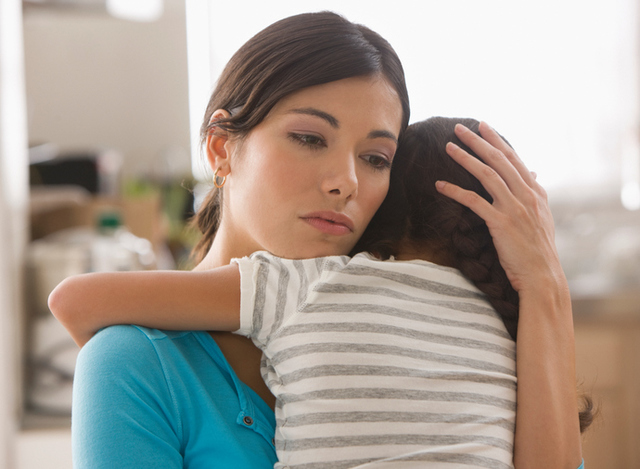 How to Talk to Children About Temple Covenants After a Divorce

Divorce is always, always hard—even when, as President Hinckley has said, it is now and then justified. Here is how we can make the impact of divorce on temple covenants more understandable to our children.

All I ever wanted to be in life was a full-time wife, mother, and then grandmother. When divorce became a reality in my life, it was almost more than I could bear. I could imagine many other sorts of trials and afflictions in life that I could handle, but NOT THIS. I felt like Job when he said, "For the thing which I greatly feared is come upon me, and that which I was afraid of is come unto me" (Job 3:25).

Particularly, I was concerned about my seven children, as you no doubt can imagine.

Divorce is always, always hard—even when, as President Hinckley has said, it is now and then justified [see President Gordon B. Hinckley, “What God Hath Joined Together,” April 1991 General Conference]. So it’s my goal to make the impact of divorce on children more understandable, from both a scholarly and a doctrinal perspective. I want to talk first about the way children might make sense of divorce— emotionally and intellectually, depending upon their age and stage.

How Children of Different Ages Are Affected by Divorce

Very young children can be the least harmed by their parents divorce. As long as they continue to have their attachment needs met—which include, warmth, nurturance, and consistency of care—they will usually be okay. Of course, the strains of family change can take their toll, especially if the primary caregiver, usually the mother, is struggling with her own pain, and therefore cannot maintain a strong emotional accessibility to the child.

Preschool age children are in a place where they don’t yet have the intellectual capacity to clearly understand abstract concepts like time, cause and effect, or the difference between fantasy and reality. They can exhibit what’s known as magical thinking, which may manifest itself in a belief that they were the cause of their parent’s divorce or that they can wish the divorce away.

Children of elementary school age are in a stage where their sense of right and wrong, cause and effect, is very black and white. For example, one first-grade girl who realized that her grandparents were divorced immediately assumed that they therefore hated each other. She could imagine no other alternative. This black and white trait could perhaps work to the child’s advantage, though. A 9-year-old-girl was watching general conference with her single mother when she heard President Faust talking about the impact of divorce on children. As he described the sociological research indicating that children from divorced families are likely to experience more poverty, more crime, and more drug abuse, this young girl said out loud to the apostle on the television set, “That’s not true for me.” Good for her!

Divorce during a child’s adolescence is tricky. Their developmental tasks at this stage include independence, intimacy, and identity. These important tasks may be hastened or delayed as a result of their parents’ divorce. Adolescents may feel—or be made to feel—more responsible for the members of their family at a time when it is more developmentally appropriate for them to be more involved with their peers. They may experience identity confusion as well as heightened or lowered attachment security with their own romantic partners.*

A child’s age and gender influence their perception. There are often  differences between the reactions of girls and boys, even in the same family, and between siblings in the same age range. For example, when told their parents were getting a divorce, one 14-year-old boy said, “I don’t know why you are getting a divorce. You don’t even argue.” At the same time, his 13-year-old sister said, “I’m so glad you’re getting divorced. I can’t stand the tension in this house.”

Of course, a child’s perception of his or her parents’ divorce can change over time. Certainly the magical thinking of a younger child will become more mature and realistic as time goes on. In some cases researchers have documented a “sleeper effect,” especially in girls, which is a delayed negative reaction to a parents’ divorce as the children grow older. Fortunately, children can become more perceptive and realistic about the strengths and weaknesses of each parent as they mature.

Adults who have experienced the divorce of their parents as children can have concerns when the time comes to make their own decision to marry, and especially whether to marry in the temple. Two children from one family I know decided not to get married in the temple because of the negative example of their parents’ temple marriage ending in divorce. In addition, children whose parents were married in the temple and later divorced may experience discrimination from prospective marriage partners or prospective in-laws who are worried about their child marrying someone whose parents got a divorce.

This is admittedly a very brief overview of a complex topic. But with this brief background, let’s now transition to the concept of temple covenants. To help children understand temple covenants after divorce, adults must first understand what happens to covenants following the divorce of a couple who has been sealed in the temple. So let’s clarify what is known.

All covenants are made with God—think of baptism and the temple endowment, for example. In the case of the sealing ordinance, however, the covenant is between a couple and God. God never breaks his covenant with us, but we may break our covenants with him, and/or with our marriage partner. The blessings pertaining to all covenants are contingent on worthiness and must be sealed by the Holy Spirit of Promise to be in effect after this life.

The Holy Spirit of Promise is the Holy Ghost who places the stamp of approval upon every ordinance: baptism, confirmation, ordination, marriage. The promise is that the blessings will be received through faithfulness.

If a person violates a covenant, whether it be of baptism, ordination, marriage or anything else, the Spirit withdraws the stamp of approval, and the blessings will not be received. Every ordinance is sealed with a promise of a reward based upon faithfulness. The Holy Spirit withdraws the stamp of approval where covenants are broken”  [President Joseph Fielding Smith, Doctrines of Salvation, 1:45].

One very important point of clarification is that when a couple that had been sealed in the temple subsequently gets a civil divorce, they have, by definition, broken the sealing covenant. President Faust stated:

What . . . might be “just cause” for breaking the covenants of marriage? . . . I have struggled to understand what might be considered “just cause” for breaking of covenants. . . . Only the parties to the marriage can determine this. They must bear the responsibility for the train of consequences which inevitably follow if these covenants are not honored [President James E. Faust, “Father, Come Home,” April 1993 General Conference].

Three times in this paragraph he refers to divorce as breaking of covenants. One or both of the parties to the marriage can be responsible for the broken covenants. In some cases one party is more at fault, and therefore it is he or she who breaks the sealing covenant.

It is very important to note that in the sealing ordinance in the temple there are many blessings pronounced on the couple besides the sealing itself. I was recently in a sealing session, and I silently counted the number of blessings pronounced in addition to the sealing itself—there were about a dozen separate additional blessings. For this reason, as a general rule, a woman’s temple sealing is not canceled after a civil divorce for the express purpose that the remainder of the blessings may stay intact until a women is preparing to be imminently sealed to another marriage partner.

I know women who believe they are stilled “sealed” to their former spouses because their temple sealing has not been canceled. In fact, those who believe this may understandably be quite angry at a plan that keeps them sealed to someone they divorced in this life. If you know someone who thinks this, please teach them that their sealing to their former spouse is no longer in effect, but the many other blessings promised in the sealing ordinance may remain intact if she remains worthy. Isn’t that a beautiful, comforting and merciful  thought?

It is understood that in the case of a cancellation of the sealing of the woman to the man, this does not cancel the sealing of the children to the parents. . . . [I]f a child remains worthy in this life of celestial blessings, regardless of the actions of his parents, he is . . . guaranteed eternal parentage [Elder James A. Cullimore, Questions and Answers, Ensign, December 1975].

This may seem a bit confusing, or even disturbing to some who think their former spouse unworthy to be sealed to their children. But remember that sealing to children, like all other ordinances, must be ratified by the Holy Spirit of Promise. And this ratification is contingent upon worthiness. Thankfully, God is the judge, and He is able to do His work”  [see 2 Nephi 27:20].

Perhaps a statement from the Church Handbook of Instructions under the heading “Sealing” can give some reassurance:

Members who have concerns about the eternal nature of [sealing] relationships can find peace in the knowledge that Heavenly Father is loving and just. He will ensure that eternal family relationships will be fair and right for all who keep their covenants. [“Sealing,” Church Handbook of Instructions]

Repeat: for all who keep their covenants. For the adults in this group wondering about temple covenants following divorce, please know that what matters is that we, ourselves, as individuals, are faithfully keeping our own covenants. In which case, the promise is that “our family relations will continue for eternity” [see lds.org].