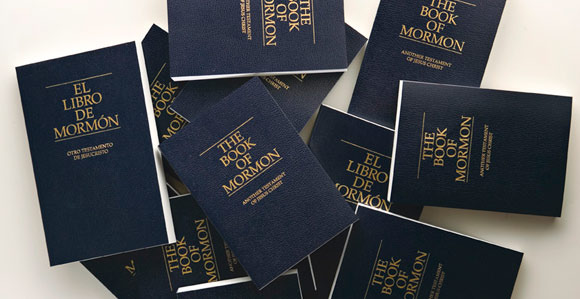 HuffPost: Don't Judge a Book of Mormon By Its Cover: How Mormons Are Discovering the Musical as a Conversion Tool

I met two Mormon missionaries, Elders Skyler Fenn and Jacob Chapman, on a chilly spring evening when my husband and I attended the musical "The Book of Mormon." They were handing out copies of the LDS Scriptures -- aka the original Book of Mormon -- near the theatre entrance, and I couldn't resist talking with them.

I was curious about why they chose this place to market their religion, given that the folks who purchased tickets were walking into a show written by "South Park" creators that involves a liberal dose of cursing and reference to sexual body parts. At one point, a copy of the Book of Mormon gets thrust up the main character's bum, and overall, the missionaries depicted in the musical come off as well-intentioned but naïve.

None of that stopped Elders Fenn and Chapman, though, even though they admitted to me over lunch several days later that they were initially hesitant to proselytize outside of the theatre.