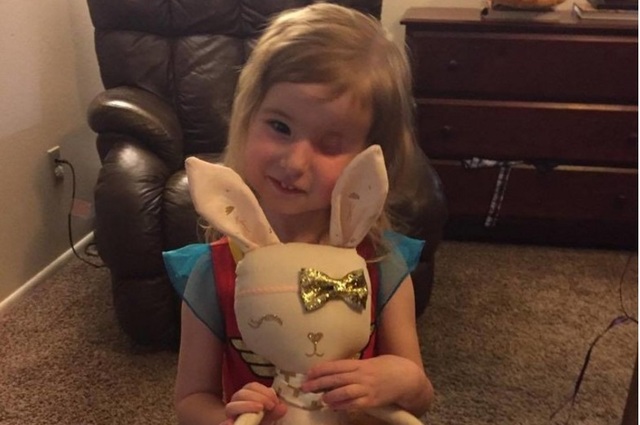 A post by a toymaker on Facebook began gaining traction, making headlines on Today, The Huffington Post, and other major media outlets. Jessica Sebastian of Sebastian Design wrote: "I make dolls, which is not a heroic profession by any means. But recently I was asked to make a doll for a little girl who is a true superhero. A mama contacted me and asked if I would make a bunny doll with one eye for her two-year-old daughter who loves animals and lost her left eye to cancer. The girl had started to notice that she was different and her sweet mama read articles about how finding a doll who matches how a child looks can be helpful and therapeutic. She wanted her daughter to have a doll that looks like her and only has her right eye.

"To date, I don't think I've ever been asked to create something so tender and meaningful.
So here is the adorable little girl on her third birthday, hugging her one-eyed bunny who is just as perfect and beautiful as she is. My favorite part of this photo is how she is wearing her Wonder Woman nightgown. It perfectly represents the strength and courage of this little superhero." Recently, The Huffington Post highlighted this tender story of this LDS mom and her daughter.

A 3-year-old girl who lost her eye to cancer found a special friend in a toy bunny with the same condition.

Danielle Munger’s daughter Brynn was diagnosed with a rare cancer called undifferentiated sarcoma shortly after her first birthday when doctors discovered a tumor behind her left eye. As a result, she had to undergo multiple surgeries and ultimately lost her eye.

Today, Brynn has been in remission for over 16 months. In honor of her third birthday in March, Danielle gave her daughter a custom-made bunny, who also has one eye.

The Utah mom ordered the bunny from Jessica Sebastian of Sebastian Design. Danielle told The Huffington Post she’s a big fan of Jessica’s brand and thought one of her bunny dolls would be perfect for Brynn, who loves animals.