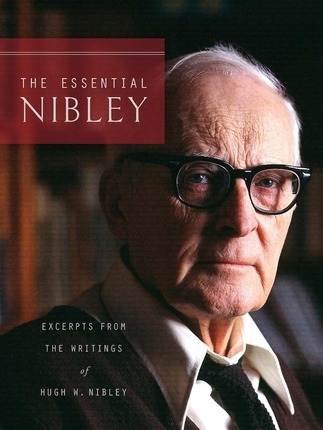 Inside the Brilliant Mind of Hugh Nibley

Hugh W. Nibley was many things: a world-class linguist, historian and scriptorian; a profound teacher, writer, and critic; an unrestrainable enthusiast for everything good and true; and a deeply committed follower of Christ. He left the world a body of research, writings, and speeches of inestimable value.

Recognizing that Nibley is becoming lost to current generations, my personal quest has been to search out the many precious nuggets that are buried is his 9,608 pages of information-dense text (The Collected Works of Hugh Nibley) and cobble them together thematically in a way that's concise, understandable, and enjoyable—and hopefully more available and enduring to many.

The Essential Nibley thus contains histories, studies, and essays ranging from ancient temples to the temple ordinances revealed by Christ during the 40 days after his resurrection; from the Prophet Enoch (who had been "lost" and was "found") to the latter-day Prophet Joseph Smith; and from unique insights into the life of Abraham to ancient documents concerning the childhood of Jesus of Nazareth.

It also contains a rare glimpse into Hugh Nibley, the man: his scholarship, integrity, criticism, humor, and faith.

The Nibley most people know was a devout scholar. This wonderful statement concerning the historical authenticity of the Book of Mormon is typical Nibley: "The only alternative to Joseph Smith's explanation [of the origin of the Book of Mormon] is to assume . . . the existence of a forger who at one moment is so clever and adroit as to imitate the archaic poetry of the desert to perfection and supply us with genuine Egyptian names, and yet so incredibly stupid as to think that the best way to fool people and get money out of them is to write an exceedingly difficult historical epic of six hundred pages. Endowed with the brains, perseverance, and superhuman cunning necessary to produce this monumental forgery, the incredibly sly genius did not have the wit to know, after years of experience in the arts of deception, that there are ten thousand safer and easier ways of fooling people than by undertaking a work of infinite toil and danger which, as he could see from the first, only made him immensely unpopular" (The Prophetic Book of Mormon, 59).

A great example of Nibley's penetrating scholarship is his writings concerning the Jaredites.  He had no more information about the Jaredites than we do; he read the same Book of Mormon and Ether chapters as we do. But most of us in reading them come to Ether after having spent a lot of time with the Nephites; we then take a deep breath (more very dark history coming up) and proceed without pausing to recognize that the Jaredites were an entirely different kind of "civilization" than were the Nephites and Lamanites.

Although "it has only been since the 1930s that the real nature and scope of the epic world has begun to be appreciated" (There Were Jaredites, 290), Nibley at once recognized the ancient Jaredite culture as being a classic epic culture, similar to those of the Egyptians, the Greeks, the Norsemen, and others. He delineates in fascinating detail how epic cultures and histories—and their unique characteristics—have a common origin at the time of the Tower of Babel, the time of great people dispersions and migrations. Fascinating!

Nibley approached Joseph Smith's Jaredite saga with the pithy statement that "The book of Ether, like First Nephi, rings the bell much too often to represent the marksmanship of a man shooting at random in the dark" (The World of the Jaredites, 263).

Nibley's integrity was absolute. All who associated with him knew that he said what he really thought, did all he did for right reasons, and lived in accordance with what he said and did. He was always critical of self-serving, superficial, and pseudo-scholarship. My favorite Nibley jab at the intellectual world is his asking, "What on earth have a man's name, degree, academic position, and of all things, opinions, to do with whether a thing is true or not?" (Abraham in Egypt, 91)

"[The scholars] could . . . speak with perfect confidence because of what I call the gas law of learning, namely, that any amount of information no matter how small will fill any intellectual void no matter how large." (Old Testament and Related Studies, 4)

Nibley appreciated academicians who are honest, who are methodical and forthright, who are direct and don’t flinch, who never temporize and quibble, and who don’t go overboard for any one theory. He warned that "knowledge can be heady stuff . . . it easily leads to an excess of zeal!—to illusions of grandeur and a desire to impress others and achieve eminence." He advised that "our search for knowledge should be ceaseless, which means that it is open-ended, never resting on laurels, degrees, or past achievements" (Approaching Zion, 70).

Though a world-class historian, Nibley never took himself or his work too seriously. "History is all hindsight; it is a sizing up, a way of looking at things. It is not what happened or how things really were, but an evaluation. . . . The modern college teaches us, if nothing else, to accept history on authority. Yet at the end of his life the great [historian] Eduard Meyer . . . marveled that he had always been most wrong where he thought he was most right, and vice versa" (Temple and Cosmos, 440). Nibley clung steadfastly to revealed truth, and as to everything else he maintained that he would not be held responsible for anything he had said or written more than three years ago.

Nibley was also incisive and outspoken, penetrating to the quick and speaking out fearlessly against modern society's foibles. He took on the role of critic and gadfly, targeting many things he saw as false and hypocritical such as the shallowness of much of the academic world, the vain pursuit of wealth, and materialistic and worldly living.

"[He writes of] schoolmen seeking to heighten their prestige, overawe the general public, beguile and intrigue the youth, silence criticism, abash the insolent, and attract an audience and a following by cultivating an atmosphere of recondite, even supernatural, learning and an attitude of lofty superiority to the ignorant masses.  This is still the secret of success in most graduate schools throughout the land." (Since Cumorah, 104)

"What we read about in the Book of Mormon is the 'Nephite Disease'—and we have it! . . . . It is the story of what happened to the Nephites—and we are the Nephites: 'It must needs be that the riches of the earth are mine to give; but beware of pride, lest ye become as the Nephites of old' (D&C 38:39). There it is in a nutshell: it is the fate of the Nephites, not of the Lamanites, Greeks, or Chinese, that concerns us; and that doom was brought on them by pride which in turn was engendered by the riches of the earth" (Since Cumorah, 354).

"'You can get away with anything if you just wave the flag,' a business partner of my father once told me. He called that patriotism" (Approaching Zion, 54).

Nibley's down-to-earth wit was marvelous. He began a fireside speech with "I shall probably bore you tonight, but the subject shouldn't, because it's a very good one. I am not going to be bored at all. I love to talk about this stuff! I will get all excited, so don't pay any attention to me!" (Temple and Cosmos, 264)

I chuckle at how he even poked fun at serious things. "If you pray for an angel to visit you, you know what he'll do if he comes. He'll just quote the scriptures to you—so you're wasting your time waiting for what we already have" (Approaching Zion, 87). And, "If the question of what we will be doing in eternity stumps us, it should. . . . No use trying to figure it out; you will just have to wait and see" (Approaching Zion, 410).

For me, one of his best witticisms was: "When the Lord said, 'There is yet one thing remaining,' namely the law of consecration, the young man could not take it. Many Latter-day Saints, also, are pure Teflon where this principle is concerned'" (Temple and Cosmos, 84).

Above all, Nibley should be remembered as a man of faith.

On June 6, 1944, the first-wave assault on France's Utah Beach saw "Sergeant PhD" Hugh Nibley driving a jeep off an Allied landing craft. The twelve men hanging onto Nibley's jeep urged their driver on as they surged out of the English Channel's waters. A jeep just ahead of them crossed over a sand knoll and was exploded into nothing by an enemy shell.

Hugh had slipped a copy of the Book of Mormon into one of his battle fatigues' pockets. "'It was right there at Utah Beach,' Nibley still vividly recalls, 'as we were all a couple feet under water, that it really hit me—­how astonishing the Book of Mormon truly is. It had never occurred to me before, as far as that goes, but all I could think of all that day was how wonderful this Book of Mormon was'" (Lehi in the Desert, Introduction, xi). A good portion of his subsequent life was devoted to research and study of all that pertains to the Book of Mormon.

Nibley's bottom-line concerning knowledge and spiritual truth is found in an answer to the question of "Won't these documents prove that the gospel is true?" He responded: "No, you'll never prove the gospel. You'll never prove the Book of Mormon or the Bible or anything else. . . . When is a thing proven in science or anywhere else? When you have had enough experience, enough observation, enough thinking, enough testing, enough personal impressions to convince you that it's so. That might not convince another scientist at all. Equally eminent men may have the same evidence in front of them, and when is it proven to one? When he believes it's so. When is the gospel proven to you or anyone else? At the point at which you personally are convinced. . . . That's why we have to have the Holy Ghost and have to listen to the promptings of the Spirit. Otherwise, we're not going to agree on anything. . . . You can't force your testimony onto somebody else—it's nontransferable" (Temple and Cosmos, 323-25).

He was a man of wit, a man of character, and a man of God to whom we can look for shrewd insights and perceptive discernments about the true truth nature of things. In a world of increasing intellectual criticism and historical questioning, some of it admittedly difficult, I find in Brother Nibley's thoughts and writings an iron rod of inestimable value.

Learn more about Hugh Nibley and his teachings in The Essential Nibley.

Drawing from the very best of Hugh Nibley, this collection of excerpts feels more like a guided tour through a brilliant mind than a quote book.

Arranged thematically, it covers the highlights of Nibley's best thinking and writing on everything from the Creation, through ancient people, times, and documents, to modern-day prophets and righteous living today.

Two features give great insight into the man and his life's work: a very personal life sketch about Hugh Nibley written by his grandson, and an introduction about Nibley's contribution to LDS literature and scholarship, his unique dynamic within the Church, and his abiding testimony.

With highlights drawn from nearly 10,000 pages of the Collected Works of Hugh Nibley, The Essential Nibley shows how Nibley continues to give thinkers something to believe in and believers something to think about, even today.