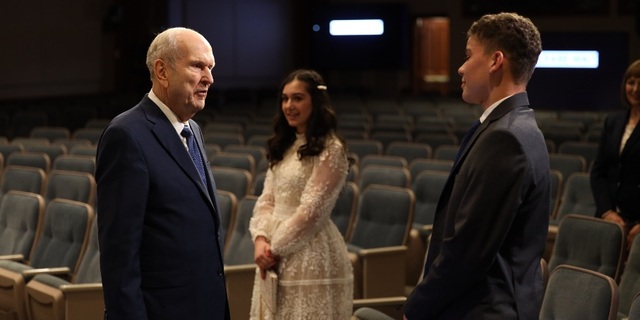 Is This the First Time Youth Have Spoken at General Conference?

On Saturday evening, Church members were surprised when two youth, Sister Laudy R. Kaouk and Brother Enzo S. Petelo, were announced as speakers during the special session of general conference. You may have asked, like us, if this was the first time a teenager has spoken in general conference. The answer? No.

Ironically, Matthew S. Holland, who was called on Saturday afternoon as a General Authority Seventy, spoke in conference 37 years ago as a 16-year-old. Prior to his call Saturday afternoon, Holland, son of Elder Jeffrey R. Holland, was serving as a mission president in the Raleigh North Carolina Mission, but in April 1983, he was a young man who spoke to the membership of the Church about the influence parents and family have upon youth in the Church.

“Make your homes like heaven,” a young Matthew Holland said. “Let them be a place where sons and daughters can learn, grow, ask, and express themselves free of criticism and to an open ear and heart.”

His talk, titled “Muddy Feet and White Shirts,” can be read here.

Earlier instances of teenagers speaking in general conference include in October 1968, when a deacon, priest, and teacher each spoke in the priesthood session of that conference.