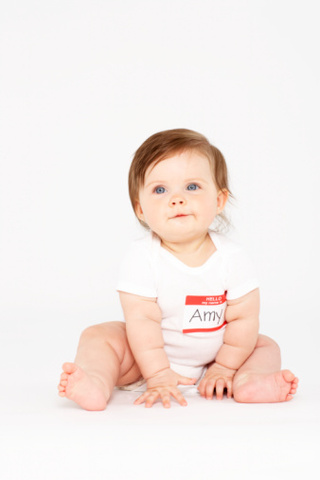 Jacob & Isabella most popular names of 2010--but not for Mormons

Earlier this month, the Social Security Administration released the list of most popular baby names for 2010. Topping the list are Jacob for boys and Isabella for girls.

Does that combination ring any bells? If you’re a fan of Stephenie Meyer's Twilight (or even if you aren’t), you probably recognize them as the teen werewolf and aspiring vampiress of the book series. Twilight was released in 2005, and for the past two years, Jacob and Isabella have been the most popular baby names in the country. Columnists are calling it “The Twilight Effect.”

But in the two states with the highest concentration of Mormons, Utah and Idaho, the most popular baby names do not come from Twilight characters. In those states, William and Olivia held the top spots for 2010. So if Mormons are not entirely swayed by “The Twilight Effect,” what are the trends for Mormon baby names?

The name Jacob has actually been one of the top five U.S. boy names since 1995. Biblical names for boys have been popular for years, both nationally and for Mormons. Recently rising in popularity are Biblical names ending in “h" like Elijah, Noah and Micah. But the old standbys still remain the most popular. Michael held the top spot from 1954 until 1998, except for one year when it was second. What finally knocked it off in 1999? Jacob. Ranging from Old Testament prophets like David and Joshua to New Testament apostles like Matthew and Andrew, Biblical names will likely never go out of style.

The Mormon community has its own unique options for baby names. Book of Mormon names are a decidedly Mormon variation on the Biblical name variety. You may encounter a few Ammons, Nephis, Abinadis or Moronis. Some names come from both the Bible and the Book of Mormon, including Sam, Benjamin and of course, Jacob.

Another Mormon baby name option is using the names of general authorities. Surnames of prophets offer parents a unique option for first names—Benson, Maxwell, Kimball and others. One couple gave their son the middle name of Gordon because he was born just days after President Hinckley passed away.

The perfect example of a general authority name is Spencer. The Baby Name Wizard, a website that collects and analyzes baby name data, has a feature called the NameMapper which shows that Spencer first became popular in states with a greater population of Mormons. Idaho, Utah, Montana and Wyoming all had many Spencers born around the beginning of President Kimball’s ministry as the twelfth president of the Church. From there, the name gained popularity across the country until the mid 90s.

With so few women named, scriptural sources leave few options for girls’ names. Still, the name of a Biblical woman was the most popular of the last 100 years. The nearly 3.7 million Marys born since 1911 are more numerous than the combined numbers of Patricias and Elizabeths, the next-closest contenders. In this area, the Book of Mormon is not much help because only three women are named—Sariah, Abish and Isabel.

Because of the lack of scriptural women, Church history may be another source parents are using to name their daughters. Emma, possibly after Joseph Smith’s beloved wife, has been gaining popularity since the early 90s and remains one of the top three names in the country. Emma was the number four name in Utah for girls in 2010.

Whatever the source of a baby’s name, one fact is certain: parents will continue to name their children after people they admire.