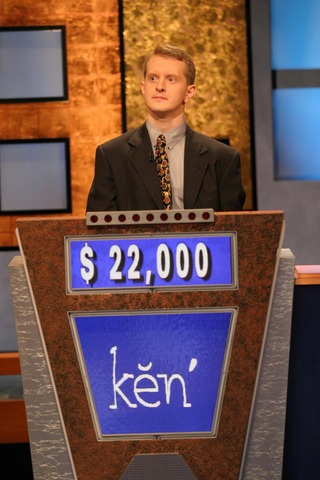 Q: When did your interest in trivia begin?
A: Pretty much as far back as I can remember. I remember running home from school to watch Jeopardy!, and that was fourth or fifth grade. I actually wrote a book about trivia geeks, and I did sort of get the impression talking to them that it was written in their genes somehow. Trivia geeks are born, not made.

Q: How did your Church membership influence your thirst for knowledge?
A: Mormons don’t just believe but actively teach that most of what you gain in this life you cannot take  with you. One of the only things that you can gain that will come with you at some future time is not your bank account, not your car, but the stuff you learn, what you have in your head. And I think that sank in when I was a kid—that my toys were temporary, but if I learned something, that could be forever.

Q: Before you auditioned, did your wife help you practice?
A: I would watch the show every night, and she would keep score and let me know what I missed, so she was team statistician or something. I’d actually stand behind my recliner as if I were at the podium and one of my kid’s toys I would use as a makeshift buzzer, and she would follow along and keep tally of my
score and which categories I had blown questions in.

Q: You majored in both English and computer science. How did those two very different fields of study help you as a contestant on Jeopardy!?
A: I’ve always been sort of a jack-of-all-trades kind of guy, and that does kind of go with being a master of none. Jeopardy! knowledge tends to be very broad but very shallow—a little bit about a lot rather than a lot about a little—and that’s the kind of short attention span I have always had.

Q: Did your beliefs ever come up on the show?
A: I think we talked about tithing once because [Alex] Trebek was just curious. He was like, “So you’re a Mormon. Does that mean you’re going to donate to your church?” At the time it was a pretty sizable check, and he seemed impressed. It was a chance to talk about the Word of Wisdom on national TV, talk about tithing on national TV. You don’t get too many of those chances. I felt at times like I was serving a second fulltime mission, except this time being much, much better paid.

Q: How has winning big on Jeopardy! changed your life?
A: I was a frustrated English major who wanted to write but had to program instead. And after getting off the show I got an offer to write a book, so now I write full time. I’m not in an office cubicle writing JAVA code from nine to five anymore. It’s literally changed almost every aspect of my life.

Q: Did you feel you were representing the Church as a contestant?
A: I just wanted to be myself. I wanted people to see that Mormons are not a monolith—they’re not all clones being stamped out by some factory in Salt Lake City somewhere. Despite all the stereotypes, some Mormon might not live up to all of them.

Q: Are your kids following in your trivia-loving footsteps?
A: They seem to have gotten whatever the chromosome is for trivia. My son is the typical eight-year-old spouting facts from the Guinness Book of World Records, so I can very much imagine him breaking all my Jeopardy! records someday. My daughter’s a little younger, so it’s hard to tell, but I would not be surprised.

Q: How did you react to the invitation to compete against a computer?
A: I said, “Absolutely.” Are you kidding? For one thing, it’s always fun to play Jeopardy!, and I would never turn down the chance to go back. But also, just as a computer engineer by training, the idea that somebody was building a supercomputer just to play me—that was exciting, and I wanted to see if I could get it.