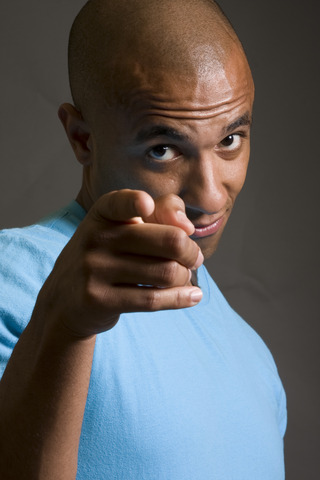 Q: You starred in one of the most viral internet videos for 2010 and you just graduated; what’s next?
A: Originally I was going to get a nine-to-five job, but I’m finding I can’t do it. Sitting at a desk would kill me. I’m getting more into entertainment. Right now I’m doing a Youtube Channel for fun to see where it will go. I’m trying to get into corporate entertainment. I do standup comedy and I’m putting together a show that’s more universal that is a mixture of standup comedy, dancing, and singing.

Q: Who’s your comedian-hero?
A: I don’t want to be cliché but I’d say Bill Cosby. When people think of comedy today, they think of profanity. The ones who are mainstream and who make the most money are universally accepted because they are clean. You could take a 5 year old to a Bill Cosby show and it would be okay.  He’s an innovator when it comes to comedy. His style is completely different. He uses stories but he intertwines little small jokes between the stories. That’s what makes it great.

Q: Who do you think is hysterical?
A: I think Bill Cosby and Eddie Murphy are hysterical. Hysterical. If you can watch a clip of somebody on your computer in your room by yourself and they can make you laugh out loud, you know they’re hysterical and both those people can do that. I think Kevin Hart is hysterical.

Q: What’s the hardest thing you’ve had to deal with as a comedian?
A: Some people are uptight too much and sometimes you have a crowd where you have to let them know it’s okay to laugh. There’s a difference between satire and reality and comedy gives you a chance to break away from reality. Some people are so conservative sometimes that they fight you a little bit. As a comedian you have to take risks. You have to be vulnerable and true to who you are.

Q: How do you deal with it?
A: I feel when you break that barrier you’re good. You’ve got to get people to trust you. I think there’s a lot of trust when it comes to comedy. You have to tell yourself, “Hey I’m just gonna be me,” and you have to have thick skin sometimes. You have to be able to accept the fact that some people are going to love you and some are going to not like you.

Q: When you’re not on the stage or thinking about your next act, what occupies your time?
A: I’m pretty chill as a person. People would be surprised. They think I’m crazy all the time but I’ll just be chillin’ at my house. I like to exercise a lot. I like to sing, dance. I spend a lot of time with my girlfriend.

Q: What is your advice for aspiring comedians?
A: Be who you are. People can tell when you’re being fake. It turns people away. At some point people are going to realize it’s not you. Be honest with who you are. Half of the stuff I’ve done is just me being me.  You definitely have to follow pop culture. People want to hear my twist on it. Recognize what you’re good at and do it.

Q: What is the essential element to stand-up for you?
A: Apple juice. That’s like my stage drink. I perform better when I don’t think about myself. The more I worry about what I’m going to do, the worse I do. My biggest element is physical comedy. I think that’s what makes it more universal. I can have a clever joke, but if I’m dancing, it can cross cultures more than a specific insight. I’m very personality based. It’s more than just a joke.

Q: Do you feel like you always have to be in “perform mode”?
A: I think people expect me to always be like that. I think some kid one time was like, “Oh, I had a class with Stephen Jones, and he seems really quiet.” We’re talking about biology, man. I’m trying to listen in class. I’m pretty balanced. I know how to turn it on when I have to turn it on. I would die if I was always as crazy as I am on stage.

Q: What has been your greatest accomplishment?
A: I’d say college.  Statistically, I should have 5 kids right now. I’m a single, 27-year-old man. I come from a divorced family and my dad has never been to college. There are a lot of people who’ve been through what I’ve been through and they have four illegitimate kids and they’re just doing whatever.  I should be a different person and I’m not and I think it has to do with the examples from Church.  When I say college, I don’t just mean some piece of paper, I just mean, I should be somewhere else.

Q: What gets you out of bed every morning?
A: No matter where I work, the fact that I can make people smile. I’m always entertaining someone. The ability to make people smile keeps me going. Interaction with people is what gets me going. I’m an extrovert at heart. I’m an ENFJ [Myers-Briggs personality type].

Q: If you could be a master at any hobby or sport, what would it be?
A: I wish I was good at math, man. I’m terrible at it. I wish I were better. But I really wish I could play the piano. I’ve always wanted to play the piano.

Q: When did humor become a big thing for you?
A: Ever since I can remember, I’ve always been the kid who would imitate things on TV and movies. I would leave funny messages on the machine. In third grade, I had this message: “You have reached 3857803. We’re not home right now as you can see. So leave a message at the tone and we’ll get back to you on the telephone. Peace.” My mom would wake me up in the middle of the night to entertain. I would imitate stuff and dance. I was always an opinionated person and I was always loud and I’d have my own twist on things. My mom would say, “Do that thing you do,” and at first I was kinda shy, but I got used to it.