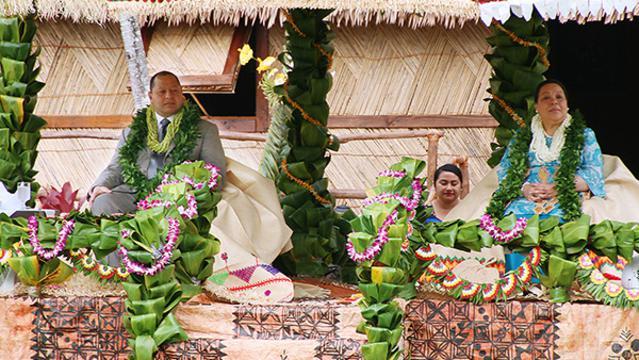 “It’s also useful to observe that the PCC is a place to mature in character, where students can develop and gain strength in their own individual traits in a safe and guided environment," King Tupou VI said. "Character is what makes us what we are in the long run. It is what we become for the rest of our lives.”

Specially invited dignitaries and guests as well as hundreds of BYU–Hawaii students and Tongan community members joined His Majesty King Tupou VI, King of Tonga, and Her Majesty, Queen Nanasipau’u, and members of their entourage for the “grand reopening” of the Polynesian Cultural Center’s recently renovated Tongan Village.

The Tongan royal couple reigned over the program on a beautiful Saturday morning, June 11, 2016, while sitting on a raised throne-like dais in front of the PCC’s fale fakatu’i or scale-replica of the late Queen’ Salote III’s summer palace. The queen authorized its construction when labor missionaries, including a large contingent from the South Pacific, were building the Cultural Center in the early 1960s. The PCC opened on October 12, 1963.

In opening the program, PCC president and chief executive officer Alfred Grace, who is originally from Turangi, New Zealand, said, “Here then in this beautiful Tongan village, we encapsulate all that is significant, worthy and meaningful to the Polynesian Cultural Center. It is a showplace for a magnificent culture. It is a place of growth and financial support for BYU–Hawaii students and community employees; and it is a place that will bless all who visit.”