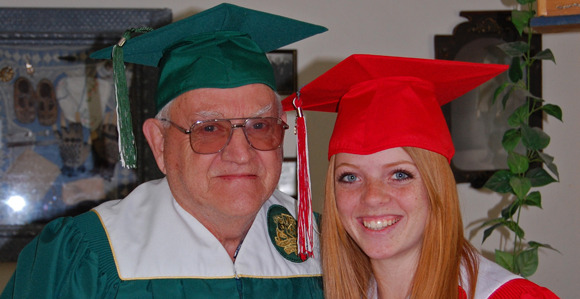 Just before another crop of graduates received diplomas at Bonneville High School in Idaho Falls, Idaho, on May 23, a man from an earlier generation obtained his.

It was a moment far too long in the making.

In January 1952, Ken Thomas of the Iona 2nd Ward, Iona Idaho Stake, was just months shy of graduating from high school. Though he was enjoying his senior year, he joined the Marines, as the United States was in the midst of the Korean War. In the ensuing months, he fulfilled the necessary requirements to receive his GED while in military training. He spent more than 13 months in Korea and returned home on Christmas Eve of 1953. He married Carmen Jacobsen in November of 1954 and began attending Ricks College in Rexburg, Idaho. When the couple started to have children, Brother Thomas left school so he could better support his young family. His plan was to one day return to the classroom.