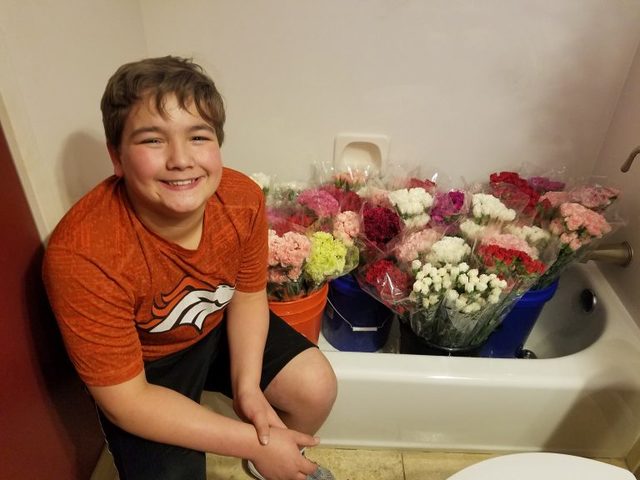 LDS 8th Grader Gave 947 Girls Flowers in His Jr. High (and Paid for It All by Himself)

Matt Strock, an English teacher at American Fork Junior High, looked across his class of squirrelly students and posed a very simple question:

“Do you want to be a walnut tree or a marigold?”

Popular among educators, the concept is based on an age-old gardening strategy. If you plant marigolds, most vegetables and plants will flourish around them. The marigold protects, encourages and nourishes its neighbors.

On the other hand, be careful what you plant next to a walnut tree. They produce a toxin that stunts growth, wilts and eventually destroys its nearby friends.

Strock had explained how the students might choose to be one or the other. By the way, they treat classmates, they could inspire, encourage and help others around them grow and find their potential. Or, they could discourage, diminish and poison them.

Ryan, an energetic eighth-grader, instantly knew the answer and practically shouted it aloud when he walked in the door after school. “I want to be a marigold!”

With a pad of sticky notes, Ryan launched his personal marigold project by leaving anonymous uplifting notes on desks and lockers. Soon he was leaving a few coins on snack machines. Next, he was buying roses a dozen at a time and giving them to girls he discerned needed a little boost.

The genuine gestures, performed with pure motives and no expectations, were a big hit.

Fueled by their thanks and wide smiles, an idea began to grow. By Thanksgiving of last year, Ryan had an idea larger than a floral shop.

Ryan described the experience in a recent phone call. “After a few times, after seeing how good it was going, I decided to take it to a bigger scale. I wanted every single girl in the school to get a flower.”

Remembering last Valentine’s Day and how some girls had more flowers and gifts than they could carry and others had nothing, Ryan made a goal to present a carnation to every girl at American Fork Junior High.

Ryan earned money through odd jobs around the house. He worked alongside his father, cleaned the garage and did the dishes. He even took a gig painting his sister’s bedroom. “My dad helped me with that one,” he said with a laugh.

Other relatives pitched in and Ryan saved like a stingy banker. In December, with the budget mostly in hand, Ryan and his mother began researching online and they finally made the purchase.

A few days before Valentine’s, huge boxes arrived at their front door—straight from Colombia. The total tally? A thousand fresh-cut carnations.

“I was really excited!” Ryan said. “I was like so happy this was really happening. Some people said I’d never get all the money on time. But I always knew I could do it.”

With some happy helpers, Ryan unpacked and prepared 947 carnations for 947 young ladies. One by one he tied a small card to the stem with a variety of inspiring messages.

On delivery day, only the school administration and a tight handful of Ryan’s friends knew what was about to unfold. In just one hour, Ryan and his team went into every class asking each young lady to stand for a smile and a flower.

Ryan was overwhelmed at the reactions. “They were so happy. A few girls even cried. I couldn’t believe it! It felt really good because I didn’t even know all of them. I think me giving them a flower caught them off guard, and their reactions caught me off guard.”

Photos soon popped up on social media. Girls were happy, mothers were thrilled, and everyone learned a lesson about love.

Naturally, Ryan learned more than anyone. “Honestly, it was the best day of my life. I learned to put others ahead of yourself. It makes you feel good when you do. It was amazing to see them feel so good.”

Ryan concluded our call with his belief that everyone deserves to be loved.

He’s right. And loved is exactly how you feel when you’re planted next to a marigold like him.

Jason Wright is a New York Times, Wall Street Journal, and USA Today bestselling author and Jason is a weekly columnist for the Deseret News and Northern Virginia Daily. Articles by Jason have appeared in over 50 newspapers and magazines across the United States. He is the author of many inspiring books, including The Wednesday Letters. Read more from Jason on his blog, Jasonfwright.com.