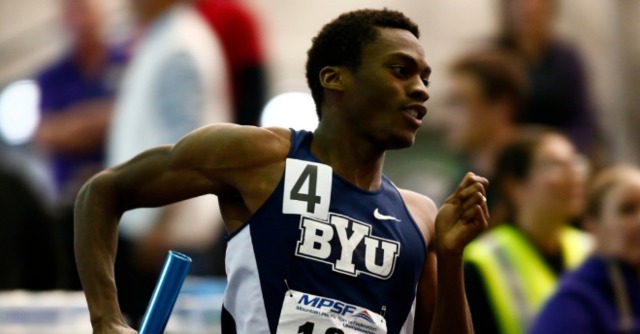 Shaquille Walker has been a star since the second he stepped on campus at BYU. The middle distance runner came to college a two-time Georgia state champion in the 800 meter (half-mile) run, then proceeded to really excel—breaking school and national records and earning All-American Honors. Sadly for BYU fans, Walker recently announced he would forego his senior season and join a professional running team.

His first race as a member of the Brooks Beasts Track Club was a big one—the Olympic Trials at Hayward Field in Eugene, Oregon. Expectations for the former Cougar star were high, and for most of the race, it seemed as though he would qualify for the U.S. Olympic team.

But with about 50 meters to go in the race, disaster struck.

Walker pushed his way down the home stretch in lane 1, where he'd sat since the final turn. Another runner accelerated directly behind him, and their feet were tangled. His opponent fell to the track while Walker stumbled and lost momentum, losing his place near the top of his trial.

Walker was initially disqualified for interfering with another runner, but after an appeal from BYU track coach Ed Eyestone, his time (which was adversely affected by the incident) was allowed to stand. However, it wasn't enough, as Walker's stumble knocked him down to 10th place—just two spots out of an Olympic berth.

Walker stated on Twitter that he was "heartbroken to have [his] Olympic dreams dashed." But not everything is bad for him right now. Just days after the Trials, he ran a blistering 1:46 800m, winning his first professional race and shattering the meet record.

Walker is a returned missionary and an active Latter-day Saint. His profile on Mormon.org is particularly impressive. There, Walker shares his testimony and details his conversion.

"One night I felt very distinctly that I should pray AND read from the Book of Mormon," he said. "I had never before put any effort into reading it because I didn't believe it was true. I want you all to know that I do now know that it is. That night as I read and prayed I came to know that God lives and that the Book of Mormon is His word. It was through reading, pondering (thinking), and praying that I came to know. In a very real way, I received a witness that God was, is, and always will be there. If you do not believe me, that's ok. Don't take my word for it. Just try it."

Photo from The Daily Universe